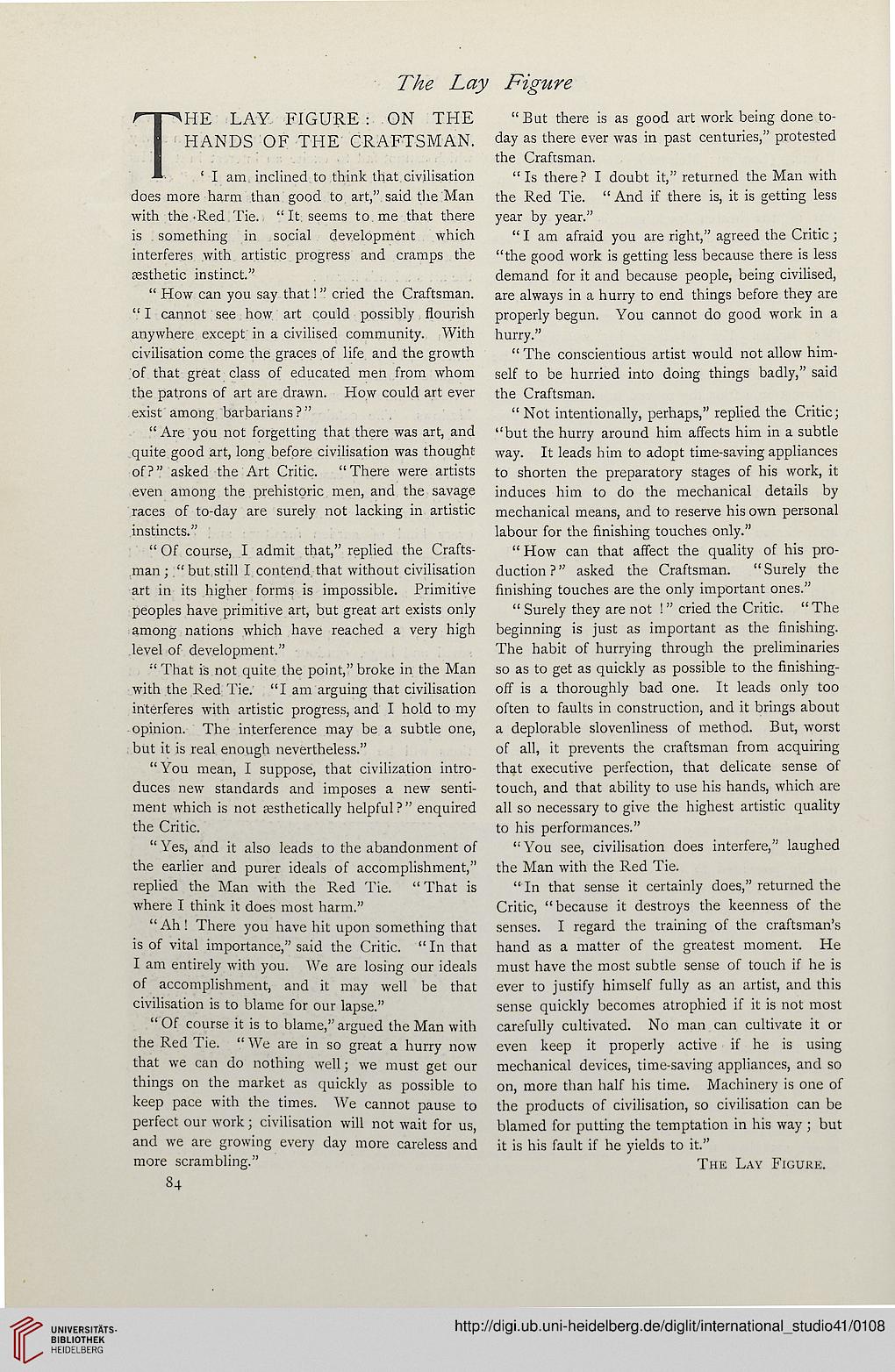 THE LAY FIGURE : ON THE
HANDS OF THE CRAFTSMAN.
' I am inclined to think that civilisation
does more harm than good to art," said the Man
with the-Red Tie. " It. seems to me that there
is something in social development which
interferes with artistic progress and cramps the
aesthetic instinct."

" How can you say that!" cried the Craftsman.
" I cannot see how art could possibly flourish
anywhere except in a civilised community. With
civilisation come the graces of life and the growth
of that great class of educated men from whom
the patrons of art are drawn. How could art ever
exist among barbarians?"

" Are you not forgetting that there was art, and
quite good art, long before civilisation was thought
of?" asked the Art Critic. "There were artists
even among the prehistoric men, and the savage
races of to-day are surely not lacking in artistic
instincts."

" Of course, I admit that," replied the Crafts-
man ; " but still I contend that without civilisation
art in its higher forms is impossible. Primitive
peoples have primitive art, but great art exists only
among nations which have reached a very high
level of development."

" That is not quite the point," broke in the Man
with the Red Tie. "I am arguing that civilisation
interferes with artistic progress, and I hold to my
opinion. The interference may be a subtle one,
but it is real enough nevertheless."

" You mean, I suppose, that civilization intro-
duces new standards and imposes a new senti-
ment which is not aesthetically helpful?" enquired
the Critic.

" Yes, and it also leads to the abandonment of
the earlier and purer ideals of accomplishment,"
replied the Man with the Red Tie. "That is
where I think it does most harm."

" Ah ! There you have hit upon something that
is of vital importance," said the Critic. " In that
I am entirely with you. We are losing our ideals
of accomplishment, and it may well be that
civilisation is to blame for our lapse."

"Of course it is to blame,"argued the Man with
the Red Tie. " We are in so great a hurry now
that we can do nothing well 3 we must get our
th ings on the market as quickly as possible to
keep pace with the times. We cannot pause to
perfect our work; civilisation will not wait for us,
and we are growing every day more careless and
more scrambling."

"Bat there is as good art work being done to-
day as there ever was in past centuries," protested
the Craftsman.

" Is there? I doubt it," returned the Man with
the Red Tie. " And if there is, it is getting less
year by year."

" I am afraid you are right," agreed the Critic ;
"the good work is getting less because there is less
demand for it and because people, being civilised,
are always in a hurry to end things before they are
properly begun. You cannot do good work in a
hurry."

" The conscientious artist would not allow him-
self to be hurried into doing things badly," said
the Craftsman.

" Not intentionally, perhaps," replied the Critic;
"but the hurry around him affects him in a subtle
way. It leads him to adopt time-saving appliances
to shorten the preparatory stages of his work, it
induces him to do the mechanical details by
mechanical means, and to reserve his own personal
labour for the finishing touches only."

"How can that affect the quality of his pro-
duction ?" asked the Craftsman. " Surely the
finishing touches are the only important ones."

" Surely they are not ! " cried the Critic. "The
beginning is just as important as the finishing.
The habit of hurrying through the preliminaries
so as to get as quickly as possible to the finishing-
off is a thoroughly bad one. It leads only too
often to faults in construction, and it brings about
a deplorable slovenliness of method. But, worst
of all, it prevents the craftsman from acquiring
that executive perfection, that delicate sense of
touch, and that ability to use his hands, which are
all so necessary to give the highest artistic quality
to his performances."

"You see, civilisation does interfere," laughed
the Man with the Red Tie.

" In that sense it certainly does," returned the
Critic, "because it destroys the keenness of the
senses. I regard the training of the craftsman's
hand as a matter of the greatest moment. He
must have the most subtle sense of touch if he is
ever to justify himself fully as an artist, and this
sense quickly becomes atrophied if it is not most
carefully cultivated. No man can cultivate it or
even keep it properly active if he is using
mechanical devices, time-saving appliances, and so
on, more than half his time. Machinery is one of
the products of civilisation, so civilisation can be
blamed for putting the temptation in his way ; but
it is his fault if he yields to it."