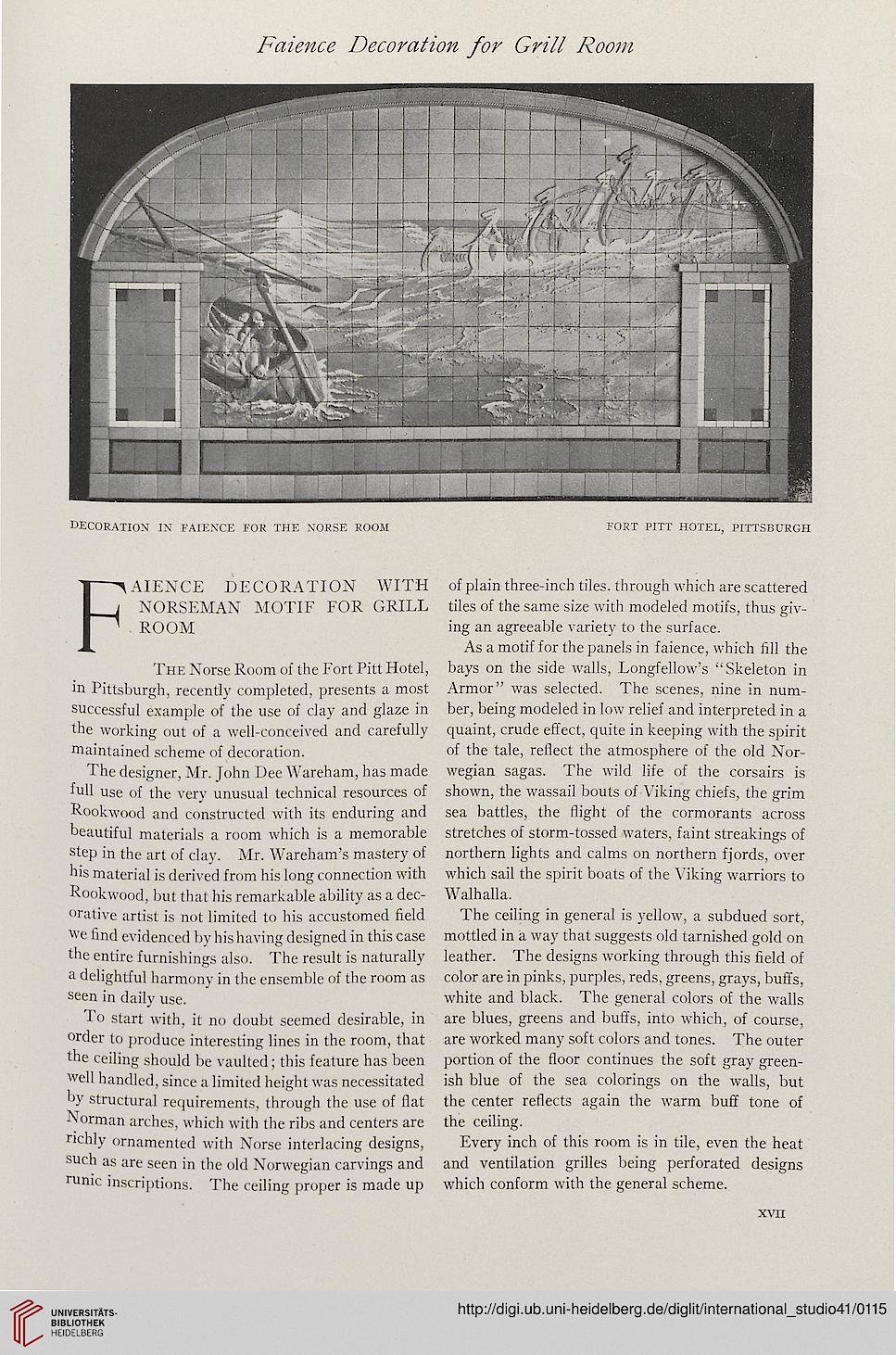 The Norse Room of the Fort Pitt Hotel,
in Pittsburgh, recently completed, presents a most
successful example of the use of clay and glaze in
the working out of a well-conceived and carefully
maintained scheme of decoration.

The designer, Mr. John Dee Wareham, has made
full use of the very unusual technical resources of
Rookwood and constructed with its enduring and
beautiful materials a room which is a memorable
step in the art of clay. Mr. Wareham's mastery of
his material is derived from his long connection with
Rookwood, but that his remarkable ability as a dec-
orative artist is not limited to his accustomed field
We find evidenced by his having designed in this case
the entire furnishings also. The result is naturally
a delightful harmony in the ensemble of the room as
seen in daily use.

To start with, it no doubt seemed desirable, in
order to produce interesting lines in the room, that
the ceiling should be vaulted; this feature has been
well handled, since a limited height was necessitated
by structural requirements, through the use of flat
Norman arches, which with the ribs and centers are
richly ornamented with Norse interlacing designs,
such as are seen in the old Norwegian carvings and
runic inscriptions. The ceiling proper is made up

of plain three-inch tiles, through which are scattered
tiles of the same size with modeled motifs, thus giv-
ing an agreeable variety to the surface.

As a motif for the panels in faience, which fill the
bays on the side walls, Longfellow's "Skeleton in
Armor" was selected. The scenes, nine in num-
ber, being modeled in low relief and interpreted in a
quaint, crude effect, quite in keeping with the spirit
of the tale, reflect the atmosphere of the old Nor-
wegian sagas. The wild life of the corsairs is
shown, the wassail bouts of Viking chiefs, the grim
sea battles, the flight of the cormorants across
stretches of storm-tossed waters, faint streakings of
northern lights and calms on northern fjords, over
which sail the spirit boats of the Viking warriors to
Walhalla.

The ceiling in general is yellow, a subdued sort,
mottled in a way that suggests old tarnished gold on
leather. The designs working through this field of
color are in pinks, purples, reds, greens, grays, buffs,
white and black. The general colors of the walls
are blues, greens and buffs, into which, of course,
are worked many soft colors and tones. The outer
portion of the floor continues the soft gray green-
ish blue of the sea colorings on the walls, but
the center reflects again the warm buff tone of
the ceiling.

Every inch of this room is in tile, even the heat
and ventilation grilles being perforated designs
which conform with the general scheme.