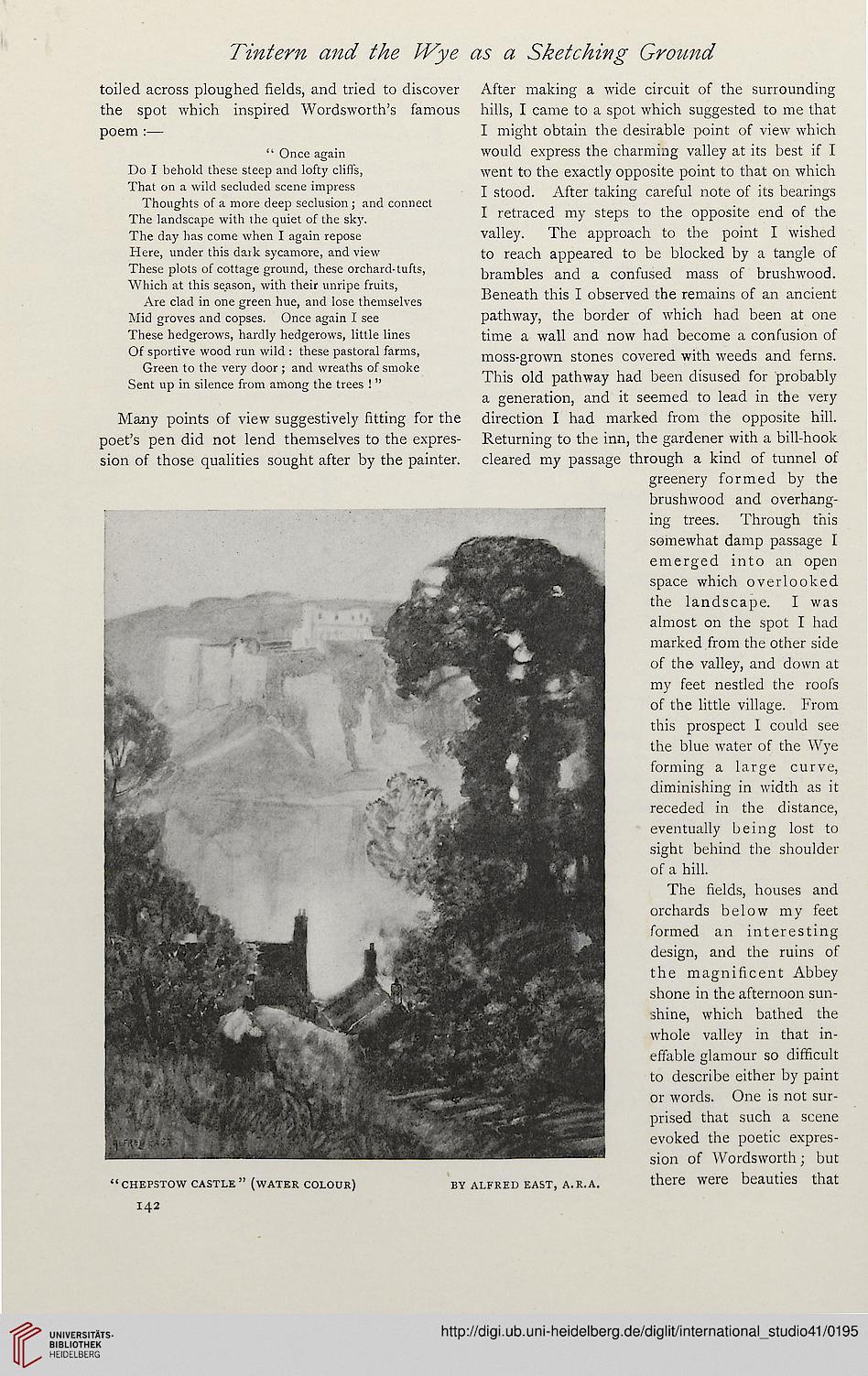 toiled across ploughed fields, and tried to discover After making a wide circuit of the surrounding

the spot which inspired Wordsworth's famous hills, I came to a spot which suggested to me that

poem :— I might obtain the desirable point of view which

Do I behold these steep and lofty cliffs, went to the exactly opposite point to that on which

The landscape with the quiet of the sky. 1 retraced my steps to the opposite end of the

The day has come when I again repose valley. The approach to the point I wished

Here, under this dark sycamore, and view to reach appeared to be blocked by a tangle of

These plots of cottage ground, these orchard-tufts, brambles and a confused mass of brushwood.

Are clad in one green hue, and lose themselves Beneath this I observed the remains of an ancient

Mid groves and copses. Once again I see pathway, the border of which had been at one

These hedgerows, hardly hedgerows, little lines time a wall and now had become a confusion of

Sent up in silence from among the trees ! " Thls old Pathway had been disused for probably

a generation, and it seemed to lead in the very
Many points of view suggestively fitting for the direction I had marked from the opposite hill,
poet's pen did not lend themselves to the expres- Returning to the inn, the gardener with a bill-hook
sion of those qualities sought after by the painter. cleared my passage through a kind of tunnel of

greenery formed by the
brushwood and overhang-
ing trees. Through this
somewhat damp passage I
emerged into an open
space which overlooked
the landscape. I was
almost on the spot I had
marked from the other side
of the valley, and down at
my feet nestled the roofs
of the little village. From
this prospect 1 could see
the blue water of the Wye
forming a large curve,
diminishing in width as it
receded in the distance,
eventually being lost to
sight behind the shoulder
of a hill.

The fields, houses and
orchards below my feet
formed an interesting
design, and the ruins of
the magnificent Abbey
shone in the afternoon sun-
shine, which bathed the
whole valley in that in-
effable glamour so difficult
to describe either by paint
or words. One is not sur-
prised that such a scene
evoked the poetic expres-
sion of Wordsworth; but
"chepstow castle" (water colour) by alfreij east, a.r.a. there were beauties that