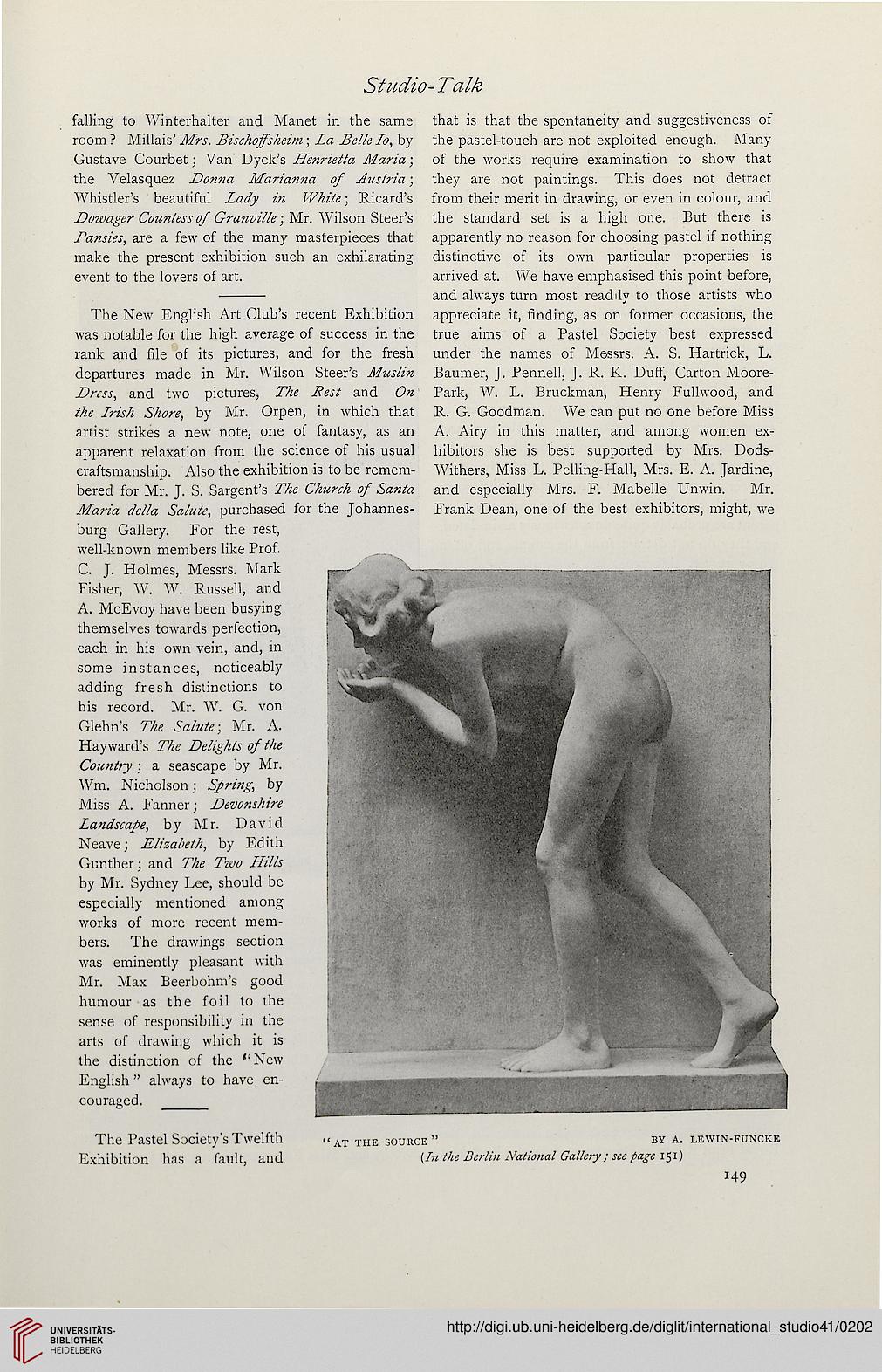 falling to Winterhalter and Manet in the same that is that the spontaneity and suggestiveness of
room? Millais' Mrs. Bischoffshei/n; La Belle7b, by the pastel-touch are not exploited enough. Many
Gustave Courbet; Van Dyck's Henrietta Maria; of the works require examination to show that
the Velasquez Donna Marianna of Austria; they are not paintings. This does not detract
Whistler's beautiful Lady in White; Ricard's from their merit in drawing, or even in colour, and
Doivager Countess of Granville; Mr. Wilson Steer's the standard set is a high one. But there is
Bansies, are a few of the many masterpieces that apparently no reason for choosing pastel if nothing
make the present exhibition such an exhilarating distinctive of its own particular properties is
event to the lovers of art. arrived at. We have emphasised this point before,

- and always turn most readily to those artists who

The New English Art Club's recent Exhibition appreciate it, finding, as on former occasions, the
was notable for the high average of success in the true aims of a Pastel Society best expressed
rank and file of its pictures, and for the fresh under the names of Messrs. A. S. Hartrick, L.
departures made in Mr. Wilson Steer's Muslin Baumer, J. Pennell, J. R. K. Duff, Carton Moore-
Dress, and two pictures, The Best and On Park, W. L. Bruckman, Henry Fullwood, and
the Lrish Shore, by Mr. Orpen, in which that R. G. Goodman. We can put no one before Miss
artist strikes a new note, one of fantasy, as an A. Airy in this matter, and among women ex-
apparent relaxation from the science of his usual hibitors she is best supported by Mrs. Dods-
craftsmanship. Also the exhibition is to be remem- Withers, Miss L. Pelling-Hall, Mrs. E. A. Jardine,
bered for Mr. J. S. Sargent's The Church of Santa and especially Mrs. F. Mabelle Unwin. Mr.
Maria delta Salute, purchased for the Johannes- Frank Dean, one of the best exhibitors, might, we
burg Gallery. For the rest,
well-known members like Prof.
C. J. Holmes, Messrs. Mark
Fisher, W. W. Russell, and
A. McEvoy have been busying
themselves towards perfection,
each in his own vein, and, in
some instances, noticeably
adding fresh distinctions to
his record. Mr. W. G. von
Glehn's The Salute; Mr. A.
Hay ward's The Delights of the
Country ; a seascape by Mr.
Wm. Nicholson; Spring, by
Miss A. Fanner; Devonshire
Landscape, by Mr. David
Neave; Elizabeth, by Edith
Gunther; and The Two Hills
by Mr. Sydney Lee, should be
especially mentioned among
works of more recent mem-
bers. The drawings section
was eminently pleasant with
Mr. Max Beerbohm's good
humour as the foil to the
sense of responsibility in the
arts of drawing which it is
the distinction of the "New
English" always to have en-
couraged. _

The Pastel Society's Twelfth .<at the source" by a. lewin-funcke

Exhibition has a fault, and {In the Berlin National Gallery; see page 151)