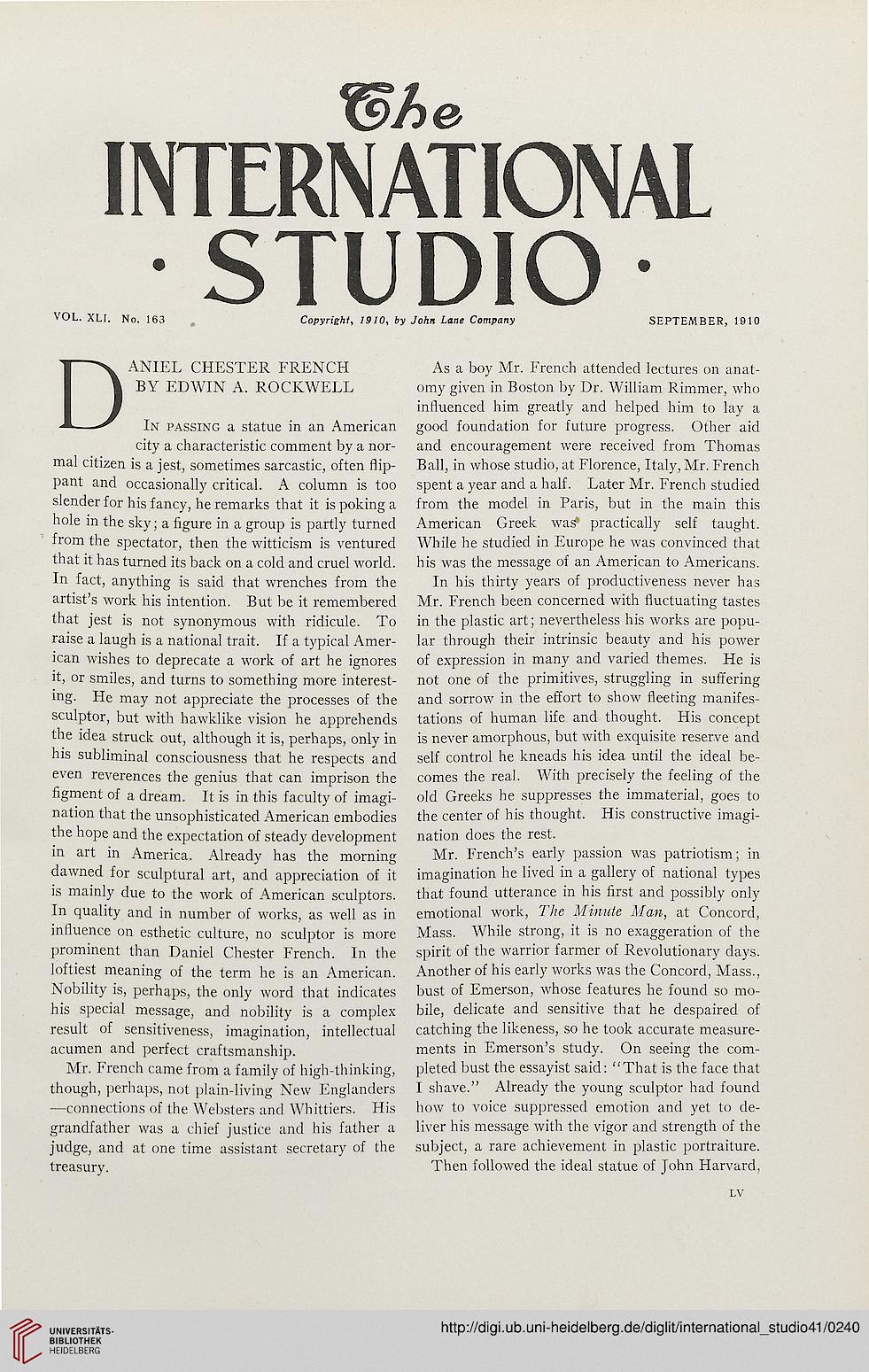 DANIEL CHESTER FRENCH As a boy Mr. French attended lectures on anat-
BY EDWIN A. ROCKWELL omy given in Boston by Dr. William Rimmer, who
influenced him greatly and helped him to lay a
In passing a statue in an American good foundation for future progress. Other aid
city a characteristic comment by a nor- and encouragement were received from Thomas
mal citizen is a jest, sometimes sarcastic, often flip- Ball, in whose studio, at Florence, Italy, Mr. French
pant and occasionally critical. A column is too spent a year and a half. Later Mr. French studied
slender for his fancy, he remarks that it is poking a from the model in Paris, but in the main this
hole in the sky; a figure in a group is partly turned American Greek was* practically self taught,
from the spectator, then the witticism is ventured While he studied in Europe he was convinced that
that it has turned its back on a cold and cruel world, his was the message of an American to Americans.
In fact, anything is said that wrenches from the In his thirty years of productiveness never has
artist's work his intention. But be it remembered Mr. French been concerned with fluctuating tastes
that jest is not synonymous with ridicule. To in the plastic art; nevertheless his works are popu-
raise a laugh is a national trait. If a typical Amer- lar through their intrinsic beauty and his power
ican wishes to deprecate a work of art he ignores of expression in many and varied themes. He is
it, or smiles, and turns to something more interest- not one of the primitives, struggling in suffering
ing. He may not appreciate the processes of the and sorrow in the effort to show fleeting manifes-
sculptor, but with hawklike vision he apprehends tations of human life and thought. His concept
the idea struck out, although it is, perhaps, only in is never amorphous, but with exquisite reserve and
his subliminal consciousness that he respects and self control he kneads his idea until the ideal be-
even reverences the genius that can imprison the comes the real. With precisely the feeling of the
figment of a dream. It is in this faculty of imagi- old Greeks he suppresses the immaterial, goes to
nation that the unsophisticated American embodies the center of his thought. His constructive imagi-
the hope and the expectation of steady development nation does the rest.

in art in America. Already has the morning Mr. French's early passion was patriotism ; in
dawned for sculptural art, and appreciation of it imagination he lived in a gallery of national types
is mainly due to the work of American sculptors, that found utterance in his first and possibly only
In quality and in number of works, as well as in emotional work, The Minute Man, at Concord,
influence on esthetic culture, no sculptor is more Mass. While strong, it is no exaggeration of the
prominent than Daniel Chester French. In the spirit of the warrior farmer of Revolutionary days,
loftiest meaning of the term he is an American. Another of his early works was the Concord, Mass.,
Nobility is, perhaps, the only word that indicates bust of Emerson, whose features he found so mo-
llis special message, and nobility is a complex bile, delicate and sensitive that he despaired of
result of sensitiveness, imagination, intellectual catching the likeness, so he took accurate measure-
acumen and perfect craftsmanship. ments in Emerson's study. On seeing the corn-
Mr. French came from a family of high-thinking, pleted bust the essayist said: "That is the face that
though, perhaps, not plain-living New Englanders I shave." Already the young sculptor had found
—connections of the Websters and Whittiers. His how to voice suppressed emotion and yet to de-
grandfather was a chief justice and his father a liver his message with the vigor and strength of the
judge, and at one time assistant secretary of the subject, a rare achievement in plastic portraiture,
treasury. Then followed the ideal statue of John Harvard>