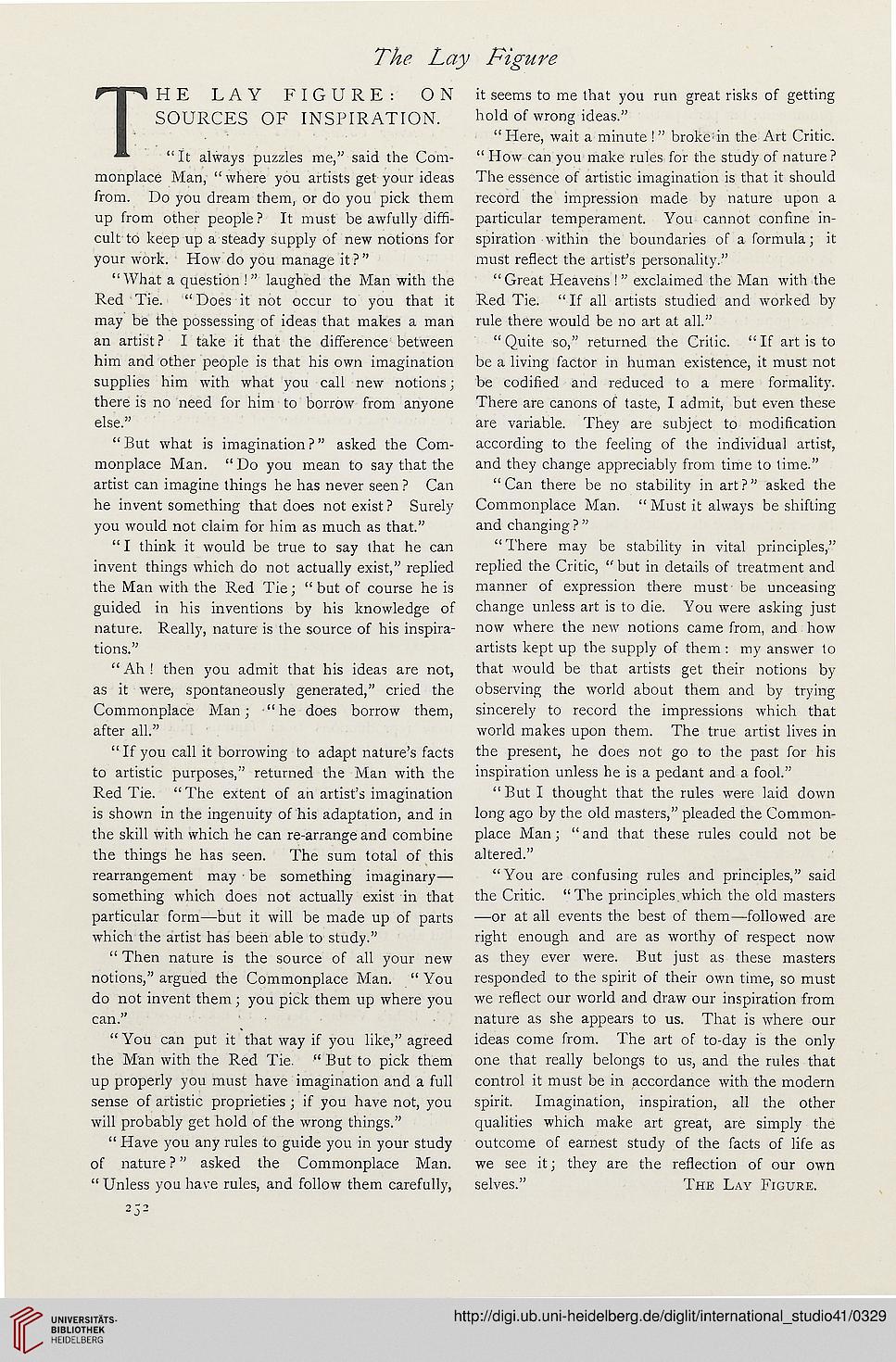 THE LAY FIGURE: ON
SOURCES OF INSPIRATION.
" It always puzzles me," said the Com-
monplace Man, " where you artists get your ideas
from. Do you dream them, or do you pick them
up from other people ? It must be awfully diffi-
cult to keep up a steady supply of new notions for
your work. How do you manage it ? "

"What a question ! " laughed the Man with the
Red Tie. " Does it not occur to you that it
may be the possessing of ideas that makes a man
an artist? I take it that the difference between
him and other people is that his own imagination
supplies him with what you call new notions;
there is no need for him to borrow from anyone
else."

" But what is imagination ?" asked the Com-
monplace Man. "Do you mean to say that the
artist can imagine things he has never seen ? Can
he invent something that does not exist ? Surely
you would not claim for him as much as that."

" I think it would be true to say that he can
invent things which do not actually exist," replied
the Man with the Red Tie; " but of course he is
guided in his inventions by his knowledge of
nature. Really, nature is the source of his inspira-
tions."

" Ah ! then you admit that his ideas are not,
as it were, spontaneously generated," cried the
Commonplace Man; "he does borrow them,
after all."

" If you call it borrowing to adapt nature's facts
to artistic purposes," returned the Man with the
Red Tie. "The extent of an artist's imagination
is shown in the ingenuity of his adaptation, and in
the skill with which he can re-arrange and combine
the things he has seen. The sum total of this
rearrangement may be something imaginary—■
something which does not actually exist in that
particular form—but it will be made up of parts
which the artist has been able to study."

" Then nature is the source of all your new
notions," argued the Commonplace Man. " You
do not invent them ; you pick them up where you
can."

" You can put it that way if you like," agreed
the Man with the Red Tie. " But to pick them
up properly you must have imagination and a full
sense of artistic proprieties ; if you have not, you
will probably get hold of the wrong things."

" Have you any rules to guide you in your study
of nature ?" asked the Commonplace Man.
"Unless you have rules, and follow them carefully,

it seems to me that you run great risks of getting
hold of wrong ideas."

" Here, wait a minute !" broke;in the Art Critic.
" How can you make rules for the study of nature ?
The essence of artistic imagination is that it should
record the impression made by nature upon a
particular temperament. You cannot confine in-
spiration within the boundaries of a formula; it
must reflect the artist's personality."

"Great Heavens !" exclaimed the Man with the
Red Tie. "If all artists studied and worked by
rule there would be no art at all."

"Quite so," returned the Critic. "If art is to
be a living factor in human existence, it must not
be codified and reduced to a mere formality.
There are canons of taste, I admit, but even these
are variable. They are subject to modification
according to the feeling of the individual artist,
and they change appreciably from time to time."

"Can there be no stability in art?" asked the
Commonplace Man. " Must it always be shifting
and changing ? "

" There may be stability in vital principles,"
replied the Critic, " but in details of treatment and
manner of expression there must be unceasing
change unless art is to die. You were asking just
now where the new notions came from, and how
artists kept up the supply of them : my answer to
that would be that artists get their notions by
observing the world about them and by trying
sincerely to record the impressions which that
world makes upon them. The true artist lives in
the present, he does not go to the past for his
inspiration unless he is a pedant and a fool."

" But I thought that the rules were laid down
long ago by the old masters," pleaded the Common-
place Man; "and that these rules could not be
altered."

"You are confusing rules and principles," said
the Critic. " The principles which the old masters
—or at all events the best of them—followed are
right enough and are as worthy of respect now
as they ever were. But just as these masters
responded to the spirit of their own time, so must
we reflect our world and draw our inspiration from
nature as she appears to us. That is where our
ideas come from. The art of to-day is the only
one that really belongs to us, and the rules that
control it must be in accordance with the modern
spirit. Imagination, inspiration, all the other
qualities which make art great, are simply the
outcome of earnest study of the facts of life as
we see it; they are the reflection of our own
selves." The Lay Figure.