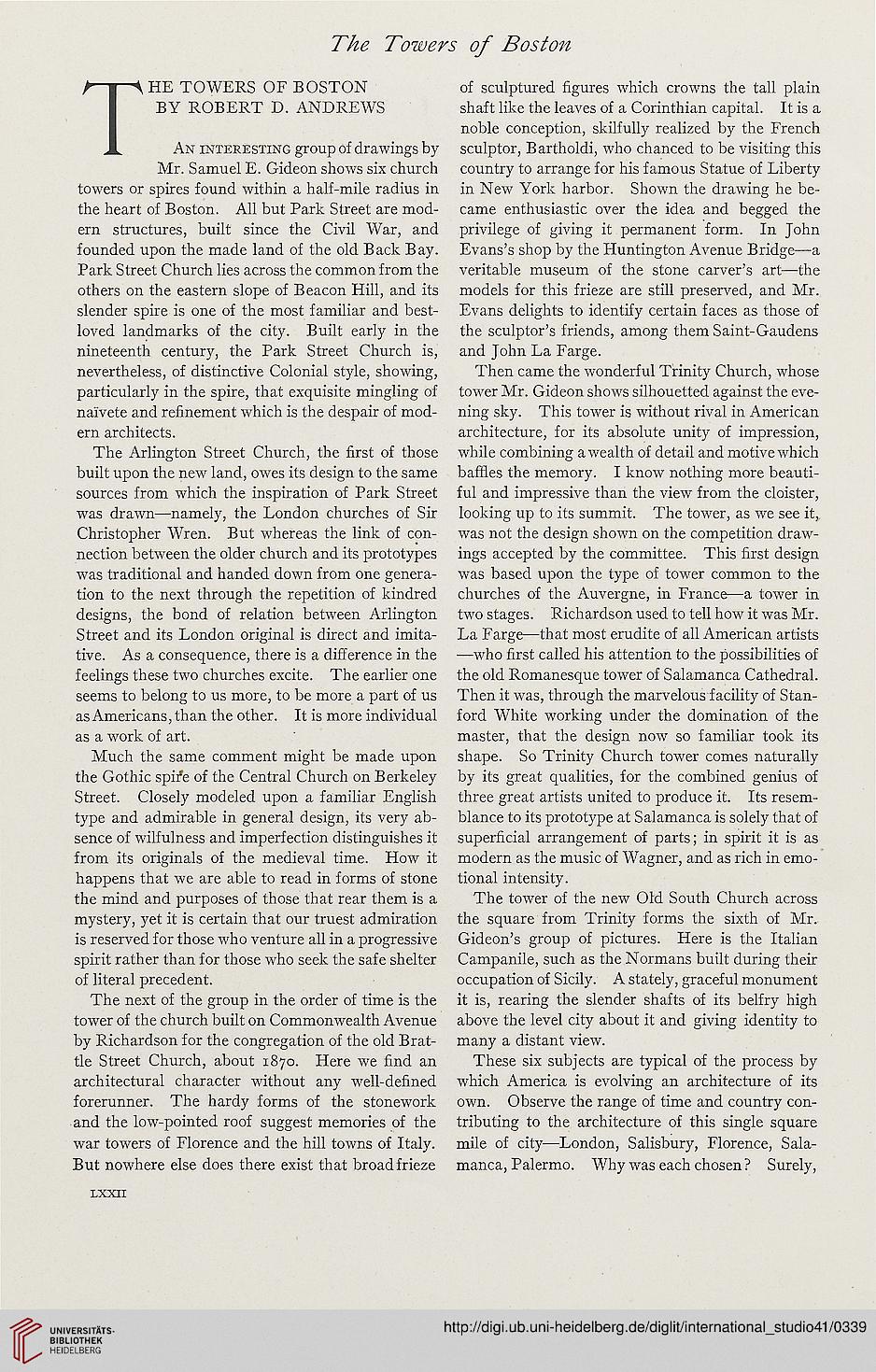 Information about OCR text
The Towers of Boston

BY ROBERT D. ANDREWS shaft like the leaves of a Corinthian capital. It is a
noble conception, skilfully realized by the French

An interesting group of drawings by sculptor, Bartholdi, who chanced to be visiting this

towers or spires found within a half-mile radius in in New York harbor. Shown the drawing he be-

the heart of Boston. All but Park Street are mod- came enthusiastic over the idea and begged the

ern structures, built since the Civil War, and privilege of giving it permanent form. In John

founded upon the made land of the old Back Bay. Evans's shop by the Huntington Avenue Bridge—a

others on the eastern slope of Beacon Hill, and its models for this frieze are still preserved, and Mr.

loved landmarks of the city. Built early in the the sculptor's friends, among them Saint-Gaudens

nevertheless, of distinctive Colonial style, showing, Then came the wonderful Trinity Church, whose
particularly in the spire, that exquisite mingling of tower Mr. Gideon shows silhouetted against the eve-
naivete and refinement which is the despair of mod- ning sky. This tower is without rival in American
ern architects. architecture, for its absolute unity of impression,

The Arlington Street Church, the first of those while combining a wealth of detail and motive which

built upon the new land, owes its design to the same baffles the memory. I know nothing more beauti-

sources from which the inspiration of Park Street ful and impressive than the view from the cloister,

was drawn—namely, the London churches of Sir looking up to its summit. The tower, as we see it,

Christopher Wren. But whereas the link of con- was not the design shown on the competition draw-

nection between the older church and its prototypes ings accepted by the committee. This first design

tion to the next through the repetition of kindred churches of the Auvergne, in France—a tower in

designs, the bond of relation between Arlington two stages. Richardson used to tell how it was Mr.

tive. As a consequence, there is a difference in the —who first called his attention to the possibilities of

feelings these two churches excite. The earlier one the old Romanesque tower of Salamanca Cathedral,

seems to belong to us more, to be more a part of us Then it was, through the marvelous facility of Stan-

as Americans, than the other. It is more individual ford White working under the domination of the

as a work of art. master, that the design now so familiar took its

the Gothic spire of the Central Church on Berkeley by its great qualities, for the combined genius of

Street. Closely modeled upon a familiar English three great artists united to produce it. Its resem-

type and admirable in general design, its very ab- blance to its prototype at Salamanca is solely that of

sence of wilfulness and imperfection distinguishes it superficial arrangement of parts; in spirit it is as

from its originals of the medieval time. How it modern as the music of Wagner, and as rich in emo-

happens that we are able to read in forms of stone tional intensity.

mystery, yet it is certain that our truest admiration the square from Trinity forms the sixth of Mr.

is reserved for those who venture all in a progressive Gideon's group of pictures. Here is the Italian

spirit rather than for those who seek the safe shelter Campanile, such as the Normans built during their

of literal precedent. occupation of Sicily. A stately, graceful monument

The next of the group in the order of time is the it is, rearing the slender shafts of its belfry high

by Richardson for the congregation of the old Brat- many a distant view.

tie Street Church, about 1870. Here we find an These six subjects are typical of the process by

forerunner. The hardy forms of the stonework own. Observe the range of time and country con-

war towers of Florence and the hill towns of Italy, mile of city—London, Salisbury, Florence, Sala-

But nowhere else does there exist that broad frieze manca, Palermo. Why was each chosen ? Surely,