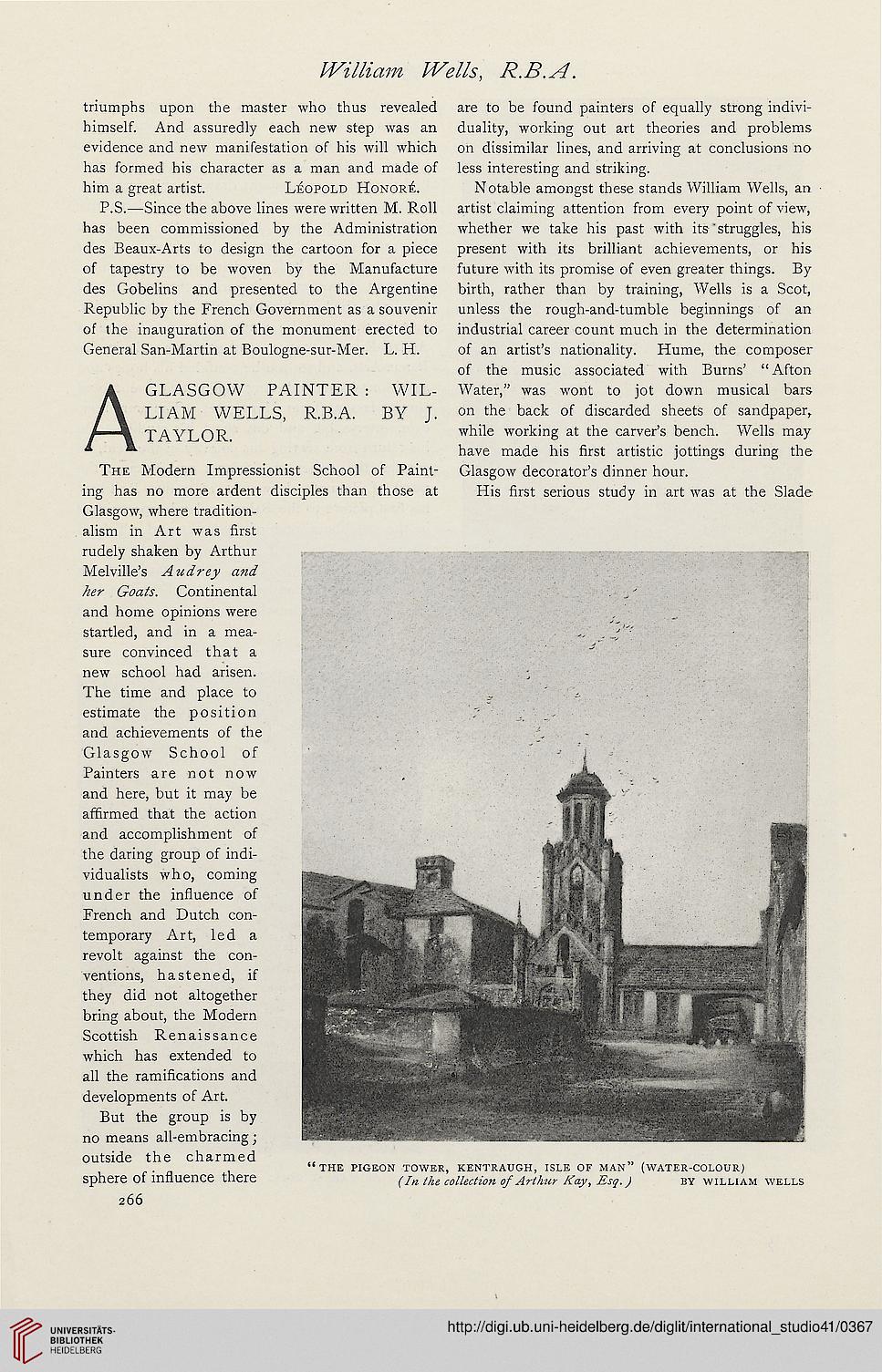 triumphs upon the master who thus revealed are to be found painters of equally strong indivi-
himself. And assuredly each new step was an duality, working out art theories and problems
evidence and new manifestation of his will which on dissimilar lines, and arriving at conclusions no
has formed his character as a man and made of less interesting and striking.

him a great artist. Leopold Honore. Notable amongst these stands William Wells, an

P.S.—Since the above lines were written M. Roll artist claiming attention from every point of view,
has been commissioned by the Administration whether we take his past with its' struggles, his
des Beaux-Arts to design the cartoon for a piece present with its brilliant achievements, or his
of tapestry to be woven by the Manufacture future with its promise of even greater things. By
des Gobelins and presented to the Argentine birth, rather than by training, Wells is a Scot,
Republic by the French Government as a souvenir unless the rough-and-tumble beginnings of an
of the inauguration of the monument erected to industrial career count much in the determination
General San-Martin at Boulogne-sur-Mer. L. H. of an artist's nationality. Hume, the composer

of the music associated with Burns' "Afton

AGLASGOW PAINTER : WIL- Water," was wont to jot down musical bars
LI AM WELLS, R.B.A. BY J. on tne back of discarded sheets of sandpaper,
TAYLOR while working at the carver's bench. Wells may

have made his first artistic jottings during the
The Modern Impressionist School of Paint- Glasgow decorator's dinner hour,
ing has no more ardent disciples than those at His first serious study in art was at the Slade
Glasgow, where tradition-
alism in Art was first
rudely shaken by Arthur
Melville's Audrey and
her Goats. Continental
and home opinions were
startled, and in a mea-
sure convinced that a
new school had arisen.
The time and place to
estimate the position
and achievements of the
Glasgow School of
Painters are not now
and here, but it may be
affirmed that the action
and accomplishment of
the daring group of indi-
vidualists who, coming
under the influence of
French and Dutch con-
temporary Art, led a
revolt against the con-
ventions, hastened, if
they did not altogether
bring about, the Modern
Scottish Renaissance
which has extended to
all the ramifications and
developments of Art.

But the group is by
no means all-embracing;
outside the charmed