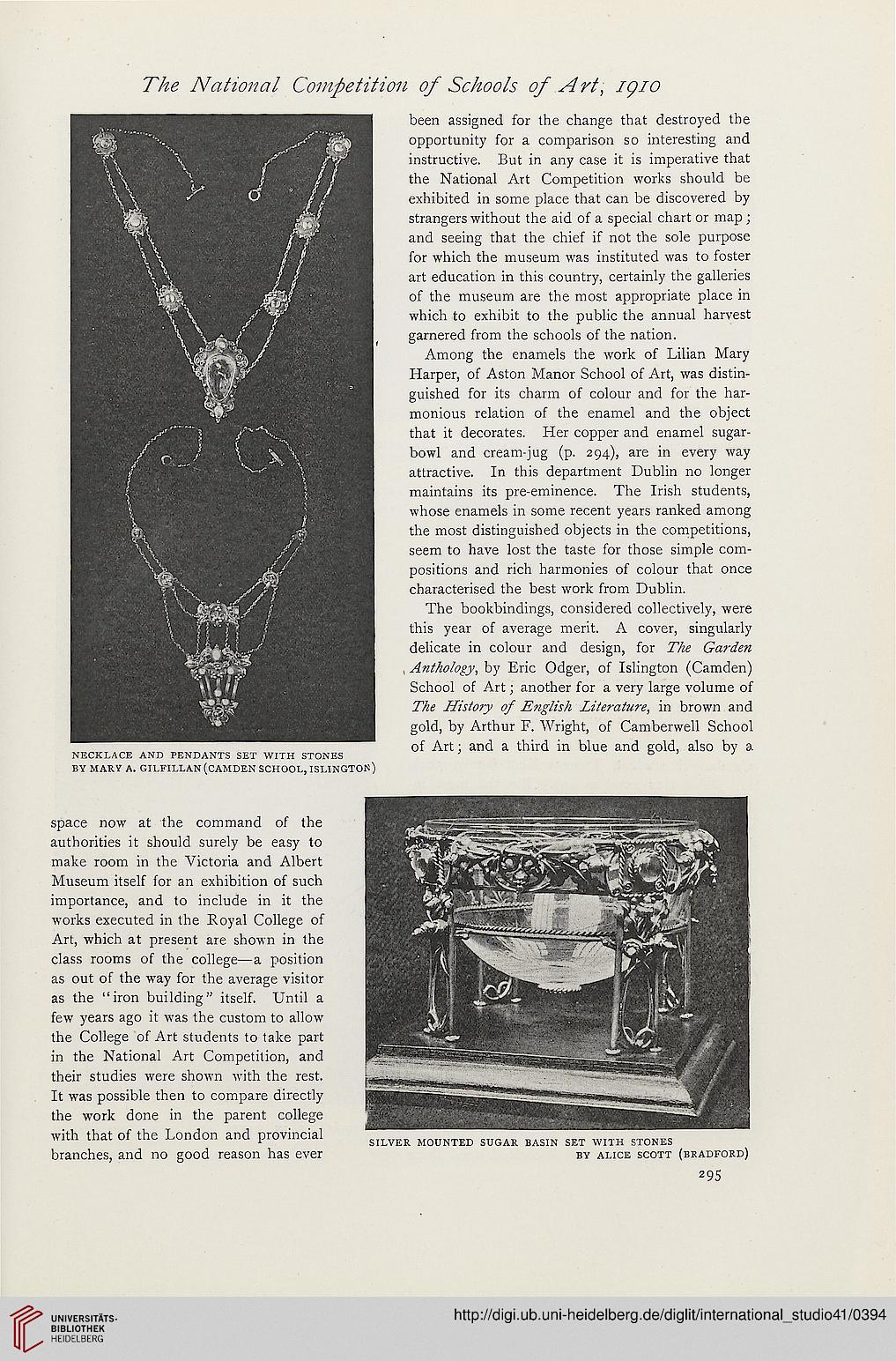 Information about OCR text
The National Competition of Schools of A rt, igio

necklace and pendants set with stones

space now at the command of the
authorities it should surely be easy to
make room in the Victoria and Albert
Museum itself for an exhibition of such
importance, and to include in it the
works executed in the Royal College of
Art, which at present are shown in the
class rooms of the college—a position
as out of the way for the average visitor
as the "iron building" itself. Until a
few years ago it was the custom to allow
the College of Art students to take part
in the National Art Competition, and
their studies were shown with the rest.
It was possible then to compare directly
the work done in the parent college
with that of the London and provincial

been assigned for the change that destroyed the
opportunity for a comparison so interesting and
instructive. But in any case it is imperative that
the National Art Competition works should be
exhibited in some place that can be discovered by
strangers without the aid of a special chart or map ;
and seeing that the chief if not the sole purpose
for which the museum was instituted was to foster
art education in this country, certainly the galleries
of the museum are the most appropriate place in
which to exhibit to the public the annual harvest
garnered from the schools of the nation.

Among the enamels the work of Lilian Mary
Harper, of Aston Manor School of Art, was distin-
guished for its charm of colour and for the har-
monious relation of the enamel and the object
that it decorates. Her copper and enamel sugar-
bowl and cream-jug (p. 294), are in every way
attractive. In this department Dublin no longer
maintains its pre-eminence. The Irish students,
whose enamels in some recent years ranked among
the most distinguished objects in the competitions,
seem to have lost the taste for those simple com-
positions and rich harmonies of colour that once
characterised the best work from Dublin.

The bookbindings, considered collectively, were
this year of average merit. A cover, singularly
delicate in colour and design, for The Garden
, Anthology, by Eric Odger, of Islington (Camden)
School of Art; another for a very large volume of
The History of English Literature, in brown and
gold, by Arthur F. Wright, of Camberwell School
of Art; and a third in blue and gold, also by a

branches, and no good reason has ever by alice scott (Bradford)