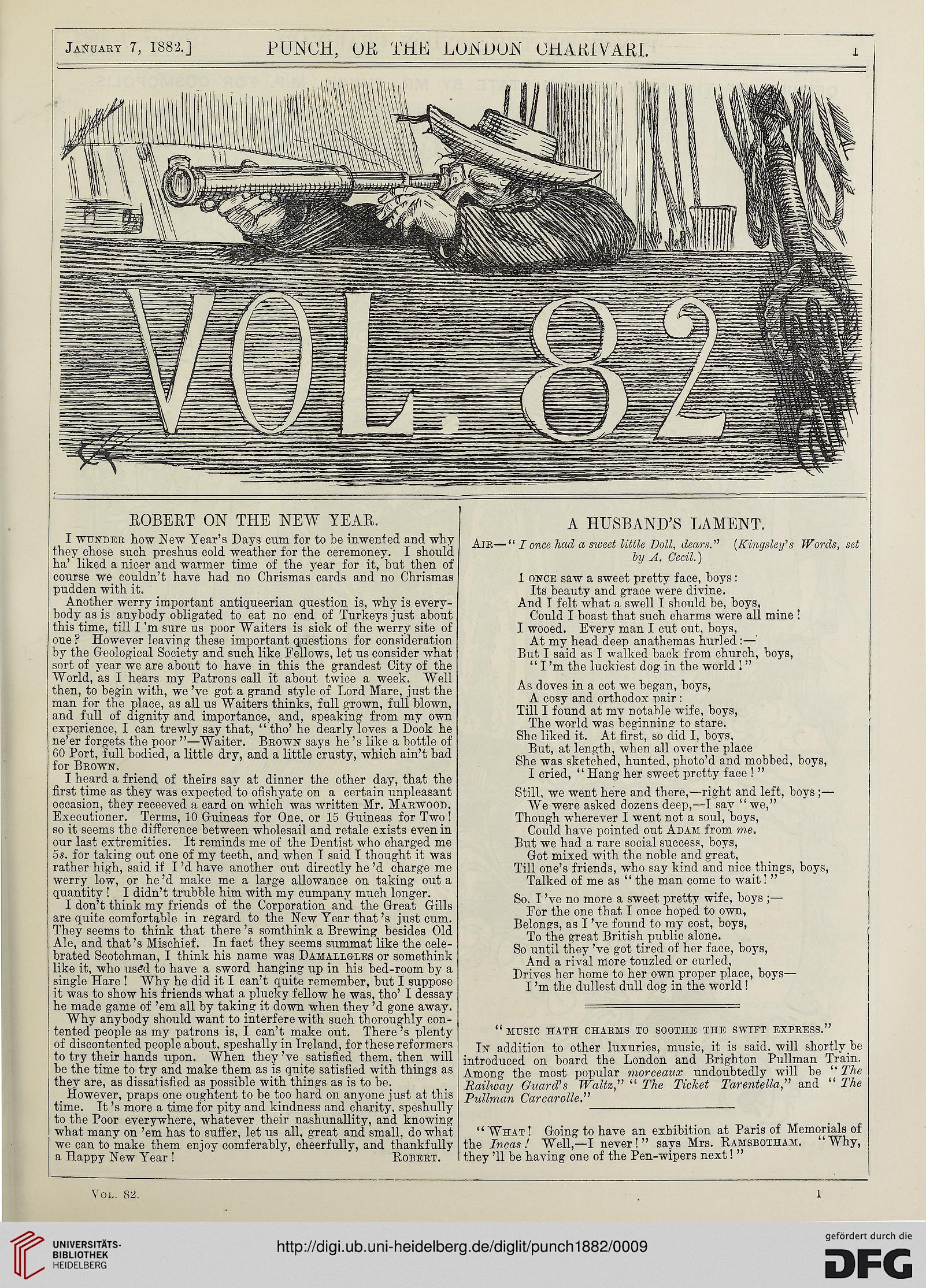 I wtjnder how New Year’s Days curn for to be inwented and why
they chose snch preshns cold weather for the ceremoney. I shonld
ha’ liked a nicer and warmer time of the year for it, hut then of
conrse we couldn’t have had no Chrismas cards and no Chrismas
pndden with it.

Another werry important antiqueerian qnestion is, why is every-
body as is anybody obligated to eat no end of Tnrkeys jnst abont
this time, till I ’m sure ns poor Waiters is sick of the werrv site of
one ? However leaving these important questions for consideration
by the Greological Society and snch like Fellows, let us consider what
sort of year we are about to have in this the grandest City of the
World, as I hears my Patrons call it abont twice a week. Well
then, to begin with, we ’ve got a grand style of Lord Mare, jnst the
man for the place, as all us Waiters thinks, full grown, full blown,
and full of dignity and importance, and, speaking from my own
experience, I can trewly say that, “ tho’ he dearly loves a Dook he
ne’er forgets the poor ”—Waiter. Brown says he ’s like a bottle of
60 Port, full bodied, a little dry, and a little crusty, which ain’t bad
for Brown.

I heard a friend of theirs say at dinner the other day, that the
first time as they was expected to ofishyate on a certain unpleasant
occasion, they receeved a card on which was written Mr. Marwood.
Executioner. Terms, 10 Gruineas for One, or 15 Guineas for Two!
so it seems the difference between wholesail and retale exists even in
our last extremities. It reminds me of the Dentist who charged me
5s. for taking out one of my teeth, and when I said I thought it was
rather high, said if I ’d have another out directly he ’d charge me
werry low, or he ’d make me a large allowance on taking out a
quantity ! I didn’t trubble him with my cumpany much longer.

I don’t think my friends of the Corporation and the Great Gills
are quite comfortable in regard to the Xew Year that ’s just cum.
They seems to think that there ’s somthink a Brewing besides Old
Ale, and that’s Mischief. In fact they seems summat like the cele-
brated Scotchman, I think his name was Damadlgles or somethink
like it, who us£d to have a sword hanging up in his bed-room by a
single Hare ! Why he did it I can’t quite remember, but I suppose
it was to show his friends what a plucky fellow he was, tho’ I dessay
he made game of ’em all by taking it down when they ’d gone away.

Why anybody should want to interfere with such thoroughly con-
tented people as my patrons is, I can’t make out. There ’s plenty
of discontented people about, speshally in Ireland, for these reformers
to try their hands upon. When they ’ve satisfied them, then will
be the time to try and make them as is qnite satisfied with things as
they are, as dissatisfied as possible with things as is to be.

However, praps one oughtent to be too hard on anyone just at this
time. It ’s more a time for pity and kindness and charity, speshully
to the Poor everywhere, whatever their nashunallity, and knowing
what many on ’em has to suffer, let us all, great and small, dowhat
we can to make them enjoy comferably, cheerfully, and thankfully
a Happy New Year ! Rodert.

Its beautv and grace were divine.

And I felt what a swell I should be, boys,

Could I boast that such charms were all mine !

I wooed. Every man I cut out, boys,

At my head deep anathemas hurled:—

But I said as I walked back from church, boys,

As doves in a cot we hegan, boys,

A cosy and orthodox pair :

Till I found at mv notahle wife, boys,

The world was beginning to stare.

But, at length, when all overthe place
She was sketohed, hunted, photo’d and mobbed, boys,
I cried, “ Hang her sweet pretty face ! ”

Still, we went here and there,—right and left, boys
We were asked dozens deep,—I sav “we,”

Though wherever I went not a soul, boys,

Could have pointed out Adam from me.

But we had a rare social success, boys,

Got mixed with the noble and great,

Till one’s friends, who say kind and nice things, boys,
Talked of me as “ the man come to wait! ”

For the one that I once hoped to own,

Belongs, as I ’ve found to my cost, boys,

To the great British public alone.

So until they ’ve got tired of her face, boys,

And a rival more touzled or curled,

Drives her home to her own proper place, boys—

I ’m the dullest dull dog in the world!

In addition to other luxuries, music, it is said. will shortly be
introduced on hoard the London and Brighton Puilman Train.
Among the most popular morceaux undoubtedly will be “ The
Railway Guard's Waltz,” “ The TicJcet Tarentella," and “ The
Pullman Carcarolle."

“What! Going to have an exhibition at Paris of Memorials of
the Incas ! Well,—I never!” says Mrs. Ramsbotham. “Why,
they ’ll be having one of the Pen-wipers next! ”