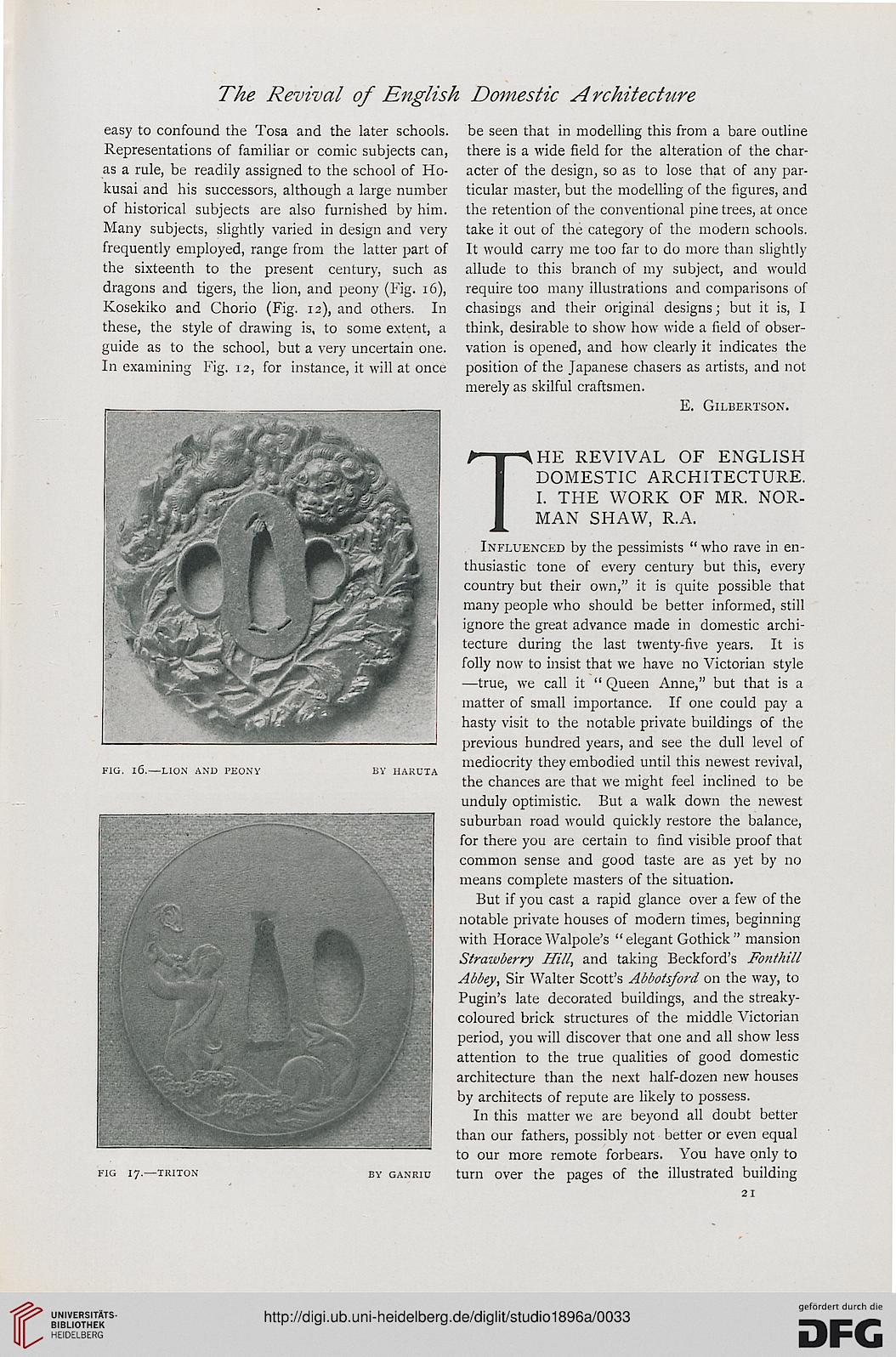 Information about OCR text
The Revival of English Domestic A rchitecture

easy to confound the Tosa and the later schools.
Representations of familiar or comic subjects can,
as a rule, be readily assigned to the school of Ho-
kusai and his successors, although a large number
of historical subjects are also furnished by him.
Many subjects, slightly varied in design and very
frequently employed, range from the latter part of
the sixteenth to the present century, such as
dragons and tigers, the lion, and peony (Fig. 16),
Kosekiko and Chorio (Fig. 12), and others. In
these, the style of drawing is, to some extent, a
guide as to the school, but a very uncertain one.
In examining Fig. 12, for instance, it will at once

be seen that in modelling this from a bare outline
there is a wide field for the alteration of the char-
acter of the design, so as to lose that of any par-
ticular master, but the modelling of the figures, and
the retention of the conventional pine trees, at once
take it out of the category of the modern schools.
It would carry me too far to do more than slightly
allude to this branch of my subject, and would
require too many illustrations and comparisons of
chasings and their original designs; but it is, I
think, desirable to show how wide a field of obser-
vation is opened, and how clearly it indicates the
position of the Japanese chasers as artists, and not
merely as skilful craftsmen.

HE REVIVAL OF ENGLISH
DOMESTIC ARCHITECTURE.
I. THE WORK OF MR. NOR-
MAN SHAW, R.A.

Influenced by the pessimists " who rave in en-
thusiastic tone of every century but this, every
country but their own," it is quite possible that
many people who should be better informed, still
ignore the great advance made in domestic archi-
tecture during the last twenty-five years. It is
folly now to insist that we have no Victorian style
—true, we call it " Queen Anne," but that is a
matter of small importance. If one could pay a
hasty visit to the notable private buildings of the
previous hundred years, and see the dull level of
mediocrity they embodied until this newest revival,
the chances are that we might feel inclined to be
unduly optimistic. But a walk down the newest
suburban road would quickly restore the balance,
for there you are certain to find visible proof that
common sense and good taste are as yet by no
means complete masters of the situation.

But if you cast a rapid glance over a few of the
notable private houses of modem times, beginning
with Horace Walpole's "elegant Gothick" mansion
Strawberry Hill, and taking Beckford's Fonthill
Abbey, Sir Walter Scott's Abbotsford on the way, to
Pugin's late decorated buildings, and the streaky-
coloured brick structures of the middle Victorian
period, you will discover that one and all show less
attention to the true qualities of good domestic
architecture than the next half-dozen new houses
by architects of repute are likely to possess.

In this matter we are beyond all doubt better
than our fathers, possibly not better or even equal
to our more remote forbears. You have only to
turn over the pages of the illustrated building