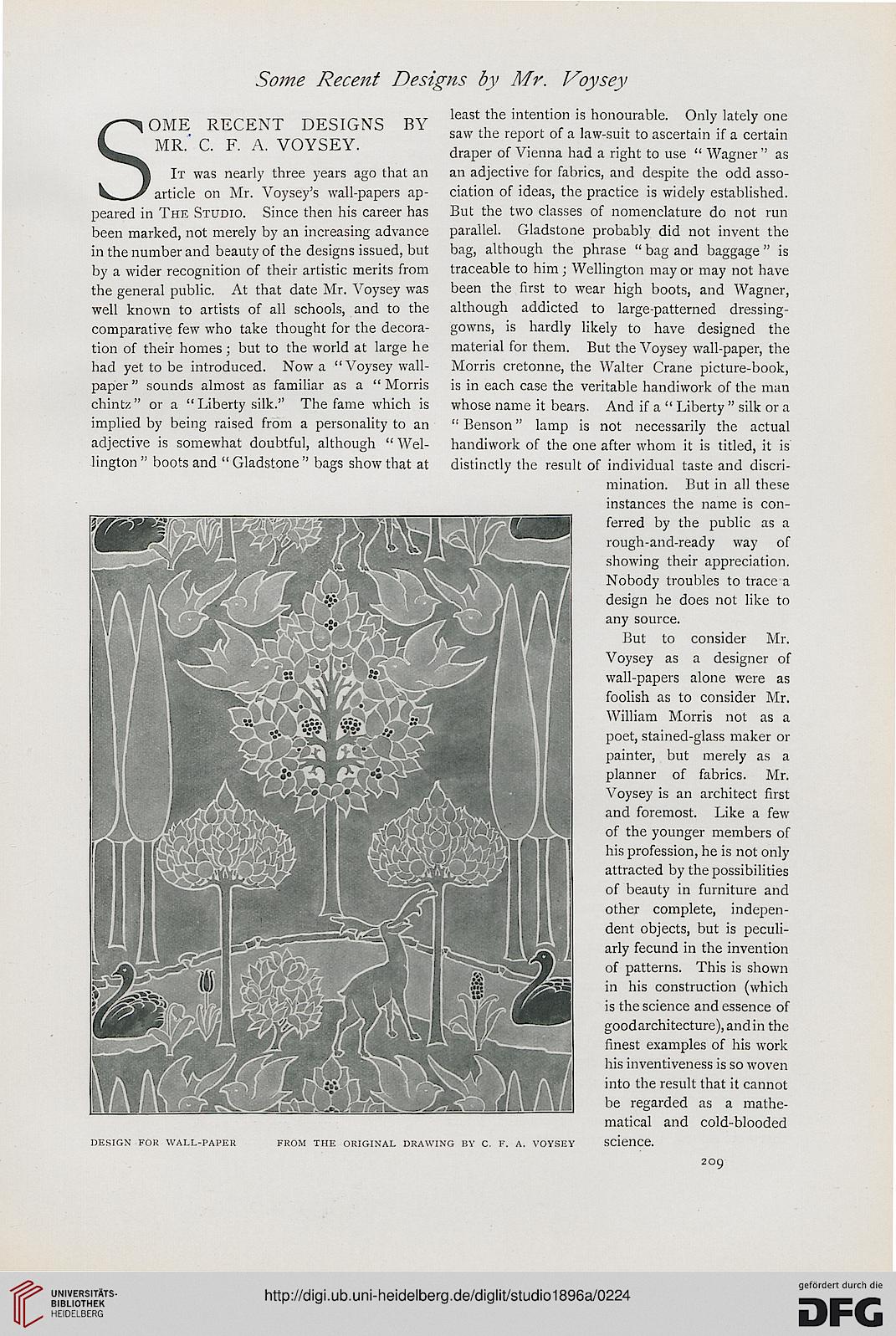 Information about OCR text
Some Recent Designs by Mr. Voysey

S„,TT, „„„„.T„ least the intention is honourable. Only lately one

| It was nearly three years ago that an an adjective for fabrics, and despite the odd asso-
article on Mr. Voysey's wall-papers ap- ciation of ideas, the practice is widely established,
peared in The Studio. Since then his career has But the two classes of nomenclature do not run
been marked, not merely by an increasing advance parallel. Gladstone probably did not invent the
in the number and beauty of the designs issued, but bag, although the phrase " bag and baggage " is
by a wider recognition of their artistic merits from traceable to him; Wellington may or may not have
the general public. At that date Mr. Voysey was been the first to wear high boots, and Wagner,
well known to artists of all schools, and to the although addicted to large-patterned dressing-
comparative few who take thought for the decora- gowns, is hardly likely to have designed the
tion of their homes ; but to the world at large he material for them. But the Voysey wall-paper, the
had yet to be introduced. Now a "Voysey wall- Morris cretonne, the Walter Crane picture-book,
paper " sounds almost as familiar as a " Morris is in each case the veritable handiwork of the man
chintz" or a " Liberty silk." The fame which is whose name it bears. And if a " Liberty " silk or a
implied by being raised from a personality to an " Benson" lamp is not necessarily the actual
adjective is somewhat doubtful, although " Wei- handiwork of the one after whom it is titled, it is
lington " boots and " Gladstone " bags show that at distinctly the result of individual taste and discri-
mination. But in all these
instances the name is con-
ferred by the public as a
rough-and-ready way of
showing their appreciation.
Nobody troubles to trace a
design he does not like to
any source.

But to consider Mr.
Voysey as a designer of
wall-papers alone were as
foolish as to consider Mr.
William Morris not as a
poet, stained-glass maker or
painter, but merely as a
planner of fabrics. Mr.
Voysey is an architect first
and foremost. Like a few
of the younger members of
his profession, he is not only
attracted by the possibilities
of beauty in furniture and
other complete, indepen-
dent objects, but is peculi-
arly fecund in the invention
of patterns. This is shown
in his construction (which
is the science and essence of
goodarchitecture), and in the
finest examples of his work
his inventiveness is so woven
into the result that it cannot
be regarded as a mathe-
matical and cold-blooded

DESIGN FOR WALL-PAPER FROM THE ORIGINAL DRAWING BY C. F. A. VOYSEY SCienCC