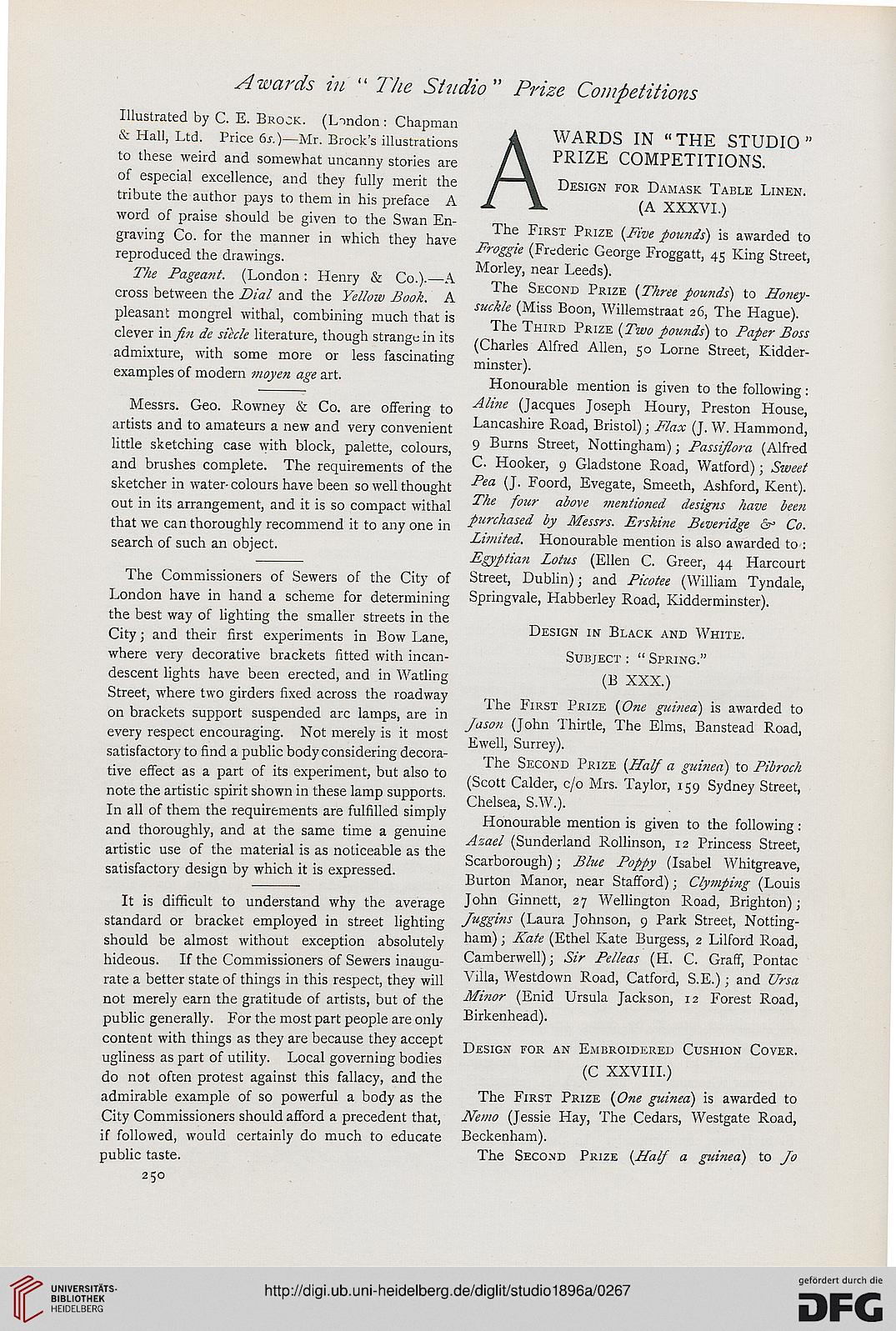 to these weird and somewhat uncanny stories are / \ PRIZE COMPETITIONS.

of especial excellence, and they fully merit the A—\ Design for Damask Table Linen.

tribute the author pays to them in his preface A x \. (A XXXVI)

word of praise should be given to the Swan En- ™ „

graving Co. for the manner in which they have /he. f'RSJ PRI*E » awarded to

pleasant mongrel withal, combining much that is „ ' s '

admixture, with some more or less fascinating minster)

1 __f Honourable mention is given to the following :

Messrs. Geo. Rowney & Co. are offering to AHne (Jacques Joseph Houry, Preston House,
artists and to amateurs a new and very convenient Lancashire Road, Bristol); Flax (J. W. Hammond,
little sketching case with block, palette, colours, 9 Burns Street> Nottingham); Passiflora (Alfred
and brushes complete. The requirements of the C Hooker, 9 Gladstone Road, Watford); Sweet
sketcher in water-colours have been so well thought Pea (J- Foord> Evegate, Smeeth, Ashford, Kent),
out in its arrangement, and it is so compact withal The four ahove mentioned designs have been
that we can thoroughly recommend it to any one in phased by Messrs. Erskine Beveridge cV Co.
search of such an object. Limited. Honourable mention is also awarded to :
_ Egyptian Lotus (Ellen C. Greer, 44 Harcourt

The Commissioners of Sewers of the City of Street, Dublin); and Picotee (William Tyndale,

London have in hand a scheme for determining Springvale, Habberley Road, Kidderminster).

the best way of lighting the smaller streets in the

City; and their first experiments in Bow Lane,

on brackets support suspended arc lamps, are in . .

every respect encouraging. Not merely is it most £ vj gurre )

^ . f Honourable mention is given to the following:

and thoroughly, and at the same time a genuine ^ (Sunderland Rollinsori) I2 Princess Street>

artistic use of the material is as noticeable as the ^ ^ whi

satisfactory des.gn by which it is expressed. Burton near Stafford). Clymping (Louis

It is difficult to understand why the average John Ginnett, 27 Wellington Road, Brighton);

rate a better state of things in this respect, they will Vllla> Westdown Road, Catford, S.E.); and Ursa

not merely earn the gratitude of artists, but of the Minor (Enid Ursula Jackson, 12 Forest Road,

public generally. For the most part people are only Birkenhead).

content with things as they are because they accept Design fqr ^ Embroidered Cushion Cover.

do not often protest against this fallacy, and the ' ''

if followed, would certainly do much to educate Beckenham).

public taste. The Second Prize (Half a guinea) to Jo
250

Design in Black and White.