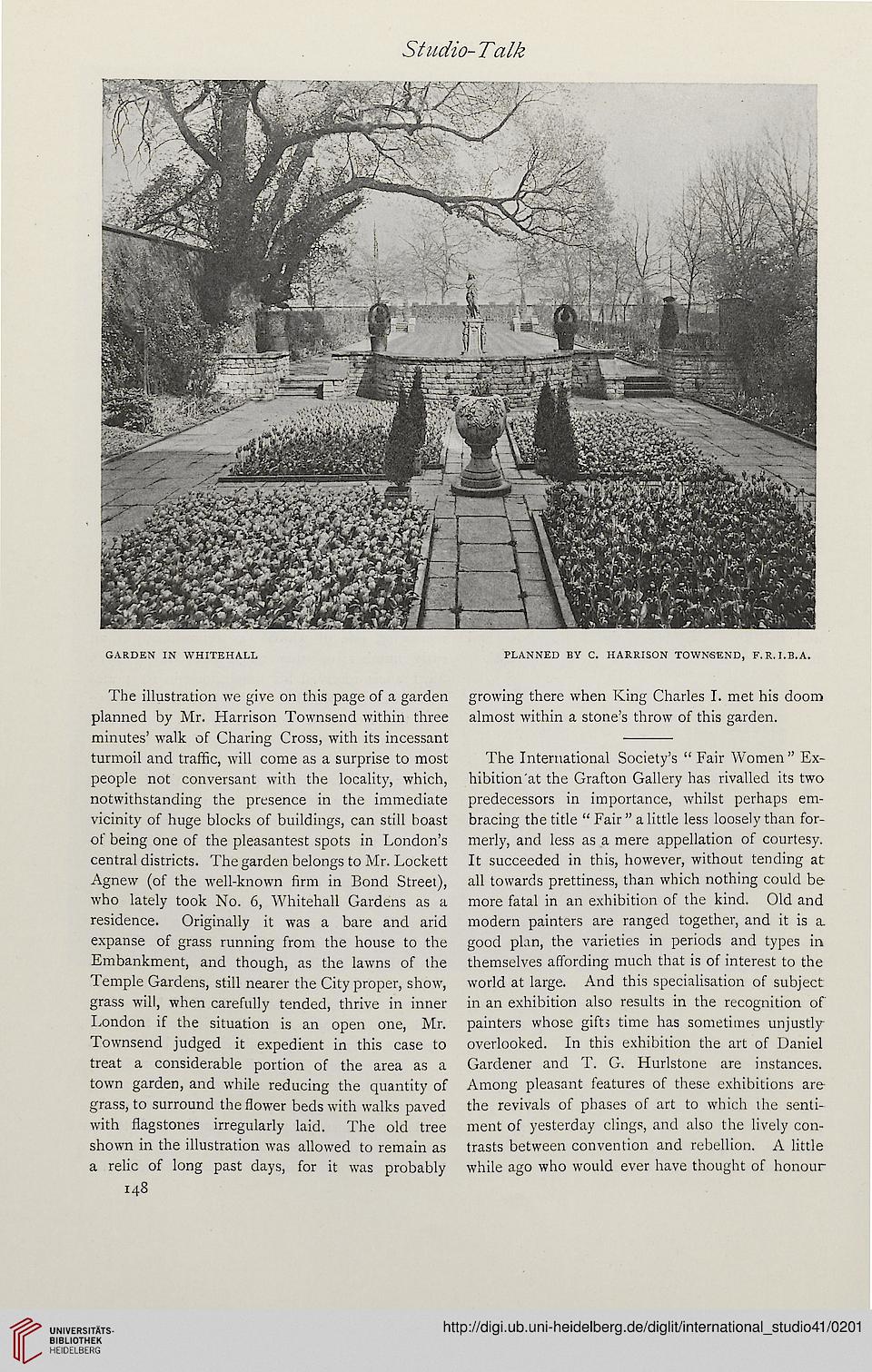 The illustration we give on this page of a garden
planned by Mr. Harrison Townsend within three
minutes' walk of Charing Cross, with its incessant
turmoil and traffic, will come as a surprise to most
people not conversant with the locality, which,
notwithstanding the presence in the immediate
vicinity of huge blocks of buildings, can still hoast
of being one of the pleasantest spots in London's
central districts. The garden belongs to Mr. Lockett
Agnevv (of the well-known firm in Bond Street),
who lately took No. 6, Whitehall Gardens as a
residence. Originally it was a bare and arid
expanse of grass running from the house to the
Embankment, and though, as the lawns of the
Temple Gardens, still nearer the City proper, show,
grass will, when carefully tended, thrive in inner
London if the situation is an open one, Mr.
Townsend judged it expedient in this case to
treat a considerable portion of the area as a
town garden, and while reducing the quantity of
grass, to surround the flower beds with walks paved
with flagstones irregularly laid. The old tree
shown in the illustration was allowed to remain as
a relic of long past days, for it was probably
148

growing there when King Charles I. met his doom
almost within a stone's throw of this garden.

The International Society's " Fair Women " Ex-
hibition'at the Grafton Gallery has rivalled its two
predecessors in importance, whilst perhaps em-
bracing the title " Fair " a little less loosely than for-
merly, and less as a mere appellation of courtesy.
It succeeded in this, however, without tending at
all towards prettiness, than which nothing could be
more fatal in an exhibition of the kind. Old and
modern painters are ranged together, and it is a.
good plan, the varieties in periods and types in
themselves affording much that is of interest to the
world at large. And this specialisation of subject
in an exhibition also results in the recognition of
painters whose gifts time has sometimes unjustly
overlooked. In this exhibition the art of Daniel
Gardener and T. G. Hurlstone are instances.
Among pleasant features of these exhibitions are
the revivals of phases of art to which the senti-
ment of yesterday clings, and also the lively con-
trasts between convention and rebellion. A little
while ago who would ever have thought of honour