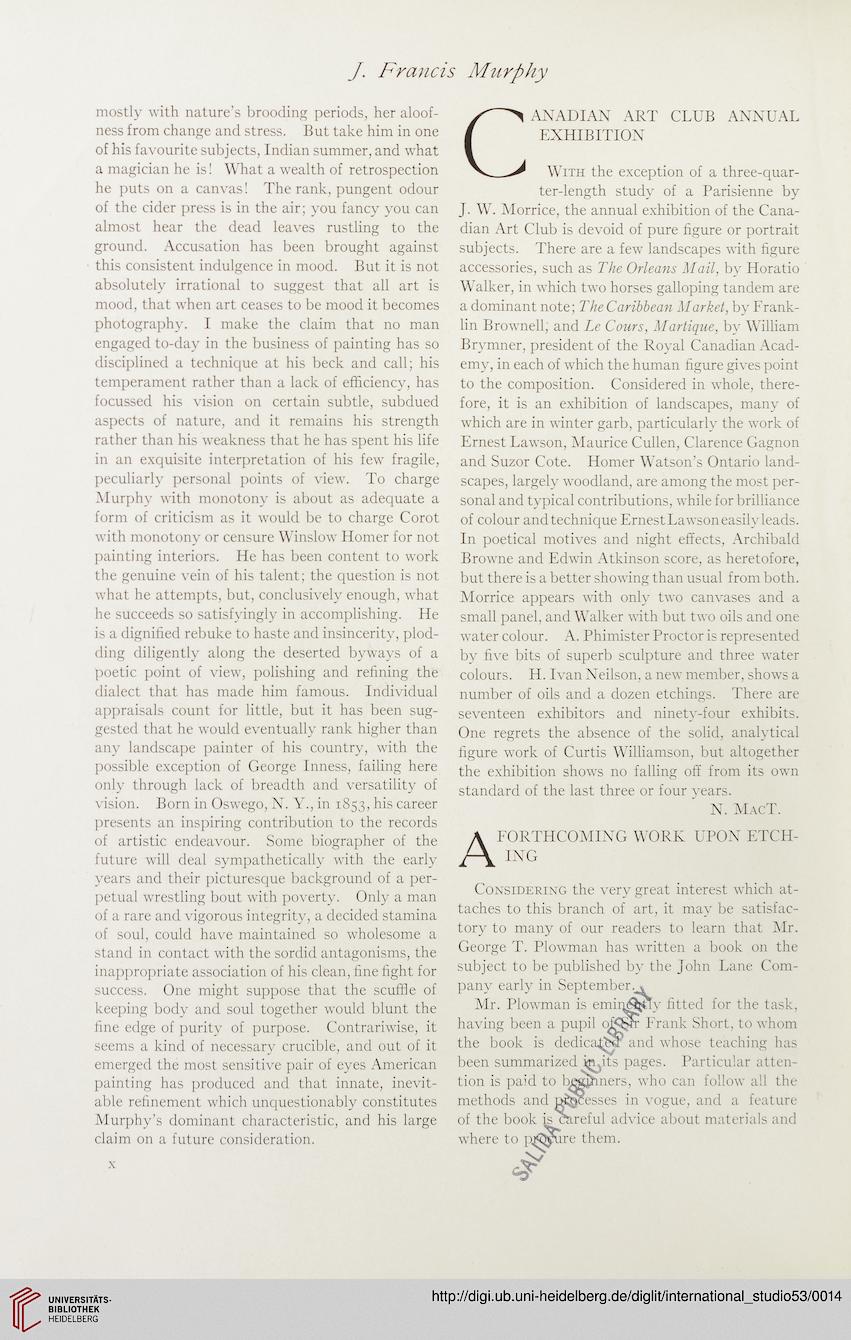 mostly with nature’s brooding periods, her aloof-
ness from change and stress. But take him in one
of his favourite subjects, Indian summer, and what
a magician he is! What a wealth of retrospection
he puts on a canvas! The rank, pungent odour
of the cider press is in the air; you fancy you can
almost hear the dead leaves rustling to the
ground. Accusation has been brought against
this consistent indulgence in mood. But it is not
absolutely irrational to suggest that all art is
mood, that when art ceases to be mood it becomes
photography. I make the claim that no man
engaged to-day in the business of painting has so
disciplined a technique at his beck and call; his
temperament rather than a lack of efficiency, has
focussed his vision on certain subtle, subdued
aspects of nature, and it remains his strength
rather than his weakness that he has spent his life
in an exquisite interpretation of his few fragile,
peculiarly personal points of view. To charge
Murphy with monotony is about as adequate a
form of criticism as it would be to charge Corot
with monotony or censure Winslow Homer for not
painting interiors. He has been content to work
the genuine vein of his talent; the question is not
what he attempts, but, conclusively enough, what
he succeeds so satisfyingly in accomplishing. He
is a dignified rebuke to haste and insincerity, plod-
ding diligently along the deserted byways of a
poetic point of view, polishing and refining the
dialect that has made him famous. Individual
appraisals count for little, but it has been sug-
gested that he would eventually rank higher than
any landscape painter of his country, with the
possible exception of George Inness, failing here
only through lack of breadth and versatility of
vision. Born in Oswego, N. Y., in 1853, his career
presents an inspiring contribution to the records
of artistic endeavour. Some biographer of the
future will deal sympathetically with the early
years and their picturesque background of a per-
petual wrestling bout with poverty. Only a man
of a rare and vigorous integrity, a decided stamina
of soul, could have maintained so wholesome a
stand in contact with the sordid antagonisms, the
inappropriate association of his clean, fine fight for
success. One might suppose that the scuffle of
keeping body and soul together would blunt the
fine edge of purity of purpose. Contrariwise, it
seems a kind of necessary crucible, and out of it
emerged the most sensitive pair of eyes American
painting has produced and that innate, inevit-
able refinement which unquestionably constitutes
Murphy’s dominant characteristic, and his large
claim on a future consideration.

With the exception of a three-quar-
ter-length study of a Parisienne by
J. W. Morrice, the annual exhibition of the Cana-
dian Art Club is devoid of pure figure or portrait
subjects. There are a few landscapes with figure
accessories, such as The Orleans Mail, by Horatio
Walker, in which two horses galloping tandem are
a dominant note; TheCaribbean Market, by Frank-
lin Brownell, and Le Cours, Martique, by William
Brymner, president of the Royal Canadian Acad-
emy, in each of which the human figure gives point
to the composition. Considered in whole, there-
fore, it is an exhibition of landscapes, many of
which are in winter garb, particularly the work of
Ernest Lawson, Maurice Cullen, Clarence Gagnon
and Suzor Cote. Homer Watson’s Ontario land-

scapes, largely woodland, are among the most per-
sonal and typical contributions, while for brilliance
of colour and technique Ernest Lawson easily leads.
In poetical motives and night effects, Archibald
Browne and Edwin Atkinson score, as heretofore,
but there is a better showing than usual from both.
Morrice appears with only two canvases and a
small panel, and Walker with but two oils and one
water colour. A. Phimister Proctor is represented
by five bits of superb sculpture and three water
colours. H. Ivan Neilson, a new member, shows a
number of oils and a dozen etchings. There are
seventeen exhibitors and ninety-four exhibits.
One regrets the absence of the solid, analytical
figure work of Curtis Williamson, but altogether
the exhibition shows no falling off from its own
standard of the last three or four years.
N. MacT.

A FORTHCOMING WORK UPON ETCH-
ING

Considering the very great interest which at-
taches to this branch of art, it may be satisfac-
tory to many of our readers to learn that Air.
George T. Plowman has written a book on the

subject to be published by the John Lane Com-
pany early in September, v
Mr. Plowman is emiiR&tlv fitted for the task,
having been a pupil oKSrr Frank Short, to whom
the book is dedica^S and whose teaching has
been summarized i^its pages. Particular atten-
tion is paid to begjhners, who can follow all the
methods and recesses in vogue, and a feature
of the book is careful advice about materials and
where to pj^ure them.