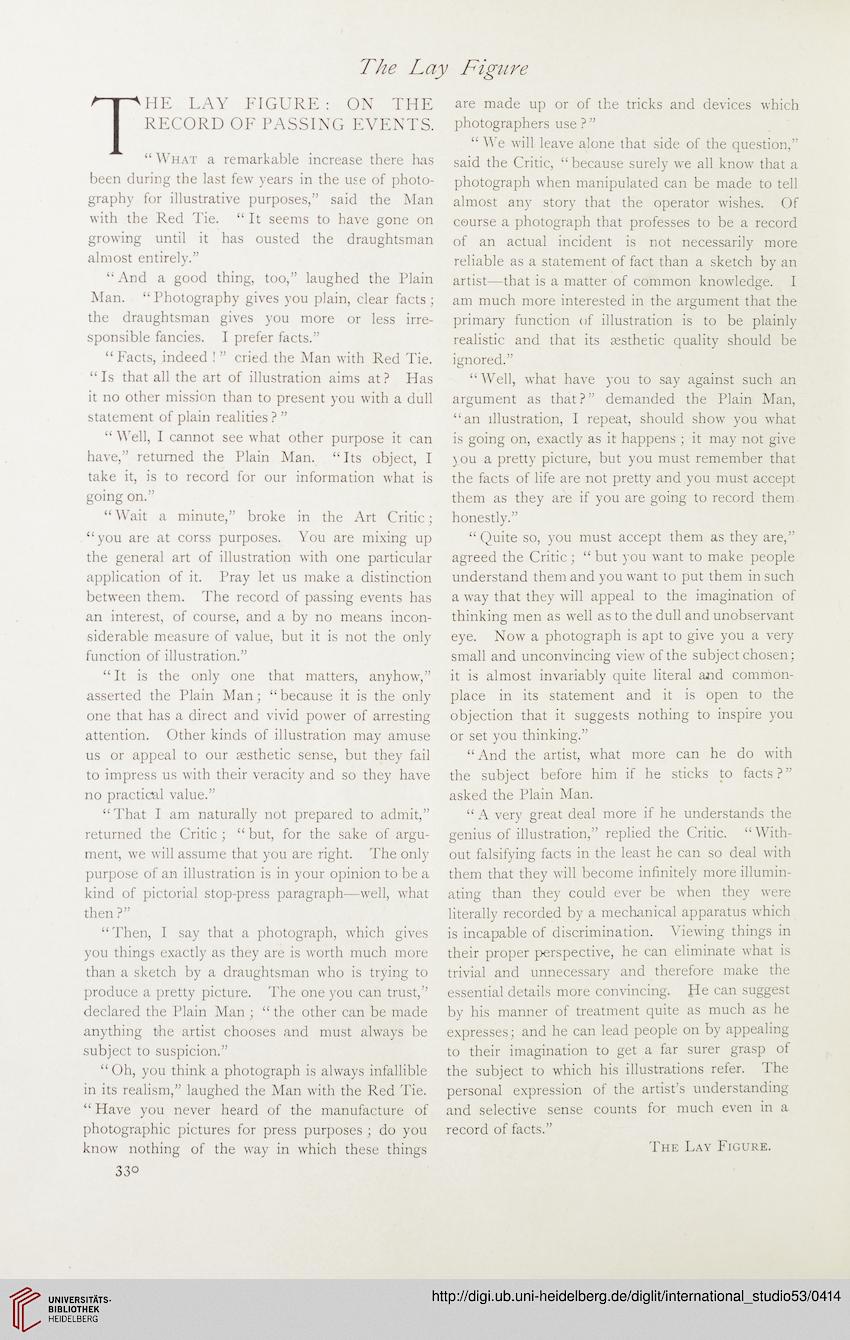 The lay figure : on the
RECORD OF PASSING EVENTS.
“What a remarkable increase there has
been during the last few years in the use of photo-
graphy for illustrative purposes,” said the Man
with the Red Tie. “ It seems to have gone on
growing until it has ousted the draughtsman
almost entirely.”
“And a good thing, too,” laughed the Plain
Man. “Photography gives you plain, clear facts;
the draughtsman gives you more or less irre-
sponsible fancies. I prefer facts.”
“ Facts, indeed .' ” cried the Man with Red Tie.
“Is that all the art of illustration aims at? Has
it no other mission than to present you with a dull
statement of plain realities ? ”
“ Well, I cannot see what other purpose it can
have,” returned the Plain Man. “Its object, I
take it, is to record for our information what is
going on.”
“Wait a minute,” broke in the Art Critic;
“you are at corss purposes. You are mixing up
the general art of illustration with one particular
application of it. Pray let us make a distinction
between them. The record of passing events has
an interest, of course, and a by no means incon-
siderable measure of value, but it is not the only
function of illustration.”
“ It is the only one that matters, anyhow,”
asserted the Plain Man; “because it is the only
one that has a direct and vivid power of arresting
attention. Other kinds of illustration may amuse
us or appeal to our assthetic sense, but they fail
to impress us with their veracity and so they have
no practical value.”
“That I am naturally not prepared to admit,”
returned the Critic ; “ but, for the sake of argu-
ment, we will assume that you are right. The only
purpose of an illustration is in your opinion to be a
kind of pictorial stop-press paragraph—well, what
then ?”
“ Then, I say that a photograph, which gives
you things exactly as they are is worth much more
than a sketch by a draughtsman who is trying to
produce a pretty picture. The one you can trust,”
declared the Plain Man ; “ the other can be made
anything the artist chooses and must always be
subject to suspicion.”
“Oh, you think a photograph is always infallible
in its realism,” laughed the Man with the Red Tie.
“ Have you never heard of the manufacture of
photographic pictures for press purposes ; do you
know nothing of the way in which these things
33°

are made up or of the tricks and devices which
photographers use ? ”
“ We will leave alone that side of the question,”
said the Critic, “ because surely we all know that a
photograph when manipulated can be made to tell
almost any story that the operator wishes. Of
course a photograph that professes to be a record
of an actual incident is not necessarily more
reliable as a statement of fact than a sketch by an
artist—that is a matter of common knowledge. I
am much more interested in the argument that the
primary function of illustration is to be plainly
realistic and that its aesthetic quality should be
ignored.”
“Well, what have you to say against such an
argument as that?” demanded the Plain Man,
“an illustration, I repeat, should show you what
is going on, exactly as it happens ; it may not give
jou a pretty picture, but you must remember that
the facts of life are not pretty and you must accept
them as they are if you are going to record them
honestly.”
“Quite so, you must accept them as they are,”
agreed the Critic; “ but you want to make people
understand them and you want to put them in such
a way that they will appeal to the imagination of
thinking men as well as to the dull and unobservant
eye. Now a photograph is apt to give you a very
small and unconvincing view of the subject chosen;
it is almost invariably quite literal and common-
place in its statement and it is open to the
objection that it suggests nothing to inspire you
or set you thinking.”
“And the artist, what more can he do with
the subject before him if he sticks to facts?”
asked the Plain Man.
“ A very great deal more if he understands the
genius of illustration,” replied the Critic. “With-
out falsifying facts in the least he can so deal with
them that they will become infinitely more illumin-
ating than they could ever be when they were
literally recorded by a mechanical apparatus which
is incapable of discrimination. Viewing things in
their proper perspective, he can eliminate what is
trivial and unnecessary and therefore make the
essential details more convincing. He can suggest
by his manner of treatment quite as much as he
expresses; and he can lead people on by appealing
to their imagination to get a far surer grasp of
the subject to which his illustrations refer. The
personal expression of the artist’s understanding
and selective sense counts for much even in a
record of facts.”