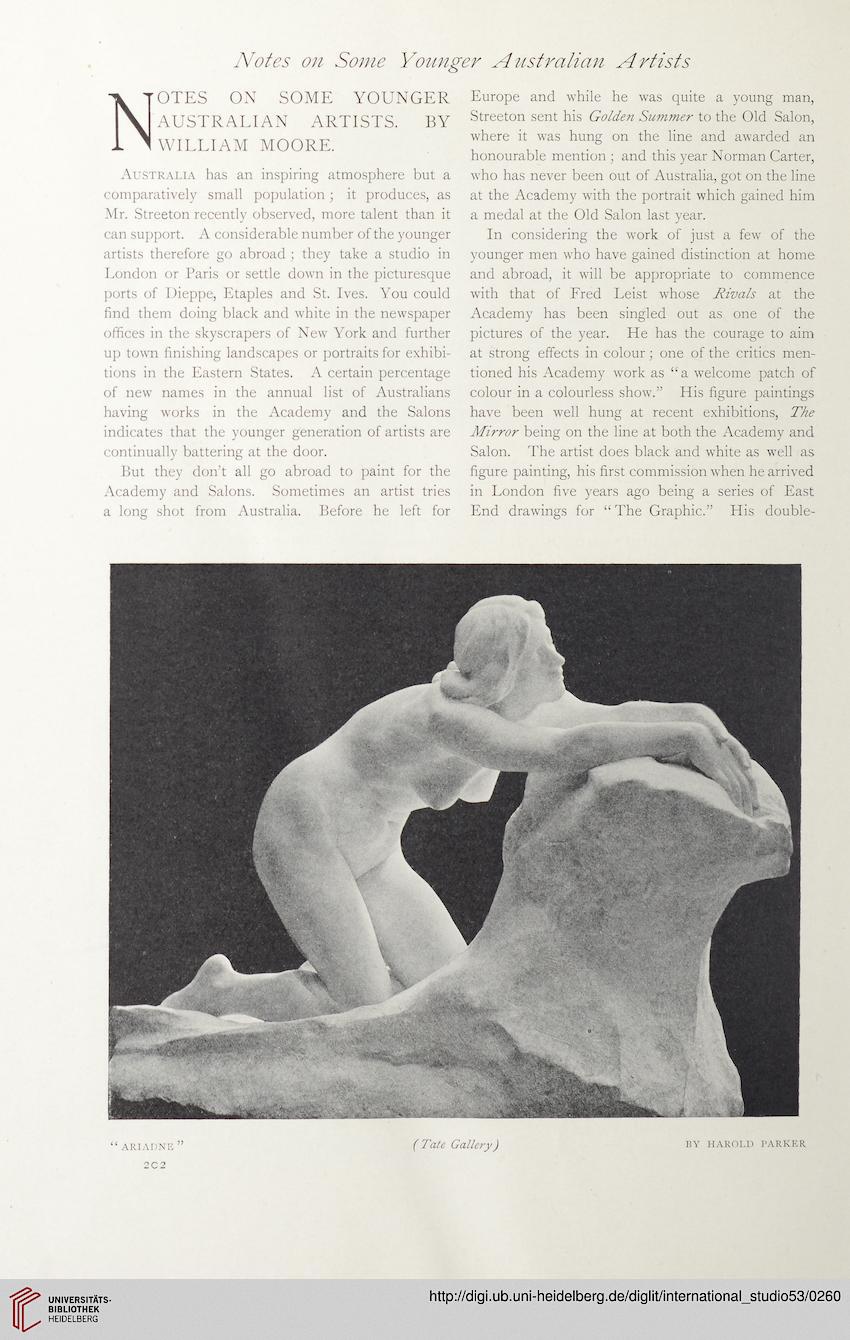 Information about OCR text
Notes on Some Younger Australian Artists

Notes on some younger
AUSTRALIAN ARTISTS. BY
WILLIAM MOORE.
Australia has an inspiring atmosphere but a
comparatively small population ; it produces, as
Mr. Streeton recently observed, more talent than it
can support. A considerable number of the younger
artists therefore go abroad ; they take a studio in
London or Paris or settle down in the picturesque
ports of Dieppe, Etaples and St. Ives. You could
find them doing black and white in the newspaper
offices in the skyscrapers of New York and further
up town finishing landscapes or portraits for exhibi-
tions in the Eastern States. A certain percentage
of new names in the annual list of Australians
having works in the Academy and the Salons
indicates that the younger generation of artists are
continually battering at the door.
But they don’t all go abroad to paint for the
Academy and Salons. Sometimes an artist tries
a long shot from Australia. Before he left for

Europe and while he was quite a young man,
Streeton sent his Golden Summer to the Old Salon,
where it was hung on the line and awarded an
honourable mention ; and this year Norman Carter,
who has never been out of Australia, got on the line
at the Academy with the portrait which gained him
a medal at the Old Salon last year.
In considering the work of just a few of the
younger men who have gained distinction at home
and abroad, it will be appropriate to commence
with that of Fred Leist whose Rivals at the
Academy has been singled out as one of the
pictures of the year. He has the courage to aim
at strong effects in colour; one of the critics men-
tioned his Academy work as “a welcome patch of
colour in a colourless show.” His figure paintings
have been well hung at recent exhibitions, The
Mirror being on the line at both the Academy and
Salon. The artist does black and white as well as
figure painting, his first commission when he arrived
in London five years ago being a series of East
End drawings for “ The Graphic.” His double-