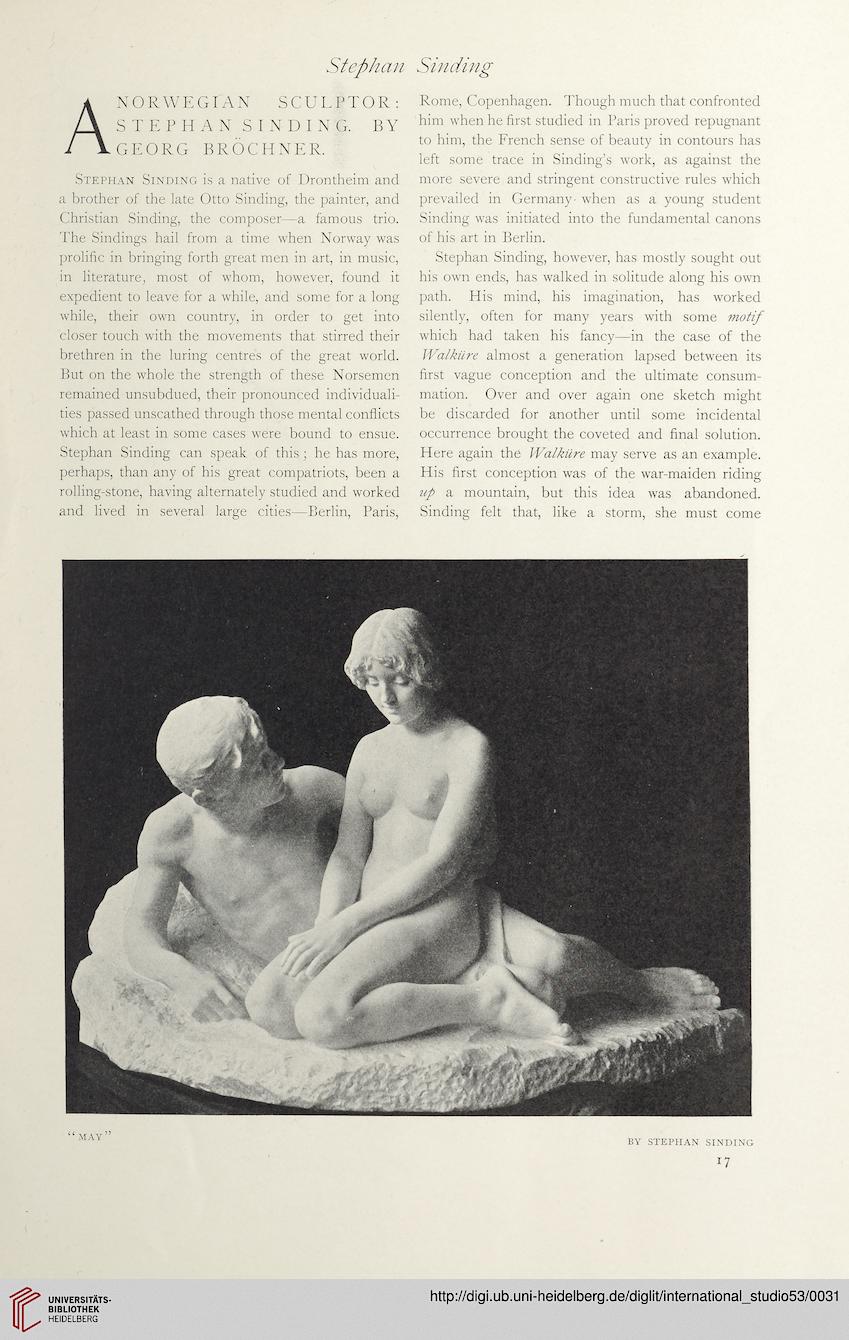 A NORWEGIAN SCULPTOR:
STEPHAN SINDING. BY
GEORG BROCHNER.
Stephan Sinding is a native of Drontheim ancl
a brother of the late Otto Sinding, the painter, and
Christian Sinding, the composer—a famous trio.
The Sindings hail from a time when Norway was
prolific in bringing forth great men in art, in music,
in literature, most of whom, however, found it
expedient to leave for a while, and some for a long
while, their own country, in order to get into
closer touch with the movements that stirred their
brethren in the luring centres of the great world.
But on the whole the strength of these Norsemen
remained unsubdued, their pronounced individuali-
ties passed unscathed through those mental conflicts
which at least in some cases were bound to ensue.
Stephan Sinding can speak of this; he has more,
perhaps, than any of his great compatriots, been a
rolling-stone, having alternately studied and worked
and lived in several large cities—Berlin, Paris,

Rome, Copenhagen. Though much that confronted
him when he first studied in Paris proved repugnant
to him, the French sense of beauty in contours has
left some trace in Sinding’s work, as against the
more severe and stringent constructive rules which
prevailed in Germany, when as a young student
Sinding was initiated into the fundamental canons
of his art in Berlin.
Stephan Sinding, however, has mostly sought out
his own ends, has walked in solitude along his own
path. His mind, his imagination, has worked
silently, often for many years with some motif
which had taken his fancy—in the case of the
Walkiire almost a generation lapsed between its
first vague conception and the ultimate consum-
mation. Over and over again one sketch might
be discarded for another until some incidental
occurrence brought the coveted and final solution.
Here again the Walkiire may serve as an example.
His first conception was of the war-maiden riding
up a mountain, but this idea was abandoned.
Sinding felt that, like a storm, she must come