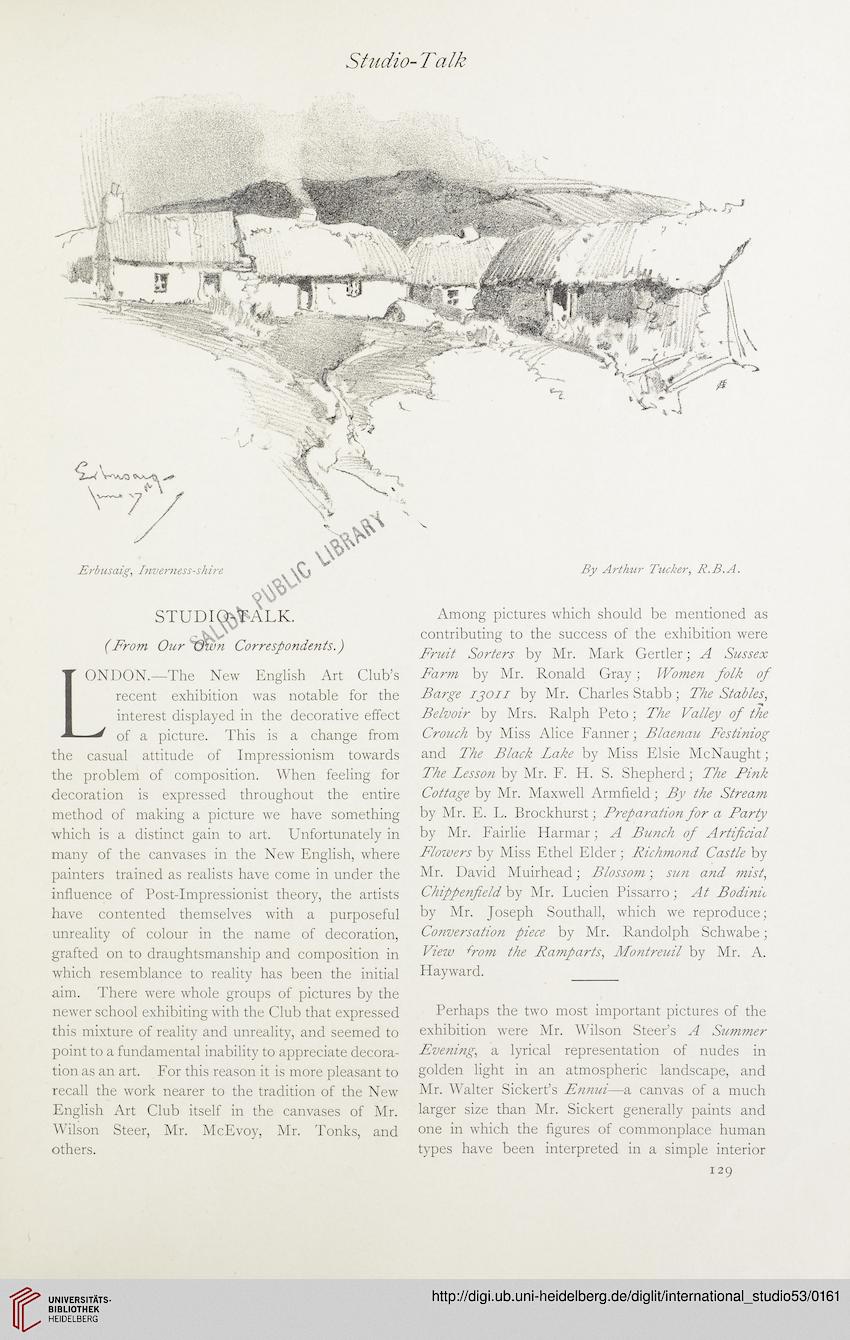 x
STUDIQs>ALK.
(From Our ~dwn Correspondents.)

By Arthur Tucker, R.B.A.
Among pictures which should be mentioned as
contributing to the success of the exhibition were
Fruit Sorters by Mr. Mark Gertler; A Sussex

LONDON.—The New English Art Club’s
recent exhibition was notable for the
interest displayed in the decorative effect
—of a picture. This is a change from
the casual attitude of Impressionism towards
the problem of composition. When feeling for
decoration is expressed throughout the entire
method of making a picture we have something
which is a distinct gain to art. Unfortunately in
many of the canvases in the New English, where
painters trained as realists have come in under the
influence of Post-Impressionist theory, the artists
have contented themselves with a purposeful
unreality of colour in the name of decoration,
grafted on to draughtsmanship and composition in
which resemblance to reality has been the initial
aim. There were whole groups of pictures by the
newer school exhibiting with the Club that expressed
this mixture of reality and unreality, and seemed to
point to a fundamental inability to appreciate decora-
tion as an art. For this reason it is more pleasant to
recall the work nearer to the tradition of the New

Farm by Mr. Ronald Gray; Women folk of
Barge 13011 by Mr. Charles Stabb; The Stables,
Belvoir by Mrs. Ralph Peto; The Valley of the
Crouch by Miss Alice Fanner; Blaenau Festiniog
and The Black Lake by Miss Elsie McNaught;
The Lesson by Mr. F. H. S. Shepherd; The Pink
Cottage by Mr. Maxwell Armfield; By the Stream
by Mr. E. L. Brockhurst; Preparation for a Party
by Mr. Fairlie Harmar; A Bunch of Artificial
Flowers by Miss Ethel Elder; Richmond Castle by
Mr. David Muirhead; Blossom; sun and mist,
Chippenfield by Mr. Lucien Pissarro ; At Bodinic
by Mr. Joseph Southall, which we reproduce ;
Conversation piece by Mr. Randolph Schwabe;
View Bom the Ramparts, Montreuil by Mr. A.
Hayward. _
Perhaps the two most important pictures of the
exhibition were Mr. Wilson Steer’s A Summer
Evening, a lyrical representation of nudes in
golden light in an atmospheric landscape, and
Mr. Walter Sickert’s Ennui—a canvas of a much

English Art Club itself in the canvases of Mr.
Wilson Steer, Mr. McEvoy, Mr. Tonks, and
others.

larger size than Mr. Sickert generally paints and
one in which the figures of commonplace human
types have been interpreted in a simple interior