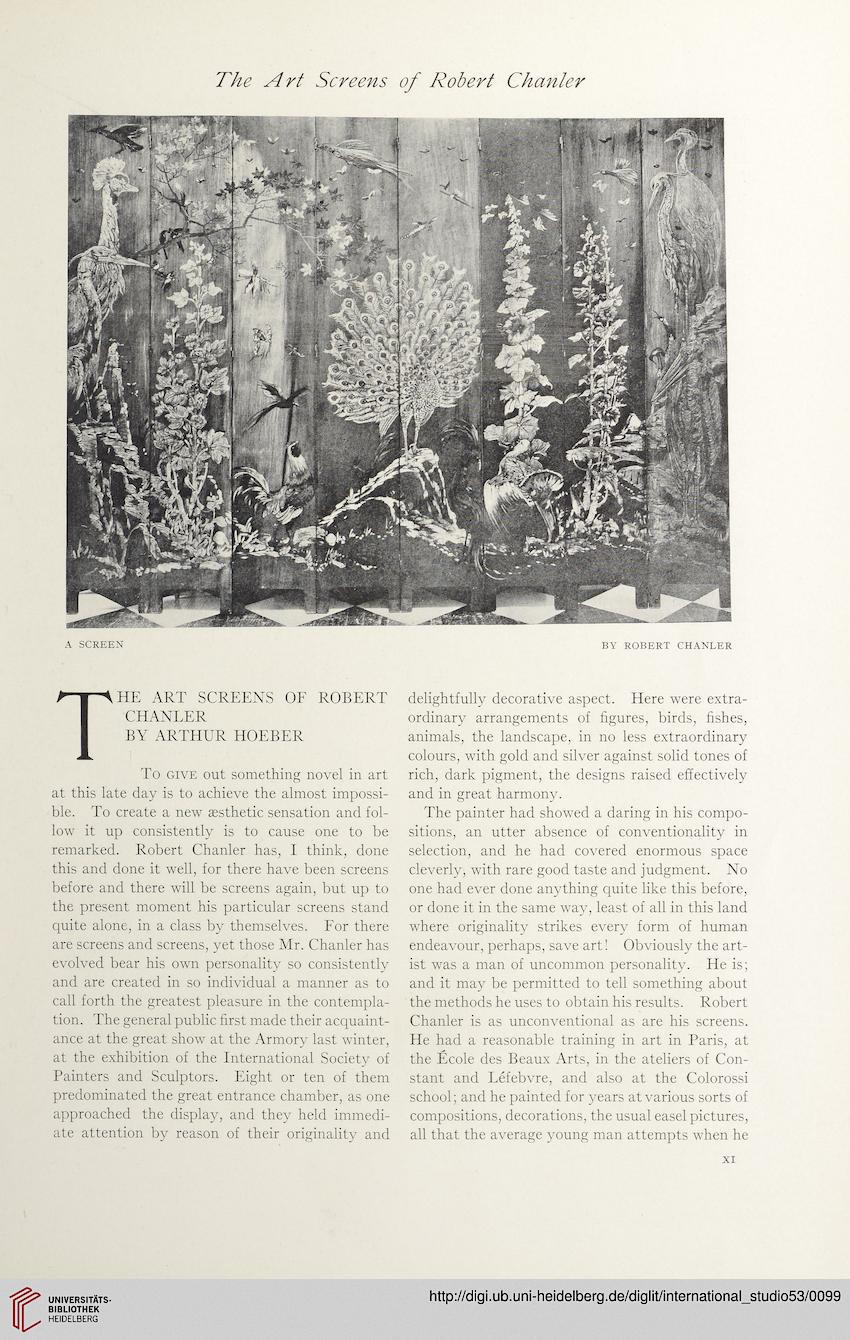 Information about OCR text
The Art Screens of Robert Chanter

The art screens of Robert
CHANLER
BY ARTHUR HOEBER
To give out something novel in art
at this late day is to achieve the almost impossi-
ble. To create a new aesthetic sensation and fol-
low it up consistently is to cause one to be
remarked. Robert Chanler has, I think, done
this and done it well, for there have been screens
before and there will be screens again, but up to
the present moment his particular screens stand
quite alone, in a class by themselves. For there
are screens and screens, yet those Mr. Chanler has
evolved bear his own personality so consistently
and are created in so individual a manner as to
call forth the greatest pleasure in the contempla-
tion. The general public first made their acquaint-
ance at the great show at the Armory last winter,
at the exhibition of the International Society of
Painters and Sculptors. Eight or ten of them
predominated the great entrance chamber, as one
approached the display, and they held immedi-
ate attention by reason of their originality and

delightfully decorative aspect. Here were extra-
ordinary arrangements of figures, birds, fishes,
animals, the landscape, in no less extraordinary
colours, with gold and silver against solid tones of
rich, dark pigment, the designs raised effectively
and in great harmony.
The painter had showed a daring in his compo-
sitions, an utter absence of conventionality in
selection, and he had covered enormous space
cleverly, with rare good taste and judgment. No
one had ever done anything quite like this before,
or done it in the same way, least of all in this land
where originality strikes every form of human
endeavour, perhaps, save art! Obviously the art-
ist was a man of uncommon personality. He is;
and it may be permitted to tell something about
the methods he uses to obtain his results. Robert
Chanler is as unconventional as are his screens.
He had a reasonable training in art in Paris, at
the Ecole des Beaux Arts, in the ateliers of Con-
stant and Lefebvre, and also at the Colorossi
school; and he painted for years at various sorts of
compositions, decorations, the usual easel pictures,
all that the average young man attempts when he