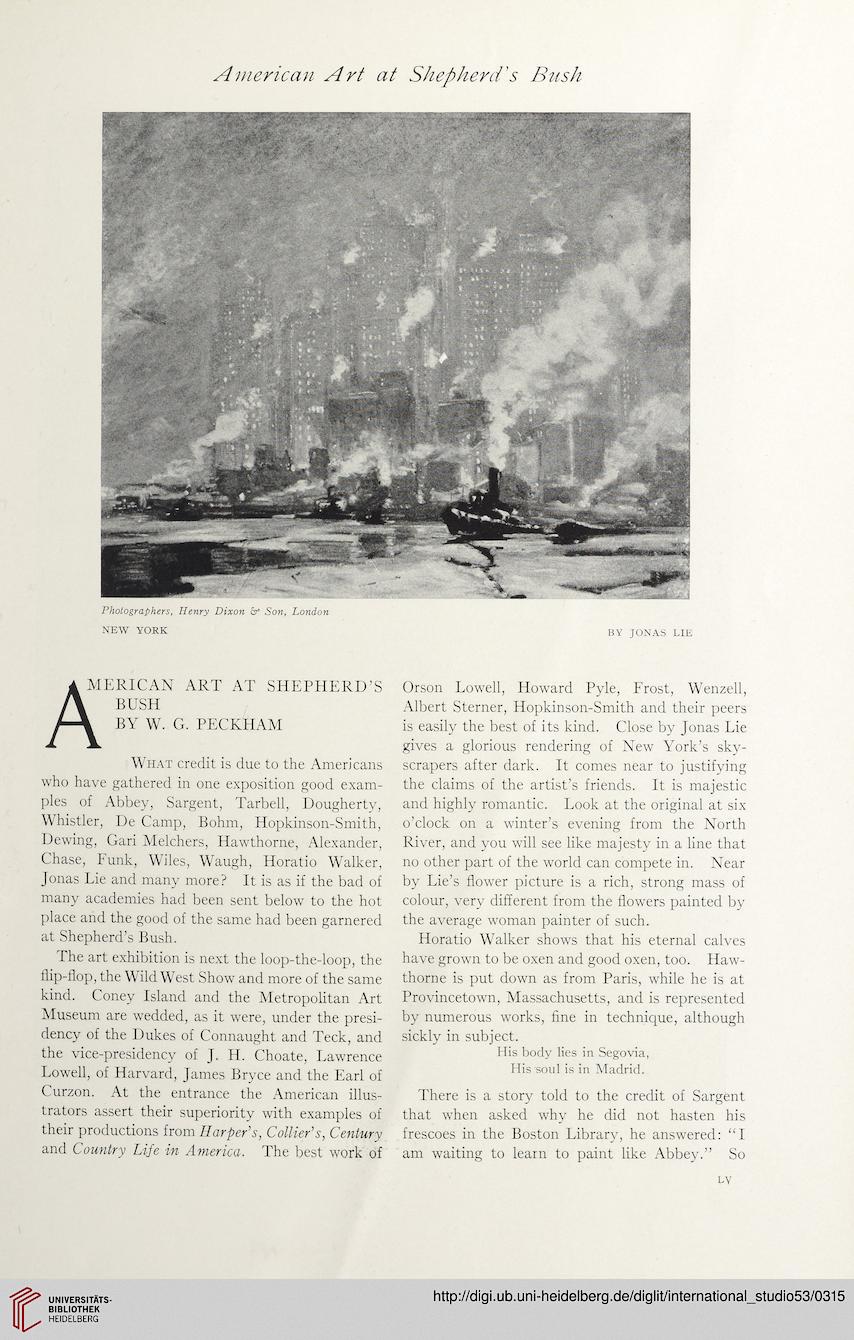 AMERICAN ART AT SHEPHERD’S
/\ BUSH
X-X BY W. G. PECKHAM
What credit is due to the Americans
who have gathered in one exposition good exam-
ples of Abbey, Sargent, Tarbell, Dougherty,
Whistler, De Camp, Bohm, Hopkinson-Smith,
Dewing, Gari Melchers, Hawthorne, Alexander,
Chase, Funk, Wiles, Waugh, Horatio Walker,
Jonas Lie and many more? It is as if the bad of
many academies had been sent below to the hot
place and the good of the same had been garnered
at Shepherd’s Bush.
The art exhibition is next the loop-the-loop, the
flip-flop, the Wild West Show and more of the same
kind. Coney Island and the Metropolitan Art
Museum are wedded, as it were, under the presi-
dency of the Dukes of Connaught and Teck, and
the vice-presidency of J. H. Choate, Lawrence
Lowell, of Harvard, James Bryce and the Earl of
Curzon. At the entrance the American illus-
trators assert their superiority with examples of
their productions from Harper's, Collier's, Century
and Country Life in America. The best work of

Orson Lowell, Howard Pyle, Frost, Wenzell,
Albert Sterner, Hopkinson-Smith and their peers
is easily the best of its kind. Close by Jonas Lie
gives a glorious rendering of New York’s sky-
scrapers after dark. It comes near to justifying
the claims of the artist’s friends. It is majestic
and highly romantic. Look at the original at six
o’clock on a winter’s evening from the North
River, and you will see like majesty in a line that
no other part of the world can compete in. Near
by Lie’s flower picture is a rich, strong mass of
colour, very different from the flowers painted by
the average woman painter of such.
Horatio Walker shows that his eternal calves
have grown to be oxen and good oxen, too. Haw-
thorne is put down as from Paris, while he is at
Provincetown, Massachusetts, and is represented
by numerous works, fine in technique, although
sickly in subject.
His body lies in Segovia,
His soul is in Madrid.
There is a story told to the credit of Sargent
that when asked why he did not hasten his
frescoes in the Boston Library, he answered: “I
am waiting to learn to paint like Abbey.” So
LV