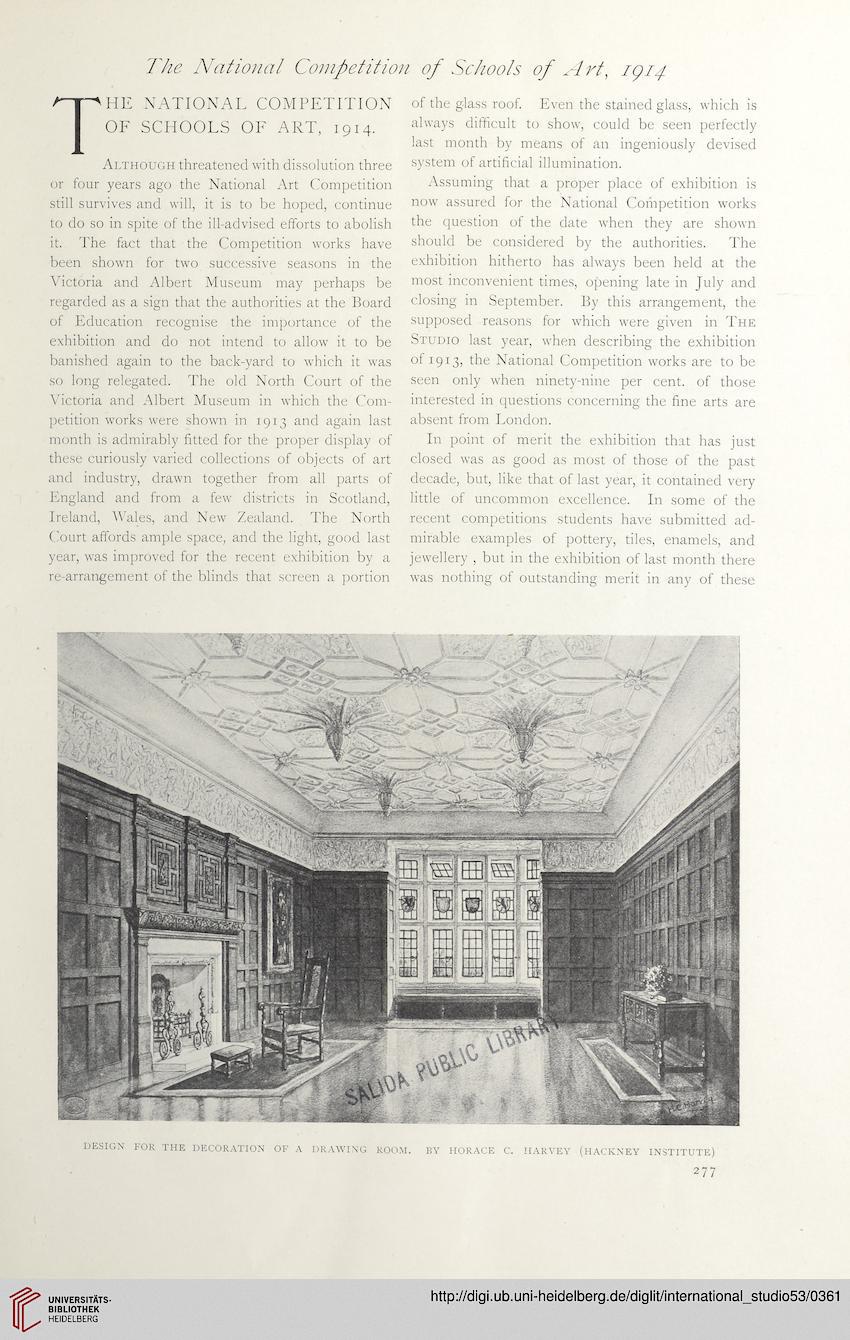 Information about OCR text
The National Competition of Schools of Art, 1914

The national competition
OF SCHOOLS OF ART, 1914.
Although threatened with dissolution three
or four years ago the National Art Competition
still survives and will, it is to be hoped, continue
to do so in spite of the ill-advised efforts to abolish
it. The fact that the Competition works have
been shown for two successive seasons in the
Victoria and Albert Museum may perhaps be
regarded as a sign that the authorities at the Board
of Education recognise the importance of the
exhibition and do not intend to allow it to be
banished again to the back-yard to which it was
so long relegated. The old North Court of the
Victoria and Albert Museum in which the Com-
petition works were shown in 1913 and again last
month is admirably fitted for the proper display of
these curiously varied collections of objects of art
and industry, drawn together from all parts of
England and from a few districts in Scotland,
Ireland, Wales, and New Zealand. The North
Court affords ample space, and the light, good last
year, was improved for the recent exhibition by a
re-arrangement of the blinds that screen a portion

of the glass roof. Even the stained glass, which is
always difficult to show, could be seen perfectly
last month by means of an ingeniously devised
system of artificial illumination.
Assuming that a proper place of exhibition is
now assured for the National Cofnpetition works
the question of the date when they are shown
should be considered by the authorities. The
exhibition hitherto has always been held at the
most inconvenient times, opening late in July and
closing in September. By this arrangement, the
supposed reasons for which were given in The
Studio last year, when describing the exhibition
of 1913, the National Competition works are to be
seen only when ninety-nine per cent, of those
interested in questions concerning the fine arts are
absent from London.
In point of merit the exhibition that has just
closed was as good as most of those of the past
decade, but, like that of last year, it contained very
little of uncommon excellence. In some of the
recent competitions students have submitted ad-
mirable examples of pottery, tiles, enamels, and
jewellery , but in the exhibition of last month there
was nothing of outstanding merit in any of these


DESIGN FOR THE DECORATION OF A DRAWING ROOM. BY HORACE C. IIARVEY (HACKNEY INSTITUTE)
277