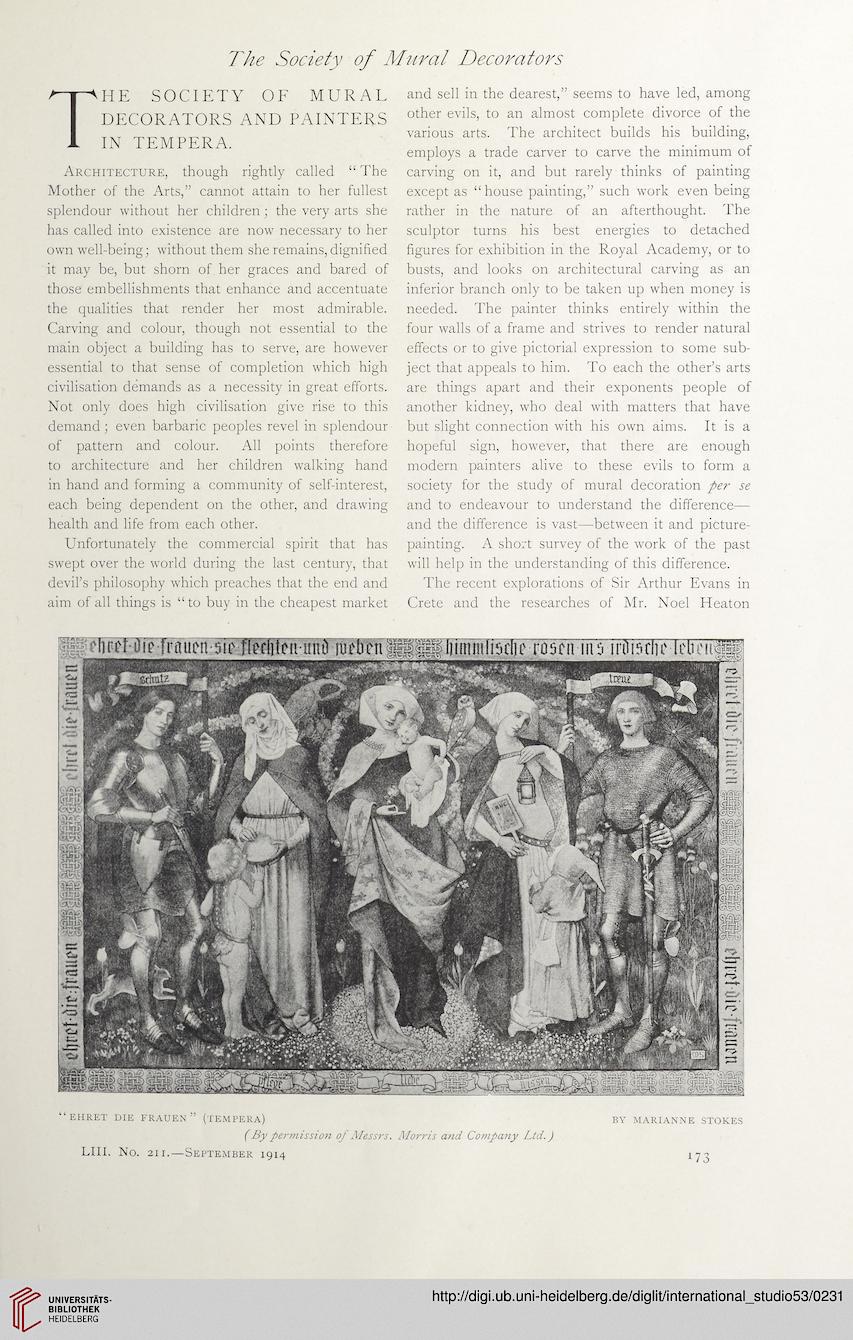 Information about OCR text
The Society of Mural Decorators

The society of mural
DECORATORS AND PAINTERS
IN TEMPERA.
Architecture, though rightly called “ The
Mother of the Arts,” cannot attain to her fullest
splendour without her children; the very arts she
has called into existence are now necessary to her
own well-being; without them she remains, dignified
it may be, but shorn of her graces and bared of
those embellishments that enhance and accentuate
the qualities that render her most admirable.
Carving and colour, though not essential to the
main object a building has to serve, are however
essential to that sense of completion which high
civilisation demands as a necessity in great efforts.
Not only does high civilisation give rise to this
demand; even barbaric peoples revel in splendour
of pattern and colour. All points therefore
to architecture and her children walking hand
in hand and forming a community of self-interest,
each being dependent on the other, and drawing
health and life from each other.
Unfortunately the commercial spirit that has
swept over the world during the last century, that
devil’s philosophy which preaches that the end and
aim of all things is “ to buy in the cheapest market

and sell in the dearest,” seems to have led, among
other evils, to an almost complete divorce of the
various arts. The architect builds his building,
employs a trade carver to carve the minimum of
carving on it, and but rarely thinks of painting
except as “ house painting,” such work even being
rather in the nature of an afterthought. The
sculptor turns his best energies to detached
figures for exhibition in the Royal Academy, or to
busts, and looks on architectural carving as an
inferior branch only to be taken up when money is
needed. The painter thinks entirely within the
four walls of a frame and strives to render natural
effects or to give pictorial expression to some sub-
ject that appeals to him. To each the other’s arts
are things apart and their exponents people of
another kidney, who deal with matters that have
but slight connection with his own aims. It is a
hopeful sign, however, that there are enough
modern painters alive to these evils to form a
society for the study of mural decoration per se
and to endeavour to understand the difference—-
and the difference is vast—between it and picture-
painting. A short survey of the work of the past
will help in the understanding of this difference.
The recent explorations of Sir Arthur Evans in
Crete and the researches of Mr. Noel Heaton