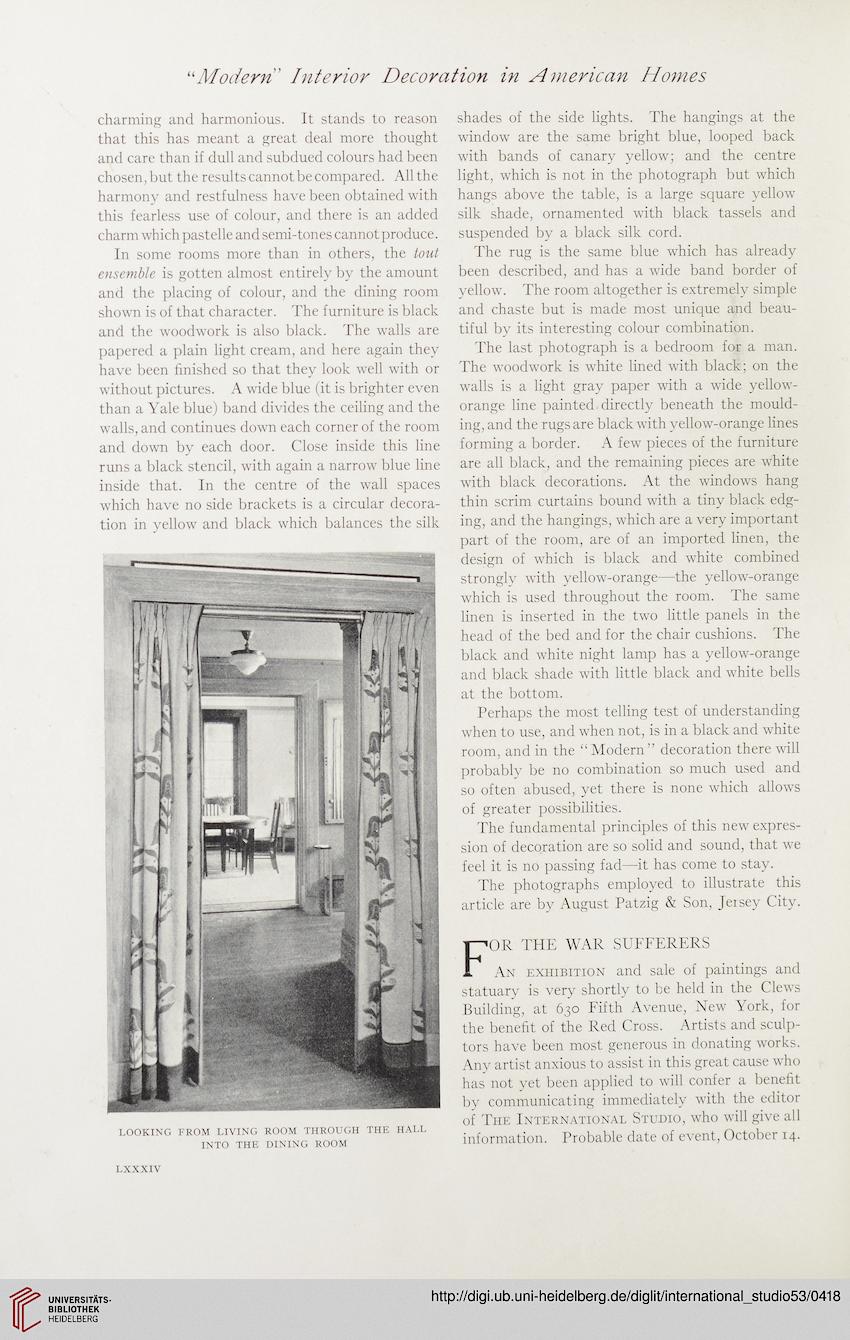 charming and harmonious. It stands to reason
that this has meant a great deal more thought
and care than if dull and subdued colours had been
chosen, but the results cannot be compared. All the
harmony and restfulness have been obtained with
this fearless use of colour, and there is an added
charm which pastelle and semi-tones cannot produce.
In some rooms more than in others, the tout
ensemble is gotten almost entirely by the amount
and the placing of colour, and the dining room
shown is of that character. The furniture is black
and the woodwork is also black. The walls are
papered a plain light cream, and here again they
have been finished so that they look well with or
without pictures. A wide blue (it is brighter even
than a Yale blue) band divides the ceiling and the
walls, and continues down each corner of the room
and down by each door. Close inside this line
runs a black stencil, with again a narrow blue line
inside that. In the centre of the wall spaces
which have no side brackets is a circular decora-
tion in yellow and black which balances the silk

LOOKING FROM LIVING ROOM THROUGH THE HALL
INTO THE DINING ROOM


shades of the side lights. The hangings at the
window are the same bright blue, looped back
with bands of canary yellow; and the centre
light, which is not in the photograph but which
hangs above the table, is a large square yellow
silk shade, ornamented with black tassels and
suspended by a black silk cord.
The rug is the same blue which has already
been described, and has a wide band border of
yellow. The room altogether is extremely simple
and chaste but is made most unique and beau-
tiful by its interesting colour combination.
The last photograph is a bedroom for a man.
The woodwork is white lined with black; on the
walls is a light gray paper with a wide yellow-
orange line painted directly beneath the mould-
ing, and the rugs are black with yellow-orange lines
forming a border. A few pieces of the furniture
are all black, and the remaining pieces are white
with black decorations. At the windows hang
thin scrim curtains bound with a tiny black edg-
ing, and the hangings, which are a very important
part of the room, are of an imported linen, the
design of which is black and white combined
strongly with yellow-orange—the yellow-orange
which is used throughout the room. The same
linen is inserted in the two little panels in the
head of the bed and for the chair cushions. The
black and white night lamp has a yellow-orange
and black shade with little black and white bells
at the bottom.
Perhaps the most telling test of understanding
when to use, and when not, is in a black and white
room, and in the “Modern” decoration there will
probably be no combination so much used and
so often abused, yet there is none which allows
of greater possibilities.
The fundamental principles of this new expres-
sion of decoration are so solid and sound, that we
feel it is no passing fad—it has come to stay.
The photographs employed to illustrate this
article are by August Patzig & Son, Jeisey City.
R THE WAR SUFFERERS
,N exhibition and sale of paintings and
statuary is very shortly to be held in the Clews
Building, at 630 Fifth Avenue, New York, for
the benefit of the Red Cross. Artists and sculp-
tors have been most generous in donating works.
Any artist anxious to assist in this great cause who
has not yet been applied to will confer a benefit
by communicating immediately with the editor
of The International Studio, who will give all
information. Probable date of event, October 14.