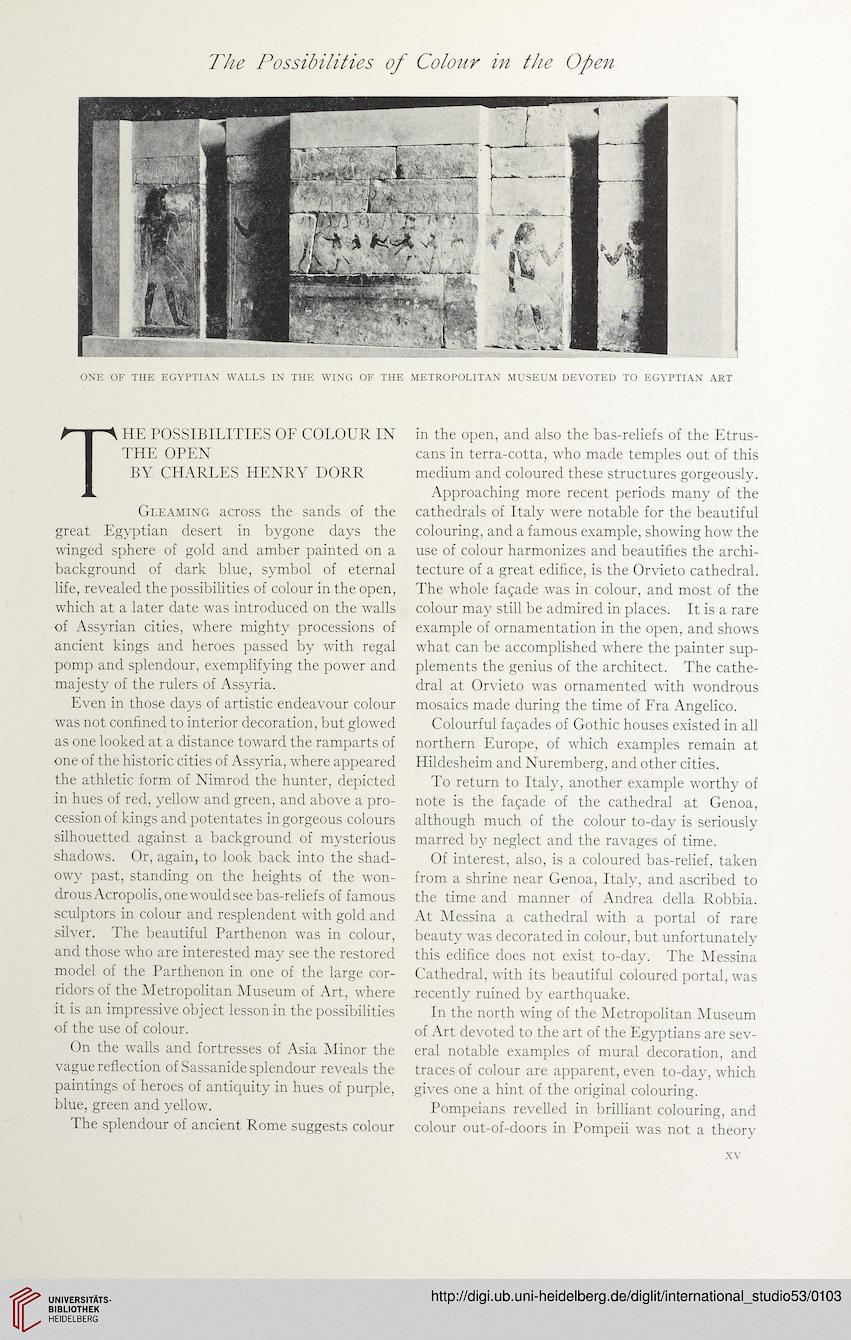 Information about OCR text
The Possibilities of Colour in the Open

The possibilities of colour in
THE OPEN
BY CHARLES HENRY DORR
Gleaming across the sands of the
great Egyptian desert in bygone days the
winged sphere of gold and amber painted on a
background of dark blue, symbol of eternal
life, revealed the possibilities of colour in the open,
which at a later date was introduced on the walls
of Assyrian cities, where mighty processions of
ancient kings and heroes passed by with regal
pomp and splendour, exemplifying the power and
majesty of the rulers of Assyria.
Even in those days of artistic endeavour colour
was not confined to interior decoration, but glowed
as one looked at a distance toward the ramparts of
one of the historic cities of Assyria, where appeared
the athletic form of Nimrod the hunter, depicted
in hues of red, yellow and green, and above a pro-
cession of kings and potentates in gorgeous colours
silhouetted against a background of mysterious
shadows. Or, again, to look back into the shad-
owy past, standing on the heights of the won-
drous Acropolis, one would see bas-reliefs of famous
sculptors in colour and resplendent with gold and
silver. The beautiful Parthenon was in colour,
and those who are interested may see the restored
model of the Parthenon in one of the large cor-
ridors of the Metropolitan Museum of Art, where
it is an impressive object lesson in the possibilities
of the use of colour.
On the walls and fortresses of Asia Minor the
vague reflection of Sassanide splendour reveals the
paintings of heroes of antiquity in hues of purple,
blue, green and yellow.
The splendour of ancient Rome suggests colour

in the open, and also the bas-reliefs of the Etrus-
cans in terra-cotta, who made temples out of this
medium and coloured these structures gorgeously.
Approaching more recent periods many of the
cathedrals of Italy were notable for the beautiful
colouring, and a famous example, showing how the
use of colour harmonizes and beautifies the archi-
tecture of a great edifice, is the Orvieto cathedral.
The whole facade was in colour, and most of the
colour may still be admired in places. It is a rare
example of ornamentation in the open, and shows
what can be accomplished where the painter sup-
plements the genius of the architect. The cathe-
dral at Orvieto was ornamented with wondrous
mosaics made during the time of Fra Angelico.
Colourful facades of Gothic houses existed in all
northern Europe, of which examples remain at
Hildesheim and Nuremberg, and other cities.
To return to Italy, another example worthy of
note is the facade of the cathedral at Genoa,
although much of the colour to-day is seriously
marred by neglect and the ravages of time.
Of interest, also, is a coloured bas-relief, taken
from a shrine near Genoa, Italy, and ascribed to
the time and manner of Andrea della Robbia.
At Messina a cathedral with a portal of rare
beauty was decorated in colour, but unfortunately
this edifice does not exist to-day. The Messina
Cathedral, with its beautiful coloured portal, was
recently ruined by earthquake.
In the north wing of the Metropolitan Museum
of Art devoted to the art of the Egyptians are sev-
eral notable examples of mural decoration, and
traces of colour are apparent, even to-day, which
gives one a hint of the original colouring.
Pompeians revelled in brilliant colouring, and
colour out-of-doors in Pompeii was not a theory
xv