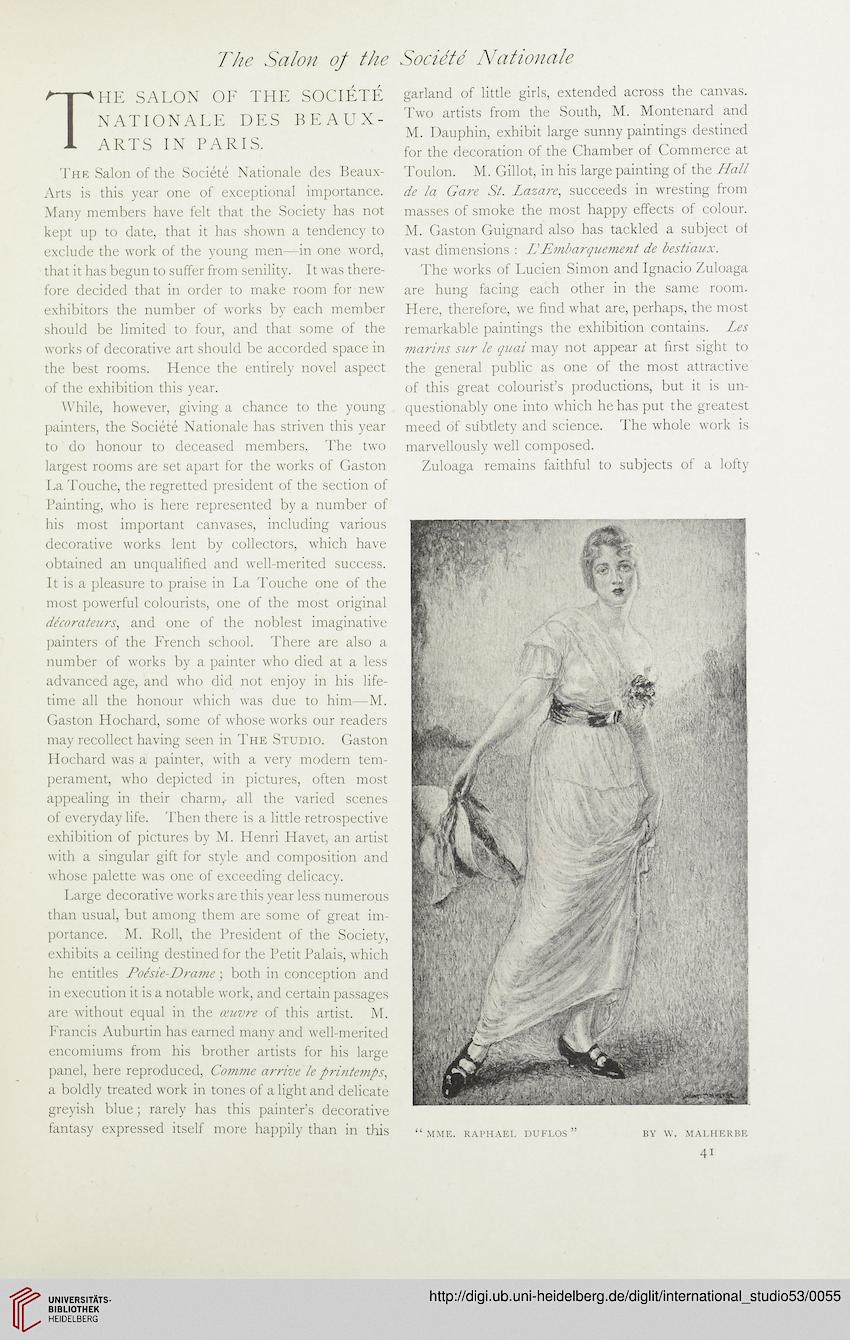 Information about OCR text
The Salon of the
The salon of the societe
NATIONALE DES BEAUX-
ARTS IN PARIS.

The Salon of the Societe Nationale des Beaux-
Arts is this year one of exceptional importance.
Many members have felt that the Society has not
kept up to date, that it has shown a tendency to
exclude the work of the young men—in one word,
that it has begun to suffer from senility. It was there-
fore decided that in order to make room for new
exhibitors the number of works by each member
should be limited to four, and that some of the
works of decorative art should be accorded space in
the best rooms. Hence the entirely novel aspect
of the exhibition this year.
While, however, giving a chance to the young
painters, the Societe Nationale has striven this year
to do honour to deceased members. The two
largest rooms are set apart for the works of Gaston
La Touche, the regretted president of the section of
Painting, who is here represented by a number of
his most important canvases, including various
decorative works lent by collectors, which have
obtained an unqualified and well-merited success.
It is a pleasure to praise in La Touche one of the
most powerful colourists, one of the most original
decorateurs, and one of the noblest imaginative
painters of the French school. There are also a
number of works by a painter who died at a less
advanced age, and who did not enjoy in his life-
time all the honour which was due to him—M.
Gaston Hochard, some of whose works our readers
may recollect having seen in The Studio. Gaston
Hochard was a painter, with a very modern tem-
perament, who depicted in pictures, often most
appealing in their charm, all the varied scenes
of everyday life. Then there is a little retrospective
exhibition of pictures by M. Henri Havet, an artist
with a singular gift for style and composition and
whose palette was one of exceeding delicacy.
Large decorative works are this year less numerous
than usual, but among them are some of great im-
portance. M. Roll, the President of the Society,
exhibits a ceiling destined for the Petit Palais, which
he entitles Poesie-Drame; both in conception and
in execution it is a notable work, and certain passages
are without equal in the oeuvre of this artist. M.
Francis Auburtin has earned many and well-merited
encomiums from his brother artists for his large
panel, here reproduced, Comme arrive le printemps,
a boldly treated work in tones of a light and delicate
greyish blue; rarely has this painter’s decorative
fantasy expressed itself more happily than in this

Societe Nationale
garland of little girls, extended across the canvas.
Two artists from the South, M. Montenard and
M. Dauphin, exhibit large sunny paintings destined
for the decoration of the Chamber of Commerce at
Toulon. M. Gillot, in his large painting of the Hall
de la Gare St. Lazare, succeeds in wresting from
masses of smoke the most happy effects of colour.
M. Gaston Guignard also has tackled a subject of
vast dimensions : LIEmbarquement de bestiaux.
The works of Lucien Simon and Ignacio Zuloaga
are hung facing each other in the same room.
Here, therefore, we find what are, perhaps, the most
remarkable paintings the exhibition contains. Les
marins stir le quai may not appear at first sight to
the general public as one of the most attractive
of this great colourist’s productions, but it is un-
questionably one into which he has put the greatest
meed of subtlety and science. The whole work is
marvellously well composed.
Zuloaga remains faithful to subjects of a lofty