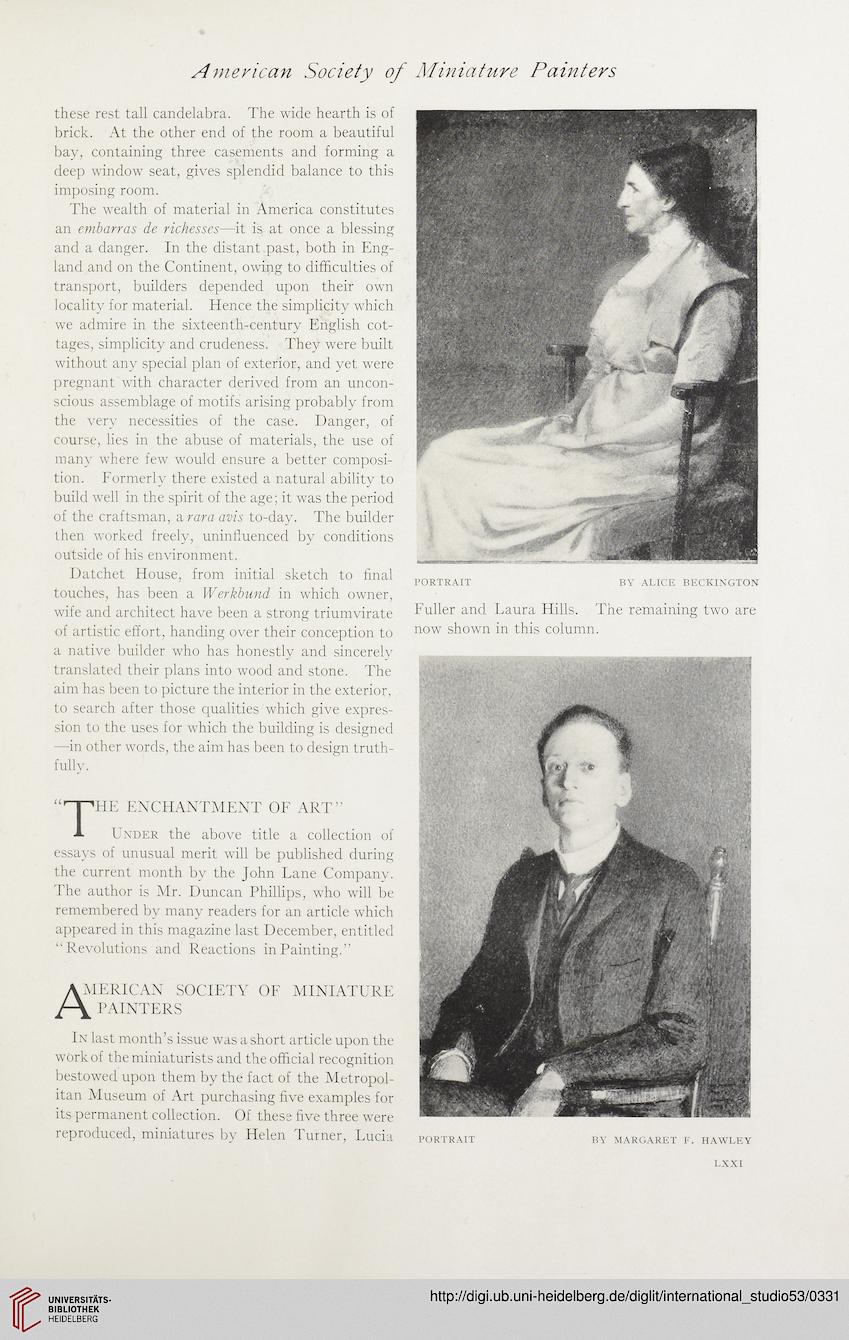 these rest tall candelabra. The wide hearth is of
brick. At the other end of the room a beautiful
bay, containing three casements and forming a
deep window seat, gives splendid balance to this
imposing room.
The wealth of material in America constitutes
an embarras de richesses—it is at once a blessing
and a danger. In the distant past, both in Eng-
land and on the Continent, owing to difficulties of
transport, builders depended upon their own
locality for material. Hence the simplicity which
we admire in the sixteenth-century English cot-
tages, simplicity and crudeness. They were built
without any special plan of exterior, and yet were
pregnant with character derived from an uncon-
scious assemblage of motifs arising probably from
the very necessities of the case. Danger, of
course, lies in the abuse of materials, the use of
many where few would ensure a better composi-
tion. Formerly there existed a natural ability to
build well in the spirit of the age; it was the period
of the craftsman, a rare avis to-day. The builder
then worked freely, uninfluenced by conditions
outside of his environment.
Datchet House, from initial sketch to final
touches, has been a Werkbund in which owner,
wife and architect have been a strong triumvirate
of artistic effort, handing over their conception to
a native builder who has honestly and sincerely
translated their plans into wood and stone. The
aim has been to picture the interior in the exterior,
to search after those qualities which give expres-
sion to the uses for which the building is designed
—in other words, the aim has been to design truth-
fully.
E ENCHANTMENT OF ART”
Under the above title a collection of
essays of unusual merit will be published during
the current month by the John Lane Company.
The author is Mr. Duncan Phillips, who will be
remembered by many readers for an article which
appeared in this magazine last December, entitled
“Revolutions and Reactions in Painting.”
AMERICAN SOCIETY OF MINIATURE
PAINTERS
In last month’s issue was a short article upon the
work of the miniaturists and the official recognition
bestowed upon them by the fact of the Metropol-
itan Museum of Art purchasing five examples for
its permanent collection. Of these five three were
reproduced, miniatures by Helen Turner, Lucia

Fuller and. Laura Hills. The remaining two are
now shown in this column.