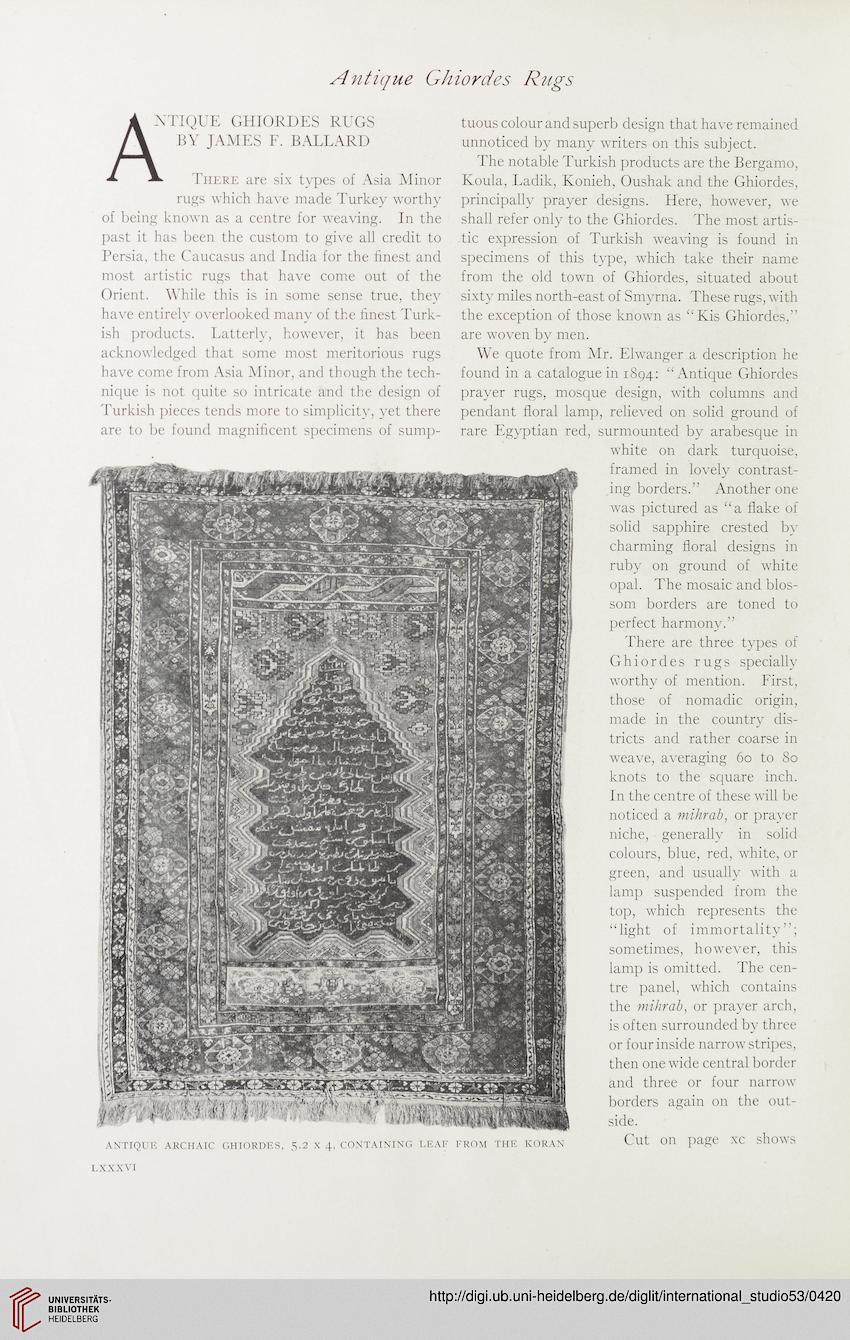 There are six types of Asia Minor
rugs which have made Turkey worthy
of being known as a centre for weaving. In the
past it has been the custom to give all credit to
Persia, the Caucasus and India for the finest and

most artistic rugs that have come out of the
Orient. While this is in some sense true, they
have entirely overlooked many of the finest Turk-

ish products. Latterly, however, it has been

tuous colour and superb design that have remained
unnoticed by many writers on this subject.
The notable Turkish products are the Bergamo,
Koula, Ladik, Konieh, Oushak and the Ghiordes,
principally prayer designs. Here, however, we
shall refer only to the Ghiordes. The most artis-
tic expression of Turkish weaving is found in
specimens of this type, which take their name
from the old town of Ghiordes, situated about
sixty miles north-east of Smyrna. These rugs, with
the exception of those known as “Kis Ghiordes,”
are woven by men.

acknowledged that some most meritorious rugs
have come from Asia Minor, and though the tech-
nique is not quite so intricate and the design of
Turkish pieces tends more to simplicity, yet there
are to be found magnificent specimens of sump-

We quote from Mr. Elwanger a description he
found in a catalogue in 1894: “Antique Ghiordes
prayer rugs, mosque design, with columns and
pendant floral lamp, relieved on solid ground of
rare Egyptian red, surmounted by arabesque in
white on dark turquoise,
framed in lovely contrast-
ing borders.” Another one
was pictured as “a flake of
solid sapphire crested by
charming floral designs in
ruby on ground of white
opal. The mosaic and blos-
som borders are toned to
perfect harmony.”
There are three types of
Ghiordes rugs specially
worthy of mention. First,
those of nomadic origin,
made in the country dis-
tricts and rather coarse in
weave, averaging 60 to 80
knots to the square inch.
In the centre of these will be
noticed a mihrab, or prayer
niche, generally in solid
colours, blue, red, white, or
green, and usually with a
lamp suspended from the
top, which represents the
“light of immortality”;
sometimes, however, this
lamp is omitted. The cen-
tre panel, which contains
the mihrab, or prayer arch,
is often surrounded by three
or four inside narrow stripes,
then one wide central border
and three or four narrow
borders again on the out-
side.
Cut on page xc shows