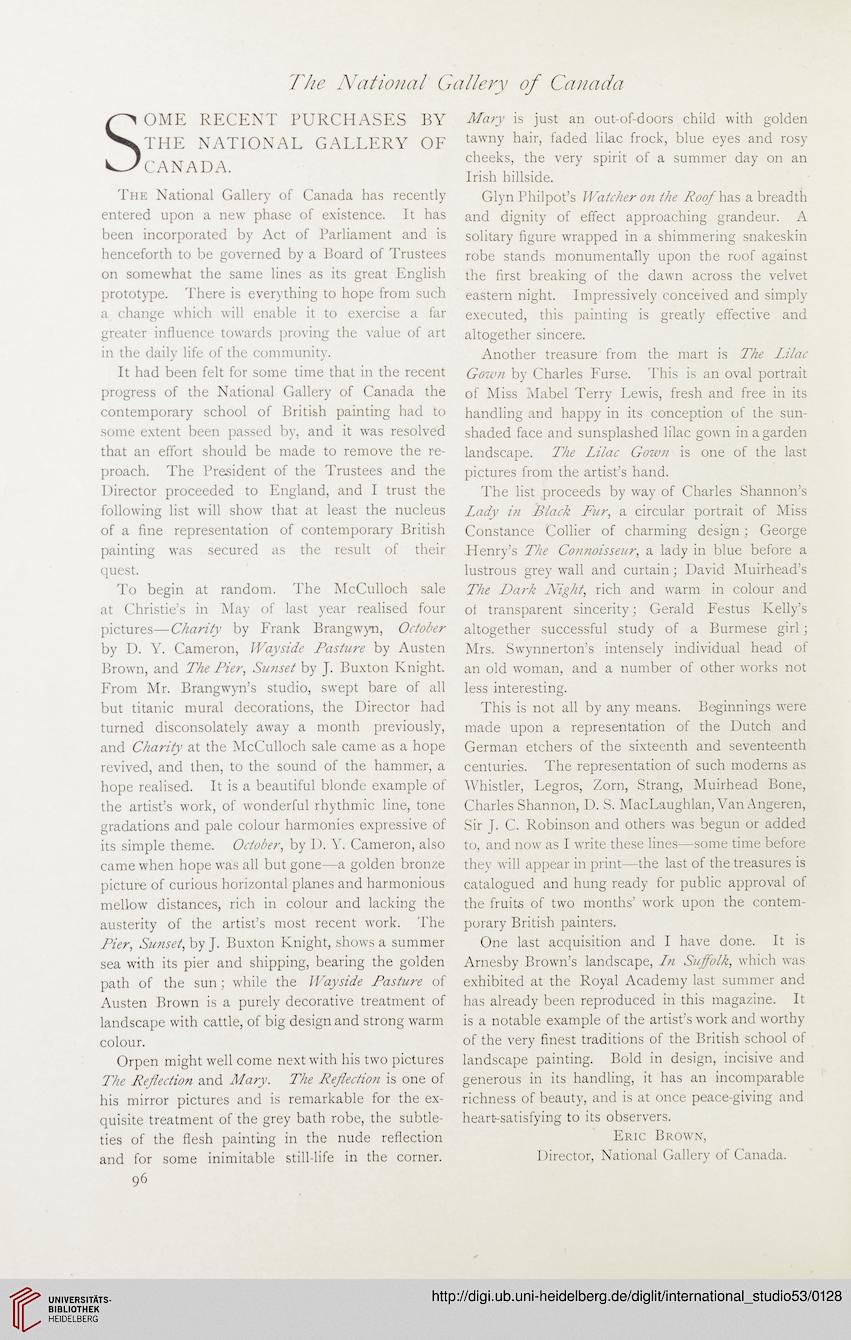 Information about OCR text
The National Gallery of Canada

SOME RECENT PURCHASES BY
THE NATIONAL GALLERY OF
CANADA.
The National Gallery of Canada has recently
entered upon a new phase of existence. It has
been incorporated by Act of Parliament and is
henceforth to be governed by a Board of Trustees
on somewhat the same lines as its great English
prototype. There is everything to hope from such
a change which will enable it to exercise a far
greater influence towards proving the value of art
in the daily life of the community.
It had been felt for some time that in the recent
progress of the National Gallery of Canada the
contemporary school of British painting had to
some extent been passed by, and it was resolved
that an effort should be made to remove the re-
proach. The President of the Trustees and the
Director proceeded to England, and I trust the
following list will show that at least the nucleus
of a fine representation of contemporary British
painting was secured as the result of their
quest.
To begin at random. The McCulloch sale
at Christie’s in May of last year realised four
pictures—Charity by Frank Brangwyn, October
by D. Y. Cameron, Wayside Pasture by Austen
Brown, and The Pier, Sunset by J. Buxton Knight.
From Mr. Brangwyn’s studio, swept bare of all
but titanic mural decorations, the Director had
turned disconsolately away a month previously,
and Charity at the McCulloch sale came as a hope
revived, and then, to the sound of the hammer, a
hope realised. It is a beautiful blonde example of
the artist’s work, of wonderful rhythmic line, tone
gradations and pale colour harmonies expressive of
its simple theme. October, by D. Y. Cameron, also
came when hope was all but gone—a golden bronze
picture of curious horizontal planes and harmonious
mellow distances, rich in colour and lacking the
austerity of the artist’s most recent work. The
Pier, Sunset, by J. Buxton Knight, shows a summer
sea with its pier and shipping, bearing the golden
path of the sun; while the Wayside Pasture of
Austen Brown is a purely decorative treatment of
landscape with cattle, of big design and strong warm
colour.
Orpen might well come next with his two pictures
The Reflection and Mary. The Reflection is one of
his mirror pictures and is remarkable for the ex-
quisite treatment of the grey bath robe, the subtle-
ties of the flesh painting in the nude reflection
and for some inimitable still-life in the corner.
96

Mary is just an out-of-doors child with golden
tawny hair, faded lilac frock, blue eyes and rosy
cheeks, the very spirit of a summer day on an
Irish hillside.
Glyn Philpot’s Watcher on the Roof\\&?> a breadth
and dignity of effect approaching grandeur. A
solitary figure wrapped in a shimmering snakeskin
robe stands monumentally upon the roof against
the first breaking of the dawn across the velvet
eastern night. Impressively conceived and simply
executed, this painting is greatly effective and
altogether sincere.
Another treasure from the mart is The Lilac
Gown by Charles Furse. This is an oval portrait
of Miss Mabel Terry Lewis, fresh and free in its
handling and happy in its conception of the sun-
shaded face and sunsplashed lilac gown in a garden
landscape. The Lilac Gown is one of the last
pictures from the artist’s hand.
The list proceeds by way of Charles Shannon’s
Lady in Black Fur, a circular portrait of Miss
Constance Collier of charming design; George
Henry’s The Connoisseur, a lady in blue before a
lustrous grey wall and curtain; David Muirhead’s
The Dark Night, rich and warm in colour and
of transparent sincerity; Gerald Festus Kelly’s
altogether successful study of a Burmese girl;
Mrs. Swynnerton’s intensely individual head of
an old woman, and a number of other works not
less interesting.
This is not all by any means. Beginnings were
made upon a representation of the Dutch and
German etchers of the sixteenth and seventeenth
centuries. The representation of such moderns as
Whistler, Legros, Zorn, Strang, Muirhead Bone,
Charles Shannon, D. S. MacLaughlan, Van Angeren,
Sir J. C. Robinson and others was begun or added
to, and now as I write these lines—some time before
they will appear in print—the last of the treasures is
catalogued and hung ready for public approval of
the fruits of two months’ work upon the contem-
porary British painters.
One last acquisition and I have done. It is
Arnesby Brown’s landscape, Ln Suffolk, which was
exhibited at the Royal Academy last summer and
has already been reproduced in this magazine. It
is a notable example of the artist’s work and worthy
of the very finest traditions of the British school of
landscape painting. Bold in design, incisive and
generous in its handling, it has an incomparable
richness of beauty, and is at once peace-giving and
heart-satisfying to its observers.
Eric Brown,
Director, National Gallery of Canada.