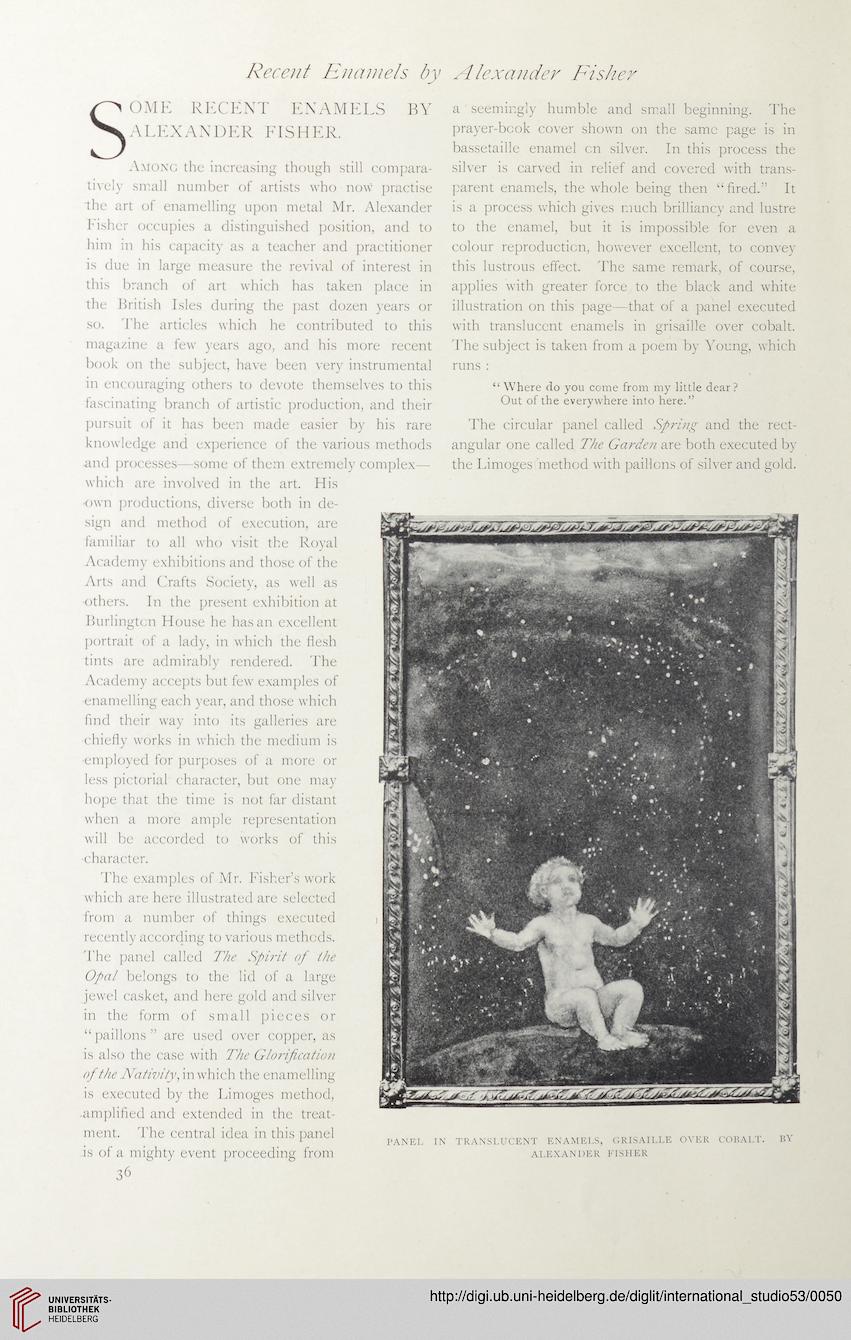 
SOME RECENT ENAMELS BY
ALEXANDER EISHER.
Among the increasing though still compara-
tively small number of artists who now practise
the art of enamelling upon metal Mr. Alexander
Fisher occupies a distinguished position, and to
him in his capacity as a teacher and practitioner
is due in large measure the revival of interest in
this branch of art which has taken place in
the British Isles during the past dozen years or
so. The articles which he contributed to this
magazine a few years ago, and his more recent
book on the subject, have been very instrumental
in encouraging others to devote themselves to this
fascinating branch of artistic production, and their
pursuit of it has been made easier by his rare
knowledge and experience of the various methods
and processes—some of them extremely complex—
which are involved in the art. His
•own productions, diverse both in de-
sign and method of execution, are
familiar to all who visit the Royal
Academy exhibitions and those of the
Arts and Crafts Society, as well as
others. In the present exhibition at
Burlington House he has an excellent
portrait of a lady, in which the flesh
tints are admirably rendered. The
Academy accepts but few examples of
enamelling each year, and those which
find their way into its galleries are
chiefly works in which the medium is
•employed for purposes of a more or
less pictorial character, but one may
hope that the time is not far distant
when a more ample representation
will be accorded to works of this
character.
The examples of Mr. Fisher’s work
which are here illustrated are selected
from a number of things executed
recently according to various methods.
The panel called The Spirit of the
Opal belongs to the lid of a large
jewel casket, and here gold and silver
in the form of small pieces or
“pailions” are used over copper, as
is also the case with The Glorification
of the Nativity, in which the enamelling
is executed by the Limoges method,
amplified and extended in the treat¬
ment. I'he central idea in this panel
is of a mighty event proceeding from
fid

a seemingly humble and small beginning. The
prayer-book cover shown on the same page is in
bassetaille enamel cn silver. In this process the
silver is carved in relief and covered with trans-
parent enamels, the whole being then “fired.” It
is a process which gives much brilliancy and lustre
to the enamel, but it is impossible for even a
colour reproduction, however excellent, to convey
this lustrous effect. The same remark, of course,
applies with greater force to the black and white
illustration on this page—that of a panel executed
with translucent enamels in grisaille over cobalt.
The subject is taken from a poem by Young, which
runs :
“ Where do you come from my little dear?
Out of the everywhere into here.”
The circular panel called Spring and the rect-
angular one called The Garden are both executed by
the Limoges method with pailions of silver and gold.

PANEL IN TRANSLUCENT ENAMELS, GRISAILLE OVER COBALT. BY
ALEXANDER FISHER