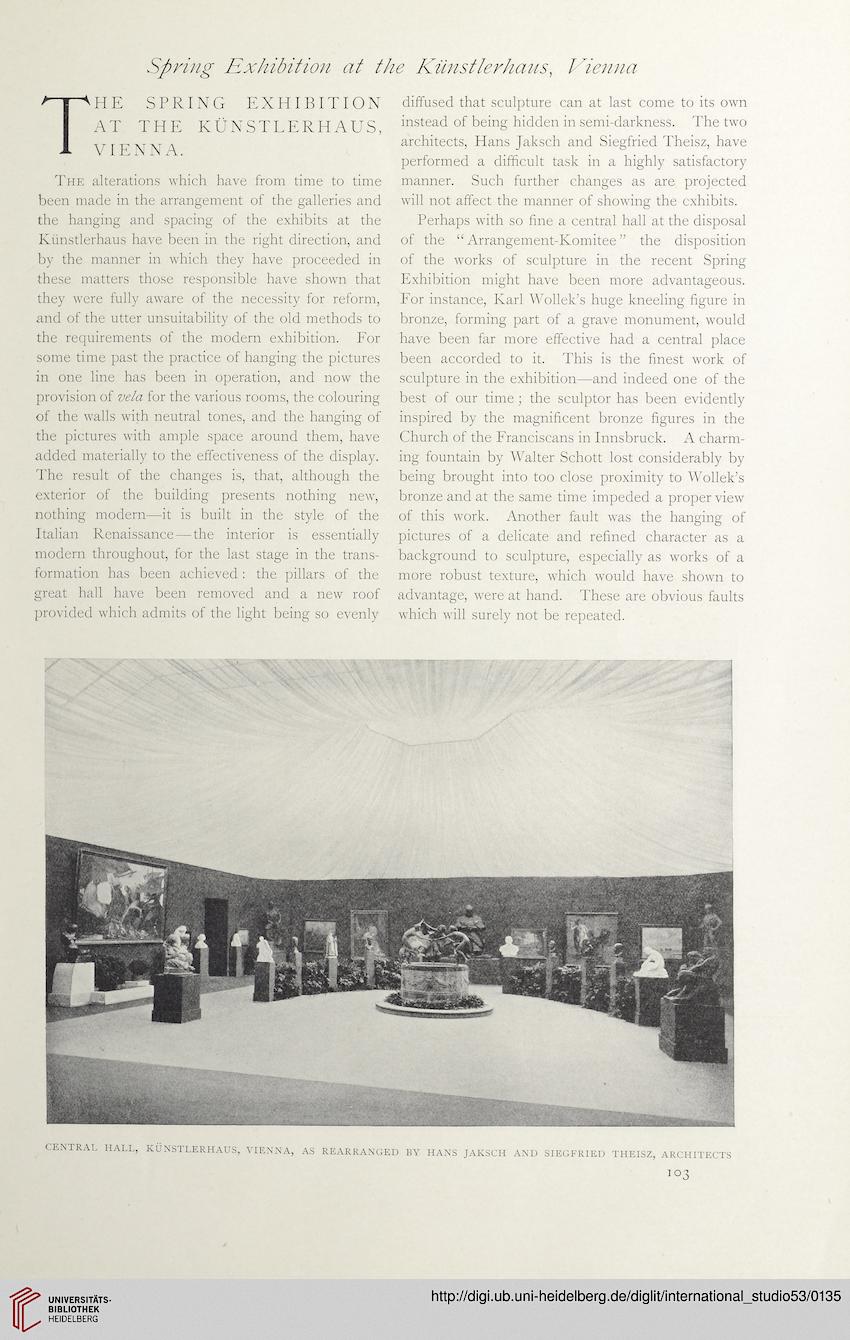 Information about OCR text
Spring Exhibition at the Kunstlerhaus, Vienna

The spring exhibition
AT THE KUNSTLERHAUS,
VIENNA.
The alterations which have from time to time
been made in the arrangement of the galleries and
the hanging and spacing of the exhibits at the
Kiinstlerhaus have been in the right direction, and
by the manner in which they have proceeded in
these matters those responsible have shown that
they were fully aware of the necessity for reform,
and of the utter unsuitability of the old methods to
the requirements of the modern exhibition. For
some time past the practice of hanging the pictures
in one line has been in operation, and now the
provision of vela for the various rooms, the colouring
of the walls with neutral tones, and the hanging of
the pictures with ample space around them, have
added materially to the effectiveness of the display.
The result of the changes is, that, although the
exterior of the building presents nothing new,
nothing modern—it is built in the style of the
Italian Renaissance — the interior is essentially
modern throughout, for the last stage in the trans-
formation has been achieved : the pillars of the
great hall have been removed and a new roof
provided which admits of the light being so evenly

diffused that sculpture can at last come to its own
instead of being hidden in semi-darkness. The two
architects, Hans Jaksch and Siegfried Theisz, have
performed a difficult task in a highly satisfactory
manner. Such further changes as are projected
will not affect the manner of showing the exhibits.
Perhaps with so fine a central hall at the disposal
of the “ Arrangement-Komitee ” the disposition
of the works of sculpture in the recent Spring
Exhibition might have been more advantageous.
For instance, Karl Wollek’s huge kneeling figure in
bronze, forming part of a grave monument, would
have been far more effective had a central place
been accorded to it. This is the finest work of
sculpture in the exhibition—and indeed one of the
best of our time; the sculptor has been evidently
inspired by the magnificent bronze figures in the
Church of the Franciscans in Innsbruck. A charm-
ing fountain by Walter Schott lost considerably by
being brought into too close proximity to Wollek’s
bronze and at the same time impeded a proper view
of this work. Another fault was the hanging of
pictures of a delicate and refined character as a
background to sculpture, especially as works of a
more robust texture, which would have shown to
advantage, were at hand. These are obvious faults
which will surely not be repeated.