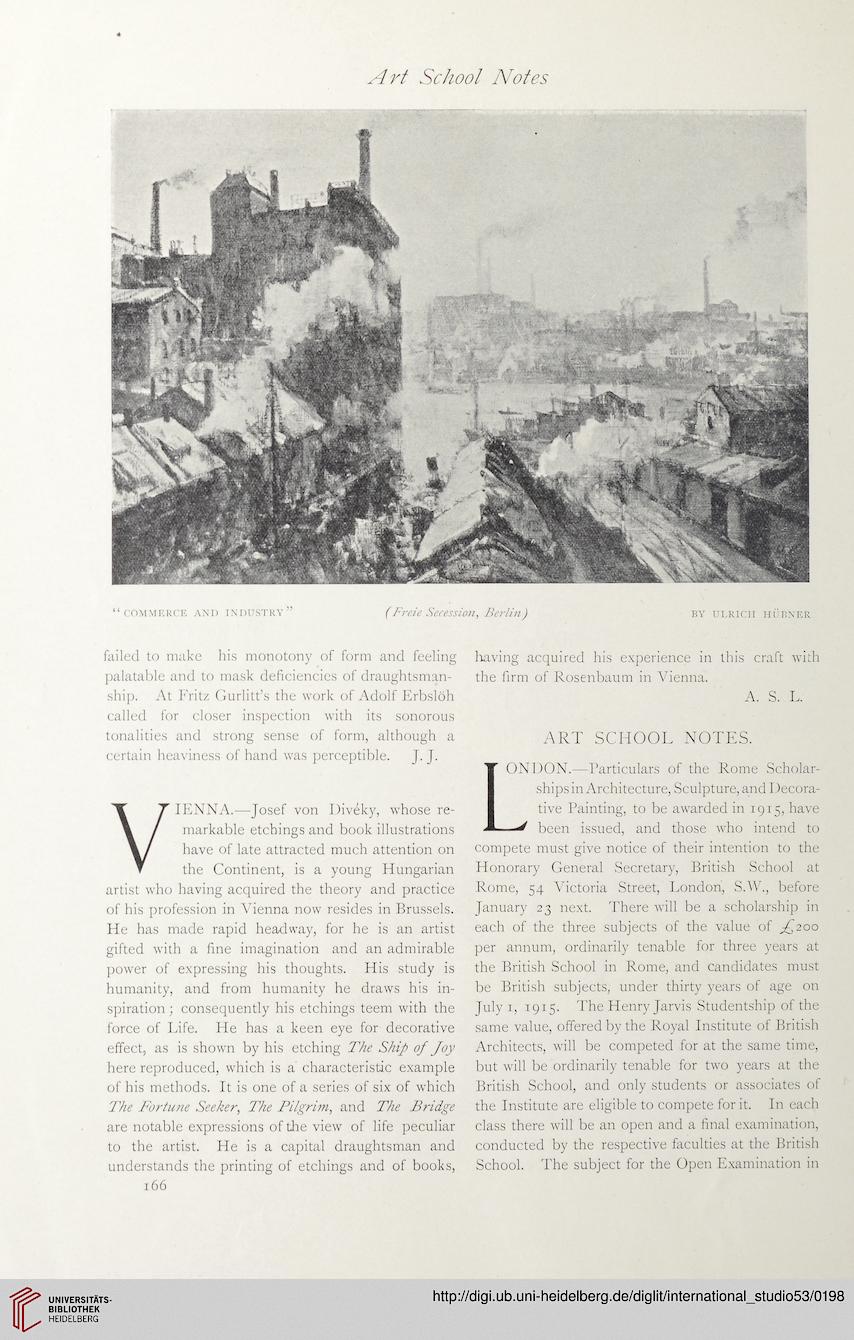 failed to make his monotony of form and feeling
palatable and to mask deficiencies of draughtsman-
ship. At Fritz Gurlitt’s the work of Adolf Erbsloh
called for closer inspection with its sonorous
tonalities and strong sense of form, although a
certain heaviness of hand was perceptible. J. J.
VIENNA.—Josef von Diveky, whose re-
markable etchings and book illustrations
have of late attracted much attention on
the Continent, is a young Hungarian
artist who having acquired the theory and practice
of his profession in Vienna now resides in Brussels.
He has made rapid headway, for he is an artist
gifted with a fine imagination and an admirable
power of expressing his thoughts. His study is
humanity, and from humanity he draws his in-
spiration; consequently his etchings teem with the
force of Life. He has a keen eye for decorative
effect, as is shown by his etching The Ship of Joy
here reproduced, which is a characteristic example
of his methods. It is one of a series of six of which
The Fortune Seeker, The Pilgrim, and The Bridge
are notable expressions of the view of life peculiar
to the artist. He is a capital draughtsman and
understands the printing of etchings and of books,
166

liaving acquired his experience in this craft with
the firm of Rosenbaum in Vienna.
A. S. L.
ART SCHOOL NOTES.
tON DON.—Particulars of the Rome Scholar-
ships in Architecture, Sculpture, and 1 )ecora-
tive Painting, to be awarded in 1915, have
—d been issued, and those who intend to
compete must give notice of their intention to the
Honorary General Secretary, British School at
Rome, 54 Victoria Street, London, S.W., before
January 23 next. There will be a scholarship in
each of the three subjects of the value of A'200
per annum, ordinarily tenable for three years at
the British School in Rome, and candidates must
be British subjects, under thirty years of age on
July 1, 1915. The Henry Jarvis Studentship of the
same value, offered by the Royal Institute of British
Architects, will be competed for at the same time,
but will be ordinarily tenable for two years at the
British School, and only students or associates of
the Institute are eligible to compete for it. In each
class there will be an open and a final examination,
conducted by the respective faculties at the British
School. The subject for the Open Examination in