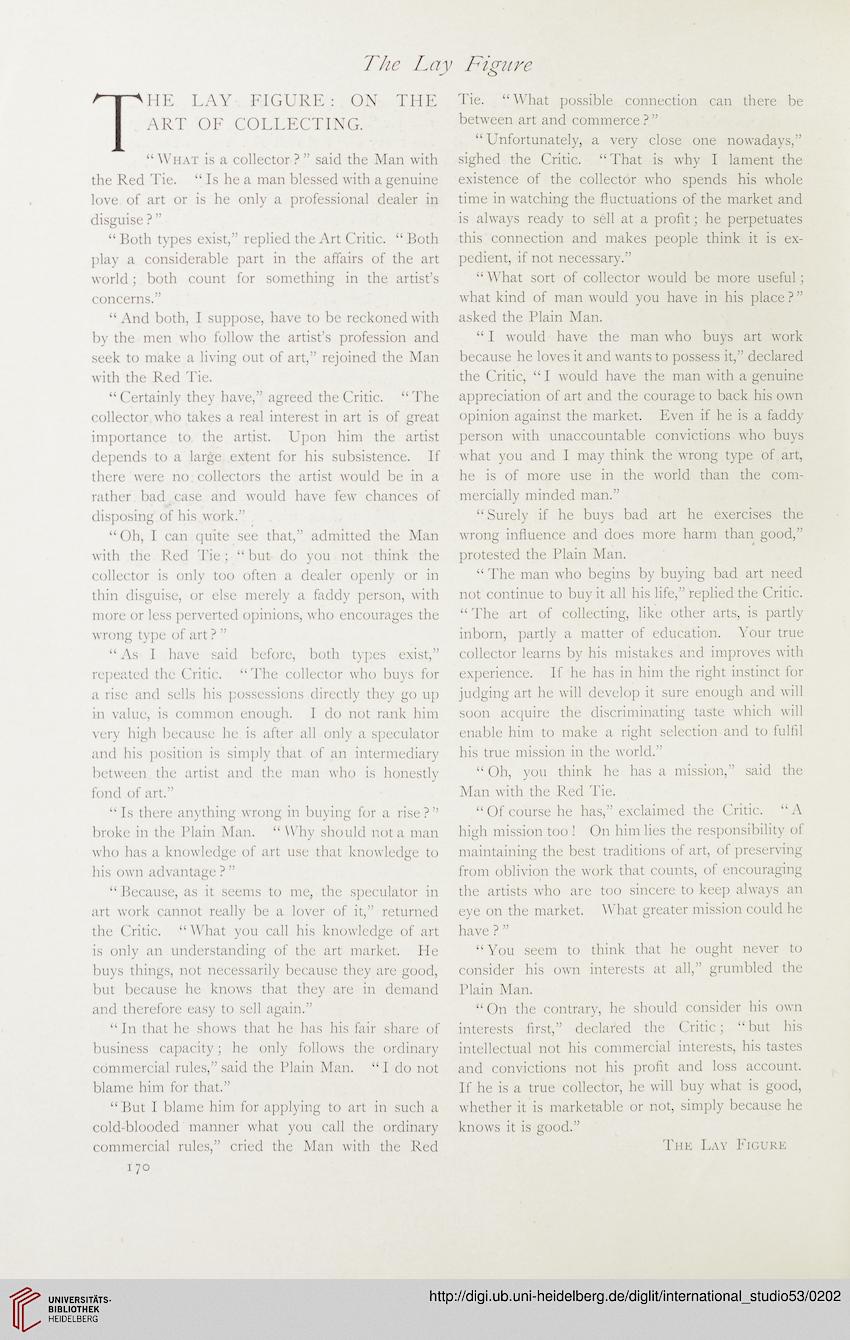 The lay figure : on the
ART OF COLLECTING.
“ What is a collector ? ” said the Man with
the Red Tie. “ Is he a man blessed with a genuine
love of art or is he only a professional dealer in
disguise ? ”
“ Both types exist,” replied the Art Critic. “ Both
play a considerable part in the affairs of the art
world; both count for something in the artist’s
concerns.”
“ And both, I suppose, have to be reckoned with
by the men who follow the artist’s profession and
seek to make a living out of art,” rejoined the Man
with the Red Tie.
“ Certainly they have,” agreed the Critic. “ The
collector who takes a real interest in art is of great
importance to the artist. Upon him the artist
depends to a large extent for his subsistence. If
there were no collectors the artist would be in a
rather bad case and would have few chances of
disposing of his work.”
“ Oh, I can quite see that,” admitted the Man
with the Red Tie; “ but do you not think the
collector is only too often a dealer openly or in
thin disguise, or else merely a faddy person, with
more or less perverted opinions, who encourages the
wrong type of art ? ”
“ As I have said before, both types exist,”
repeated the Critic. “The collector who buys for
a rise and sells his possessions directly they go up
in value, is common enough. I do not rank him
very high because he is after all only a speculator
and his position is simply that of an intermediary
between the artist and the man who is honestly
fond of art.”
“ Is there anything wrong in buying for a rise ? ”
broke in the Plain Man. “ Why should not a man
who has a knowledge of art use that knowledge to
his own advantage ? ”
“ Because, as it seems to me, the speculator in
art work cannot really be a lover of it,” returned
the Critic. “ What you call his knowledge of art
is only an understanding of the art market. He
buys things, not necessarily because they are good,
but because he knows that they are in demand
and therefore easy to sell again.”
“ In that he shows that he has his fair share of
business capacity; he only follows the ordinary
commercial rules,” said the Plain Man. “ I do not
blame him for that.”
“But I blame him for applying to art in such a
cold-blooded manner what you call the ordinary
commercial rules,” cried the Man with the Red
Uo

Tie. “ What possible connection can there be
between art and commerce ? ”
“ Unfortunately, a very close one nowadays,”
sighed the Critic. “ That is why I lament the
existence of the collector who spends his whole
time in watching the fluctuations of the market and
is always ready to sell at a profit; he perpetuates
this connection and makes people think it is ex-
pedient, if not necessary.”
“ What sort of collector would be more useful;
what kind of man would you have in his place ? ”
asked the Plain Man.
“ I would have the man who buys art work
because he loves it and wants to possess it,” declared
the Critic, “ I would have the man with a genuine
appreciation of art and the courage to back his own
opinion against the market. Even if he is a faddy
person with unaccountable convictions who buys
what you and I may think the wrong type of art,
he is of more use in the world than the com-
mercially minded man.”
“ Surely if he buys bad art he exercises the
wrong influence and does more harm than good,”
protested the Plain Man.
“ The man who begins by buying bad art need
not continue to buy it all his life,” replied the Critic.
“ The art of collecting, like other arts, is partly
inborn, partly a matter of education. Your true
collector learns by his mistakes and improves with
experience. If he has in him the right instinct for
judging art he will develop it sure enough and will
soon acquire the discriminating taste which will
enable him to make a right selection and to fulfil
his true mission in the world.”
“ Oh, you think he has a mission,” said the
Man with the Red Tie.
“Of course he has,” exclaimed the Critic. “A
high mission too ! On him lies the responsibility of
maintaining the best traditions of art, of preserving
from oblivion the work that counts, of encouraging
the artists who are too sincere to keep always an
eye on the market. What greater mission could he
have ? ”
“ You seem to think that he ought never to
consider his own interests at all,” grumbled the
Plain Man.
“ On the contrary, he should consider his own
interests first,” declared the Critic; “but his
intellectual not his commercial interests, his tastes
and convictions not his profit and loss account.
If he is a true collector, he will buy what is good,
whether it is marketable or not, simply because he
knows it is good.”