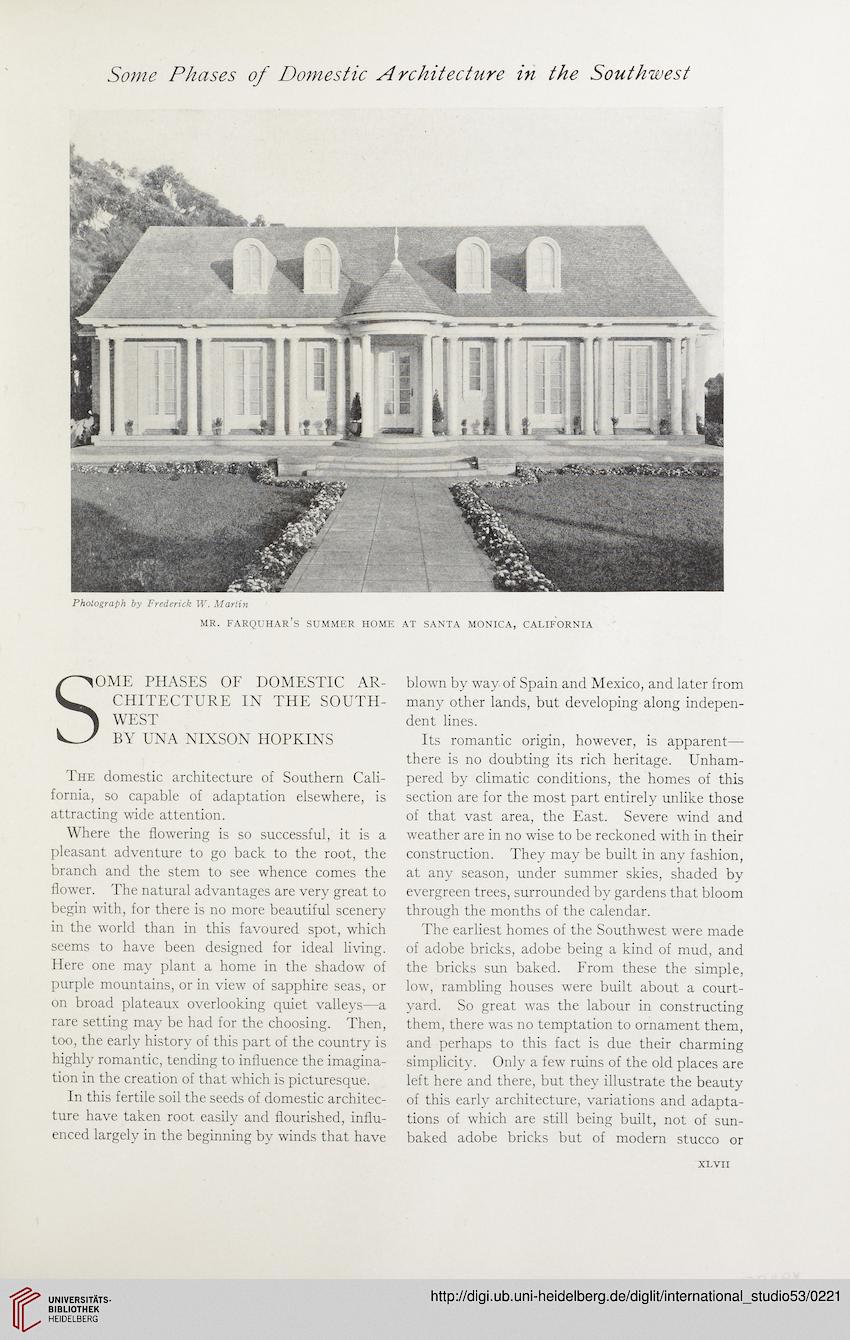 SOME PHASES OF DOMESTIC AR-
CHITECTURE IN THE SOUTH-
| WEST
F BY UNA NIXSON HOPKINS
The domestic architecture of Southern Cali-
fornia, so capable of adaptation elsewhere, is
attracting wide attention.
Where the flowering is so successful, it is a
pleasant adventure to go back to the root, the
branch and the stem to see whence comes the
flower. The natural advantages are very great to
begin with, for there is no more beautiful scenery
in the world than in this favoured spot, which
seems to have been designed for ideal living.
Here one may plant a home in the shadow of
purple mountains, or in view of sapphire seas, or
on broad plateaux overlooking quiet valleys—a
rare setting may be had for the choosing. Then,
too, the early history of this part of the country is
highly romantic, tending to influence the imagina-
tion in the creation of that which is picturesque.
In this fertile soil the seeds of domestic architec-
ture have taken root easily and flourished, influ-
enced largely in the beginning by winds that have

blown by way of Spain and Mexico, and later from
many other lands, but developing along indepen-
dent lines.
Its romantic origin, however, is apparent—
there is no doubting its rich heritage. Unham-
pered by climatic conditions, the homes of this
section are for the most part entirely unlike those
of that vast area, the East. Severe wind and
weather are in no wise to be reckoned with in their
construction. They may be built in any fashion,
at any season, under summer skies, shaded by
evergreen trees, surrounded by gardens that bloom
through the months of the calendar.
The earliest homes of the Southwest were made
of adobe bricks, adobe being a kind of mud, and
the bricks sun baked. From these the simple,
low, rambling houses were built about a court-
yard. So great was the labour in constructing
them, there was no temptation to ornament them,
and perhaps to this fact is due their charming
simplicity. Only a few ruins of the old places are
left here and there, but they illustrate the beauty
of this early architecture, variations and adapta-
tions of which are still being built, not of sun-
baked adobe bricks but of modern stucco or