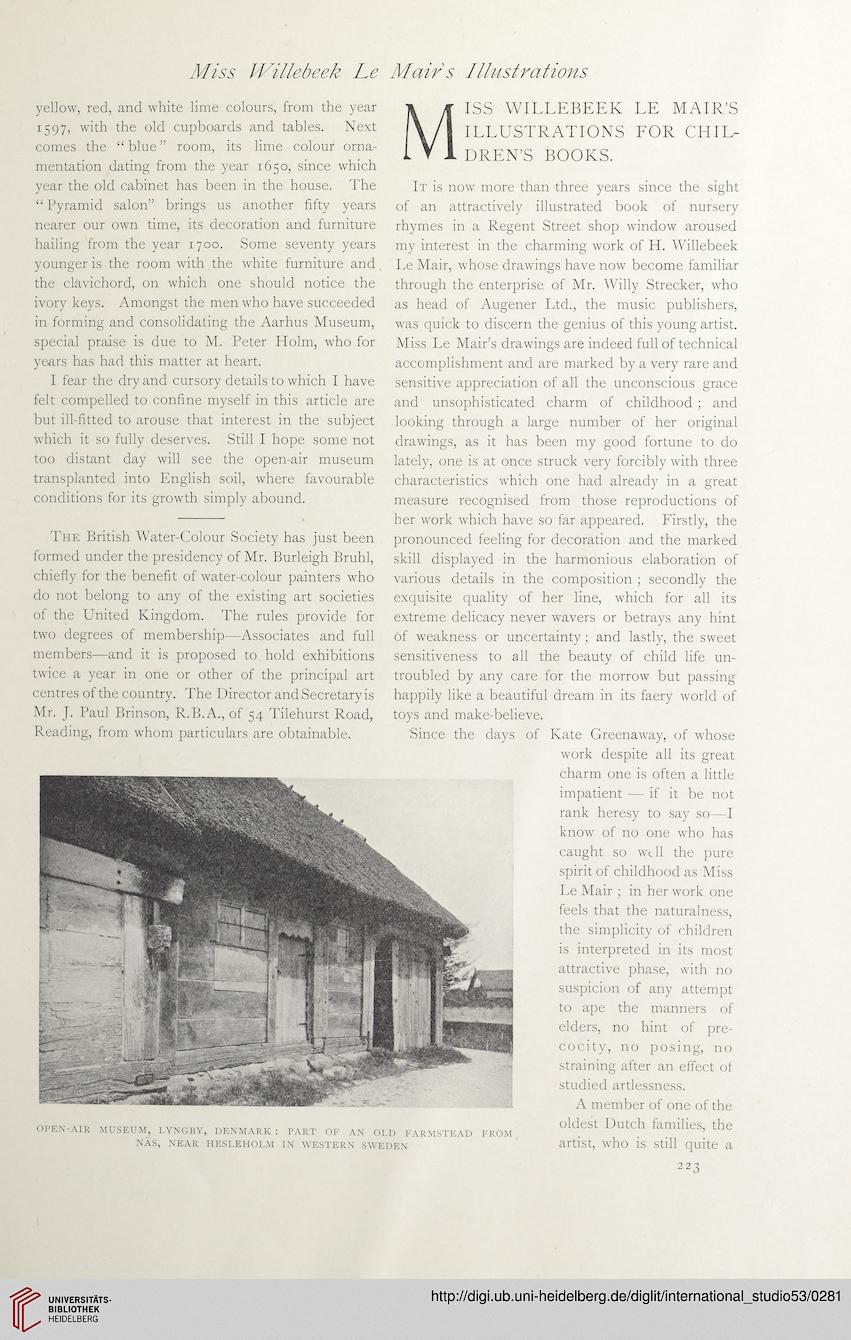 yellow, red, and white lime colours, from the year
1597, with the old cupboards and tables. Next
comes the “blue” room, its lime colour orna-
mentation dating from the year 1650, since which
year the old cabinet has been in the house. The
“Pyramid salon” brings us another fifty years
nearer our own time, its decoration and furniture
hailing from the year 1700. Some seventy years
younger is the room with the white furniture and
the clavichord, on which one should notice the
ivory keys. Amongst the men who have succeeded
in forming and consolidating the Aarhus Museum,
special praise is due to M. Peter Holm, who for
years has had this matter at heart.
I fear the dry and cursory details to which I have
felt compelled to confine myself in this article are
but ill-fitted to arouse that interest in the subject
which it so fully deserves. Still I hope some not
too distant day will see the open-air museum
transplanted into English soil, where favourable
conditions for its growth simply abound.
The British Water-Colour Society has just been
formed under the presidency of Mr. Burleigh Bruhl,
chiefly for the benefit of water-colour painters who
do not belong to any of the existing art societies
of the United Kingdom. The rules provide for
two degrees of membership—Associates and full
members—and it is proposed to hold exhibitions
twice a year in one or other of the principal art
centres of the country. The Director and Secretary is
Mr. J. Paul Brinson, R.B.A., of 54 Tilehurst Road,
Reading, from whom particulars are obtainable.

MISS WILLEBEEK LE MAIR’S
ILLUSTRATIONS FOR CHIL-
DREN’S BOOKS.
It is now more than three years since the sight
of an attractively illustrated book of nursery
rhymes in a Regent Street shop window aroused
my interest in the charming work of H. Willebeek
Le Mair, whose drawings have now become familiar
through the enterprise of Mr. Willy Strecker, who
as head of Augener Ltd., the music publishers,
was quick to discern the genius of this young artist.
Miss Le Mair’s drawings are indeed full of technical
accomplishment and are marked by a very rare and
sensitive appreciation of all the unconscious grace
and unsophisticated charm of childhood ; and
looking through a large number of her original
drawings, as it has been my good fortune to do
lately, one is at once struck very forcibly with three
characteristics which one had already in a great
measure recognised from those reproductions of
her work which have so far appeared. Firstly, the
pronounced feeling for decoration and the marked
skill displayed in the harmonious elaboration of
various details in the composition ; secondly the
exquisite quality of her line, which for all its
extreme delicacy never wavers or betrays any hint
of weakness or uncertainty; and lastly, the sweet
sensitiveness to all the beauty of child life un-
troubled by any care for the morrow but passing
happily like a beautiful dream in its faery world of
toys and make-believe.
Since the days of Kate Greenaway, of whose
work despite all its great
charm one is often a little
impatient — if it be not
rank heresy to say so—I
know of no one who has
caught so well the pure
spirit of childhood as Miss
Le Mair ; in her work one
feels that the naturalness,
the simplicity of children
is interpreted in its most
attractive phase, with no
suspicion of any attempt
to ape the manners of
elders, no hint of pre-
cocity, no posing, no
straining after an effect of
studied artlessness.
A member of one of the
oldest Dutch families, the
artist, who is still quite a


OPEN-AIR MUSEUM, LYNGBY, DENMARK : PART OF AN OLD FARMSTEAD FROM
NAS, NEAR HESLEHOLM IN WESTERN SWEDEN