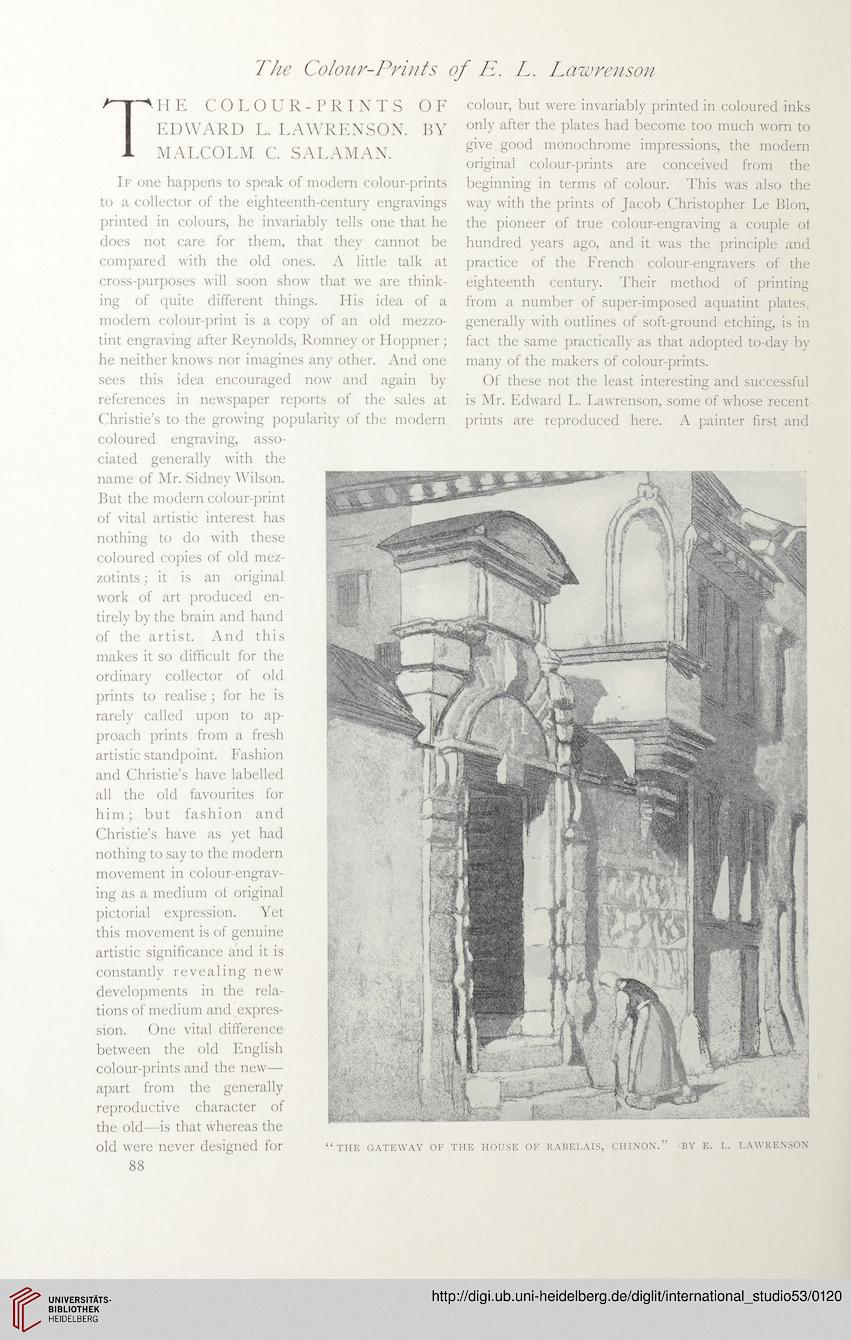 Information about OCR text
The Colour-Prints of E. L. Lawrenson

The co lour-prints of
EDWARD L. LAWRENSON. BY
MALCOLM C. SALAMAN.
If one happens to speak of modern colour-prints
to a collector of the eighteenth-century engravings
printed in colours, he invariably tells one that he
does not care for them, that they cannot be
compared with the old ones. A little talk at
cross-purposes will soon show that we are think-
ing of quite different things. His idea of a
modern colour-print is a copy of an old mezzo-
tint engraving after Reynolds, Romney or Hoppner ;
he neither knows nor imagines any other. And one
sees this idea encouraged now and again by
references in newspaper reports of the sales at
Christie’s to the growing popularity of the modern
coloured engraving, asso¬
ciated generally with the
name of Mr. Sidney Wilson.
But the modern colour-print
of vital artistic interest has
nothing to do with these
coloured copies of old mez-
zotints ; it is an original
work of art produced en-
tirely by the brain and hand
of the artist. And this
makes it so difficult for the
ordinary collector of old
prints to realise ; for he is
rarely called upon to ap-
proach prints from a fresh
artistic standpoint. Fashion
and Christie’s have labelled
all the old favourites for
him; but fashion and
Christie’s have as yet had
nothing to say to the modern
movement in colour-engrav-
ing as a medium of original
pictorial expression. Yet
this movement is of genuine
artistic significance and it is
constantly revealing new
developments in the rela-
tions of medium and expres¬
sion. One vital difference
between the old English
colour-prints and the new—
apart from the generally
reproductive character of
the old—is that whereas the
old were never designed for

colour, but were invariably printed in coloured inks
only after the plates had become too much worn to
give good monochrome impressions, the modern
original colour-prints are conceived from the
beginning in terms of colour. This was also the
way with the prints of Jacob Christopher Le Bion,
the pioneer of true colour-engraving a couple of
hundred years ago, and it was the principle and
practice of the French colour-engravers of the
eighteenth century. Their method of printing
from a number of super-imposed aquatint plates,
generally with outlines of soft-ground etching, is in
fact the same practically as that adopted to-day by
many of the makers of colour-prints.
Of these not the least interesting and successful
is Mr. Edward L. Lawrenson, some of whose recent
prints are reproduced here. A painter first and