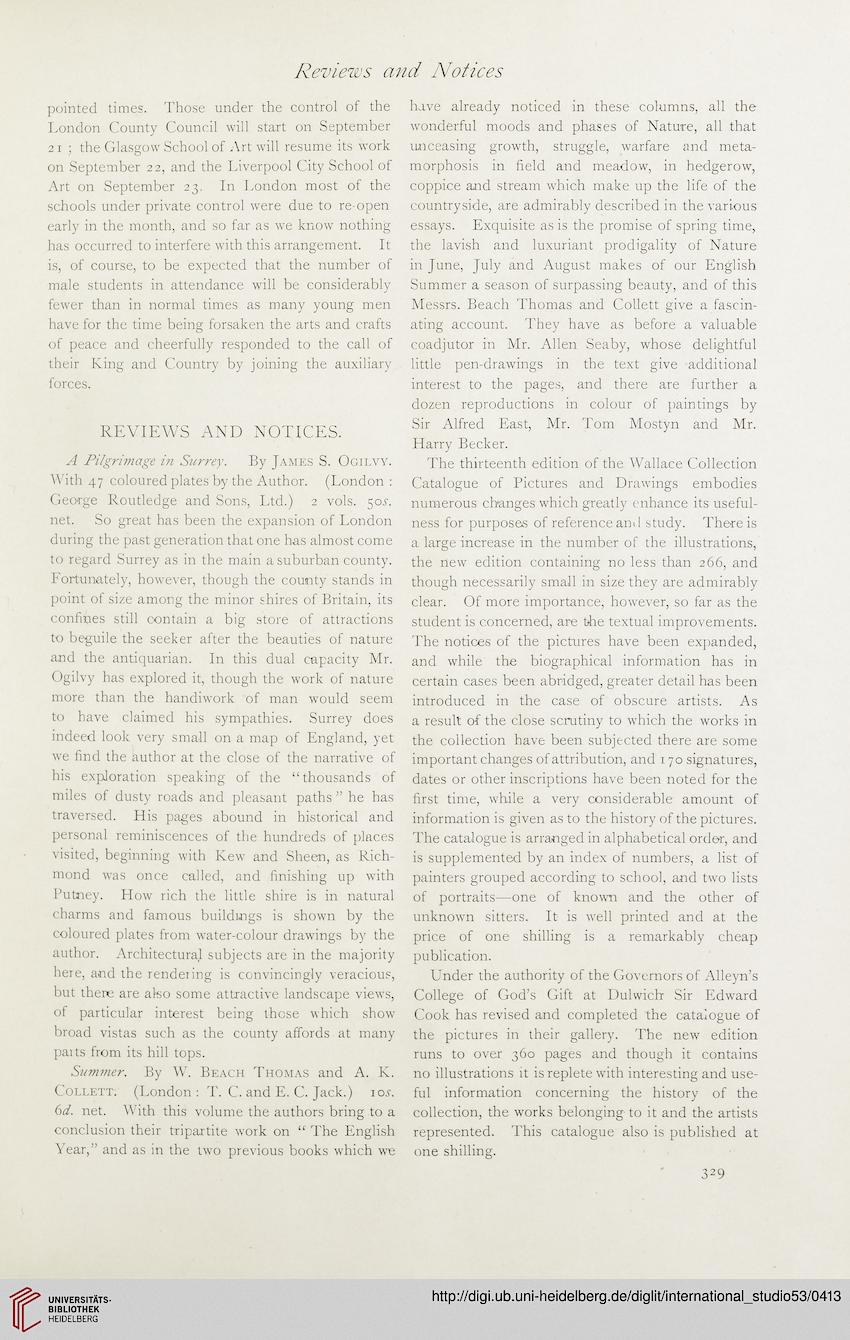 pointed times. Those under the control of the
London County Council will start on September
21 ; the Glasgow School of Art will resume its work
on September 22, and the Liverpool City School of
Art on September 23, In London most of the
schools under private control were due to re-open
early in the month, and so far as we know nothing
has occurred to interfere with this arrangement. It
is, of course, to be expected that the number of
male students in attendance will be considerably
fewer than in normal times as many young men
have for the time being forsaken the arts and crafts
of peace and cheerfully responded to the call of
their King and Country by joining the auxiliary
forces.
REVIEWS AND NOTICES.
A Pilgrimage in Surrey. By James S. Ogilvy.
With 47 coloured plates by the Author. (London :
George Routledge and Sons, Ltd.) 2 vols. 505.
net. So great has been the expansion of London
during the past generation that one has almost come
to regard Surrey as in the main a suburban county.
Fortunately, however, though the county stands in
point of size among the minor shires of Britain, its
confines still contain a big store of attractions
to beguile the seeker after the beauties of nature
and the antiquarian. In this dual capacity Mr.
Ogilvy has explored it, though the work of nature
more than the handiwork of man would seem
to have claimed his sympathies. Surrey does
indeed look very small on a map of England, yet
we find the author at the close of the narrative of
his exploration speaking of the “thousands of
miles of dusty roads and pleasant paths ” he has
traversed. His pages abound in historical and
personal reminiscences of the hundreds of places
visited, beginning with Kew and Sheen, as Rich-
mond was once called, and finishing up with
Putney. How rich the little shire is in natural
charms and famous buildings is shown by the
coloured plates from water-colour drawings by the
author. Architectural subjects are in the majority
here, and the rendering is convincingly veracious,
but there are also some attractive landscape views,
of particular interest being those which show
broad vistas such as the county affords at many
paits from its hill tops.
Summer. By W. Beach Thomas and A. K.
Collett. (London: T. C. and E. C. Jack.) ioj.
6Y. net. With this volume the authors bring to a
conclusion their tripartite work on “ The English
Year,” and as in the two previous books which we

have already noticed in these columns, all the
wonderful moods and phases of Nature, all that
unceasing growth, struggle, warfare and meta-
morphosis in field and meadow, in hedgerow,
coppice and stream which make up the life of the
countryside, are admirably described in the various
essays. Exquisite as is the promise of spring time,
the lavish and luxuriant prodigality of Nature
in June, July and August makes of our English
Summer a season of surpassing beauty, and of this
Messrs. Beach Thomas and Collett give a fascin-
ating account. They have as before a valuable
coadjutor in Mr. Allen Seaby, whose delightful
little pen-drawings in the text give additional
interest to the pages, and there are further a
dozen reproductions in colour of paintings by
Sir Alfred East, Mr. Tom Mostyn and Mr.
Harry Becker.
The thirteenth edition of the Wallace Collection
Catalogue of Pictures and Drawings embodies
numerous changes which greatly enhance its useful-
ness for purposes of reference and study. There is
a large increase in the number of the illustrations,
the new edition containing no less than 266, and
though necessarily small in size they are admirably
clear. Of more importance, however, so far as the
student is concerned, are the textual improvements.
The notices of the pictures have been expanded,
and while the biographical information has in
certain cases been abridged, greater detail has been
introduced in the case of obscure artists. As
a result of the close scrutiny to which the works in
the collection have been subjected there are some
important changes of attribution, and 170 signatures,
dates or other inscriptions have been noted for the
first time, while a very considerable amount of
information is given as to the history of the pictures.
The catalogue is arranged in alphabetical order, and
is supplemented by an index of numbers, a list of
painters grouped according to school, and two lists
of portraits—one of known and the other of
unknown sitters. It is well printed and at the
price of one shilling is a remarkably cheap
publication.
Under the authority of the Governors of Alleyn’s
College of God’s Gift at Dulwich Sir Edward
Cook has revised and completed the catalogue of
the pictures in their gallery. The new edition
runs to over 360 pages and though it contains
no illustrations it is replete with interesting and use-
ful information concerning the history of the
collection, the works belonging to it and the artists
represented. This catalogue also is published at
one shilling.
329