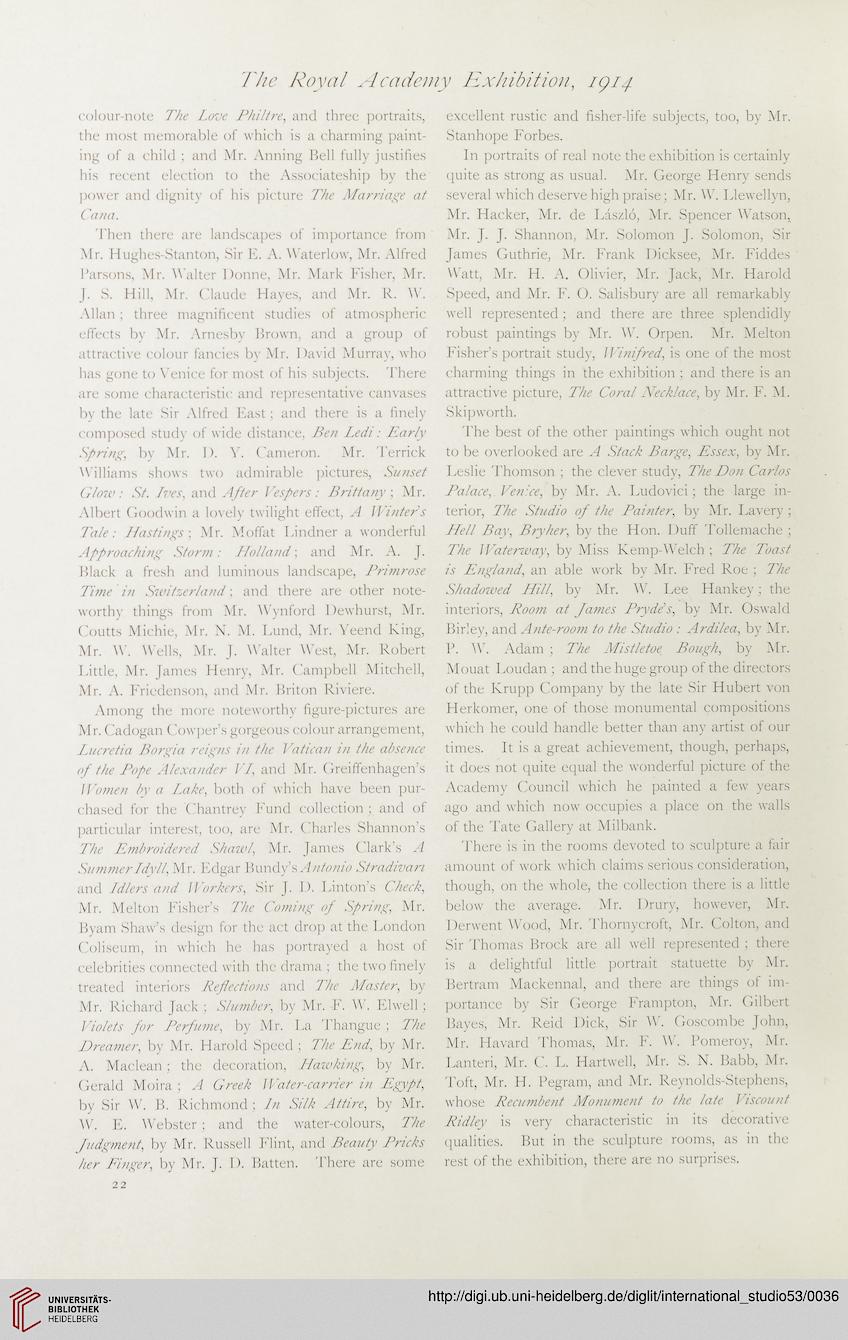 colour-note The Love Philtre, and three portraits,
the most memorable of which is a charming paint-
ing of a child ; and Mr. Anning Bell fully justifies
his recent election to the Associateship by the
power and dignity of his picture The Marriage at
Cana.
Then there are landscapes of importance from
Mr. Hughes-Stanton, Sir E. A. Waterlow, Mr. Alfred
Parsons, Mr. Walter Donne, Mr. Mark Fisher, Mr.
J. S. Hill, Mr. Claude Hayes, and Mr. R. AV.
Allan ; three magnificent studies of atmospheric
effects by Mr. Arnesby Brown, and a group of
attractive colour fancies by Mr. David Murray, who
has gone to Venice for most of his subjects. There
are some characteristic and representative canvases
by the late Sir Alfred East; and there is a finely
composed study of wide distance, Ben Ledi: Early
Spring, by Mr. 1). Y. Cameron. Mr. Terrick
Williams shows two admirable pictures, Sunset
Glow: St. Ives, and After Vespers: Brittany ; Mr.
Albert Goodwin a lovely twilight effect, A Winter’s
Tale: Hastings', Mr. Moffat Eindner a wonderful
Approaching Storm: Holland; and Mr. A. J.
Black a fresh and luminous landscape, Primrose
Time in Switzerland; and there are other note-
worthy things from Mr. Wynford Dewhurst, Mr.
Coutts Michie, Mr. N. M. Fund, Mr. Yeend King,
Mr. W. Wells, Mr. J. Walter West, Mr. Robert
Little, Mr. James Henry, Mr. Campbell Mitchell,
Mr. A. Fricdenson, and Mr. Briton Riviere.
Among the more noteworthy figure-pictures are
Mr. Cadogan Cowper’s gorgeous colour arrangement,
Lucretia Borgia reigns in the Vatican in the absence
of the Pope Alexander VI, and Mr. Greiffenhagen’s
Women by a Lake, both of which have been pur-
chased for the Chantrey Fund collection ; and of
particular interest, too, are Mr. Charles Shannon’s
The Embroidered Shawl, Mr. James Clark’s A
Summer Idyll, Mr. Edgar Bundy’s Antonio Stradivari
and Idlers and Workers, Sir J. D. Linton’s Check,
Mr. Melton Fisher’s The Coming of Spring, Mr.
Byam Shaw’s design for the act drop at the London
Coliseum, in which he has portrayed a host of
celebrities connected with the drama ; the two finely
treated interiors Reflections and The Master, by
Mr. Richard Jack ; Slumber, by Mr. F. W. Elwell;
Violets for Perfume, by Mr. La Thangue ; The
Dreamer, by Mr. Harold Speed ; The End, by Mr.
A. Maclean ; the decoration, Hawking, by Mr.
Gerald Moira ; A Greek Water-carrier in Egypt,
by Sir AV. B. Richmond ; 7/z Silk Attire, by Mr.
AV. E. Webster ; and the water-colours, The
fudgment, by Mr. Russell Flint, and Beauty Pricks
her Finger, by Mr. J. I). Batten. There are some

excellent rustic and fisher-life subjects, too, by Mr.
Stanhope Forbes.
In portraits of real note the exhibition is certainly
quite as strong as usual. Mr. George Henry sends
several which deserve high praise; Mr. W. Llewellyn,
Mr. Hacker, Mr. de Laszlo, Mr. Spencer AA7atson,
Mr. J. J. Shannon, Mr. Solomon J. Solomon, Sir
James Guthrie, Mr. Frank Dicksee, Mr. Fiddes
A A att, Mr. H. A. Olivier, Mr. Jack, Mr. Harold
Speed, and Mr. F. O. Salisbury are all remarkably
well represented ; and there are three splendidly
robust paintings by Mr. AV. Orpen. Mr. Melton
Fisher’s portrait study, Winifred, is one of the most
charming things in the exhibition ; and there is an
attractive picture, The Coral Necklace, by Mr. F. M.
Skipworth.
The best of the other paintings which ought not
to be overlooked are A Stack Barge, Essex, by Mr.
Leslie Thomson ; the clever study, The Don Carlos
Palace, Venice, by Mr. A. Ludovici; the large in-
terior, The Studio of the Painter, by Mr. Lavery ;
Hell Bay, Bryher, by the Hon. Duff Tollemache ;
The Waterway, by Miss Kemp-AVelch ; The Toast
is England, an able work by Mr. Fred Roe ; The
Shadowed Hill, by Mr. AV. Lee Hankey; the
interiors, Room at fames Pryde’s, by Mr. Oswald
Bir'.ey, and Ante-room to the Studio : Ardilea, by Mr.
P. AA7. Adam ; The Mistletoe Bough, by Mr.
Mouat Loudan ; and the huge group of the directors
of the Krupp Company by the late Sir Hubert von
Herkomer, one of those monumental compositions
which he could handle better than any artist of our
times. It is a great achievement, though, perhaps,
it does not quite equal the wonderful picture of the
Academy Council which he painted a few years
ago and which now occupies a place on the walls
of the date Gallery at Milbank.
d’here is in the rooms devoted to sculpture a fair
amount of work which claims serious consideration,
though, on the whole, the collection there is a little
below the average. Mr. Drury, however, Mr.
Derwent AVood, Mr. Thornycroft, Mr. Colton, and
Sir d'homas Brock are all well represented ; there
is a delightful little portrait statuette by Mr.
Bertram Mackennal, and there are things of im-
portance by Sir George Frampton, Mr. Gilbert
Bayes, Mr. Reid Dick, Sir AA7. Goscombe John,
Mr. Havard d'homas, Mr. F. AV. Pomeroy, Mr.
Lanteri, Mr. C. L. Hartwell, Mr. S. N. Babb, Mr.
d'oft, Mr. H. Pegram, and Mr. Reynolds-Stephens,
whose Recumbent Monument to the late Viscount
Ridley is very characteristic in its decorative
qualities. But in the sculpture rooms, as in the
rest of the exhibition, there are no surprises.