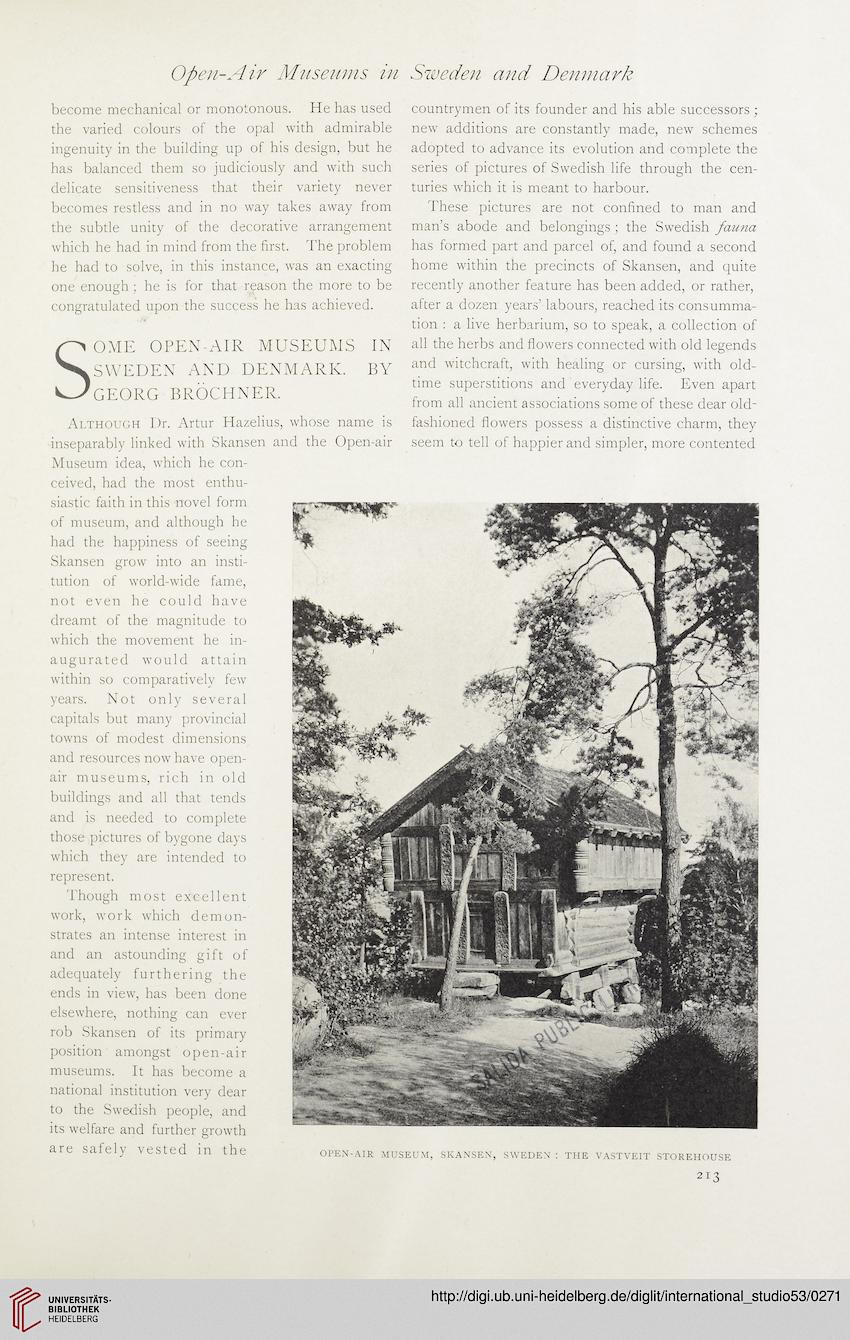 become mechanical or monotonous. He has used
the varied colours of the opal with admirable
ingenuity in the building up of his design, but he
has balanced them so judiciously and with such
delicate sensitiveness that their variety never
becomes restless and in no way takes away from
the subtle unity of the decorative arrangement
which he had in mind from the first. The problem
he had to solve, in this instance, was an exacting
one enough ; he is for that reason the more to be
congratulated upon the success he has achieved.
OME OPEN-AIR MUSEUMS IN
SWEDEN AND DENMARK. BY
GEORG BROCHNER.
Although Dr. Artur Hazelius, whose name is
inseparably linked with Skansen and the Open-air
Museum idea, which he con¬
ceived, had the most enthu¬
siastic faith in this novel form
of museum, and although he
had the happiness of seeing
Skansen grow into an insti-
tution of world-wide fame,
not even he could have
dreamt of the magnitude to
which the movement he in¬
augurated would attain
within so comparatively few
years. Not only several
capitals but many provincial
towns of modest dimensions
and resources now have open-
air museums, rich in old
buildings and all that tends
and is needed to complete
those pictures of bygone days
which they are intended to
represent.
Though most excellent
work, work which demon¬
strates an intense interest in
and an astounding gift of
adequately furthering the
ends in view, has been done
elsewhere, nothing can ever
rob Skansen of its primary
position amongst open-air
museums. It has become a
national institution very dear
to the Swedish people, and
its welfare and further growth
are safely vested in the

countrymen of its founder and his able successors ;
new additions are constantly made, new schemes
adopted to advance its evolution and complete the
series of pictures of Swedish life through the cen-
turies which it is meant to harbour.
These pictures are not confined to man and
man’s abode and belongings ; the Swedish fauna
has formed part and parcel of, and found a second
home within the precincts of Skansen, and quite
recently another feature has been added, or rather,
after a dozen years’ labours, reached its consumma-
tion : a live herbarium, so to speak, a collection of
all the herbs and flowers connected with old legends
and witchcraft, with healing or cursing, with old-
time superstitions and everyday life. Even apart
from all ancient associations some of these dear old-
fashioned flowers possess a distinctive charm, they
seem to tell of happier and simpler, more contented