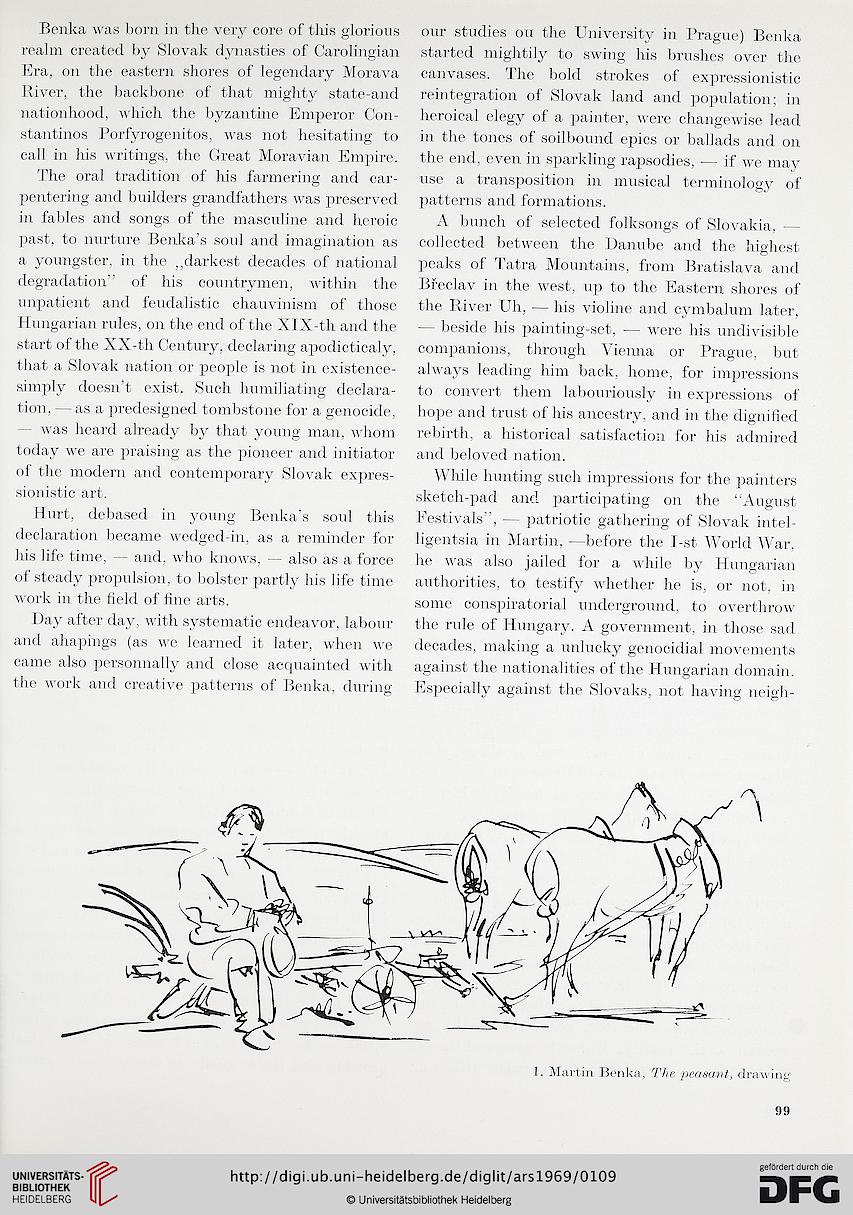 Information about OCR text
Benka was born in the very core of this glorious
realm created by Slovák dynasties of Carolingian
Era, on the eastern shores of legendary Morava
River, the backbone of that mightv state-and
nationhood, which the byzantine Emperor Con-
stantinos Porfyrogenitos, was not hesitating to
call in his writings, the Great Moravian Empire.
The oral tradition of his farmering and car-
pentering and bnilders grandfathers was preserved
in fables and songs of the mascnline and heroic
past, to nurture Benka's soul and imagination as
a youngster, in the ,,darkest decades of national
dégradation" of his countrymen, within the
impatient and feudalistic chauvinism of those
Hungarian rules, on the end of the XIX-th and the
start of the XX-th Century, declaring apodicticaly,
that a Slovák nation or people is not in existence-
simply doesn't exist. Such humiliating déclara-
tion, — as a predesigned tombstone for a genocidě,
- was heard already by that young man, whom
today we are praising as the pioneer and initiator
of the modem and Contemporary Slovák expres-
sionistic art.
Hurt, debased in young Benka's soul this
déclaration became wedged-in, as a reminder for
his !ife time, — and, who knows, — also as a force
of steady propulsion, to bolster partly his life time
work in the held of hne arts.
Day after day, with systematic endeavor, labour
and ahapings (as we learned it later, when we
came also personnally and close acquainted with
the work and créative patterns of Benka, during

our studies on the University in Prague) Benka
started mightily to swing his brushes over the
canvases. The bold strokes of expressionistic
réintégration of Slovák land and population; in
heroical elegy of a painter, were changewise lead
in the toneš of soilbound epics or ballads and on
the end, even in sparkling rapsodies, — if we may
use a transposition in musical terminology of
patterns and formations.
A bunch of selected folksongs of Slovakia, —
collected between the Danube and the highest
peaks of Tatra Mountains, from Bratislava and
Břeclav in the west, up to the Eastern shores of
the River Uh, -— his violině and cymbalum later,
— beside his painting-set, — were his undivisible
compactions, through Vienna or Prague, but
always leading him back, home, for impressions
to couvert them labouriously in expressions of
hope and trust of his ancestry, and in the dignihed
rebirth, a historical satisfaction for his admired
and beloved nation.
While hunting such impressions for the painters
sketch-pad and participating on the "August
Festivals", — patriotic gathering of Slovák intel-
ligentsia in Martin, —before the 1-st World War,
he was also jailed for a while by Hungarian
authorities, to testify whether he is, or not, in
some conspiratorial underground., to overthrow
the rule of Hungary. A government, in those sad
decades, making a unlucky genocidial movements
against the nationalities of the Hungarian domain.
Especially against the Slovaks, not having neigh-