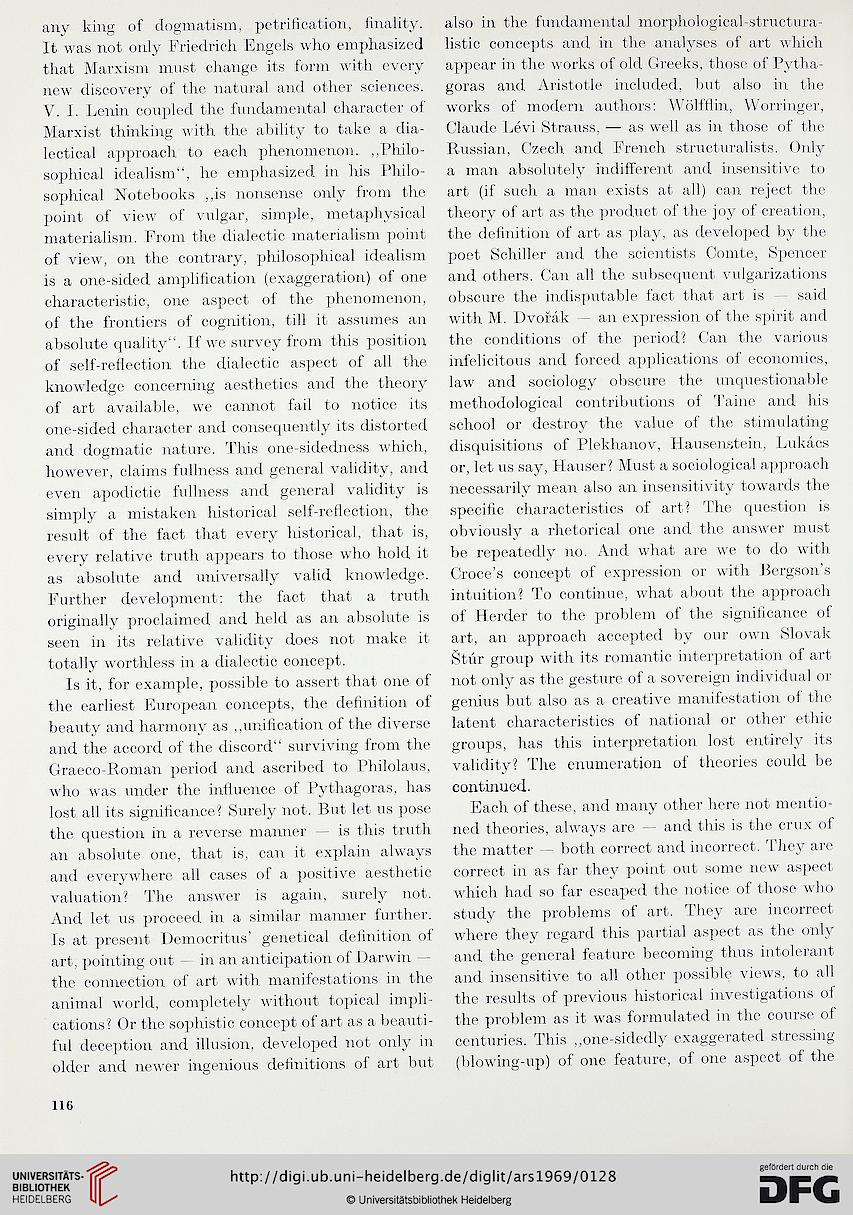 Information about OCR text
any king of dogmatism, pétrification, knality.
It was not only Friedrich Engels who emphasized
that Marxism must change its form with every
new discovery of the natural and other sciences.
V. I. Lenin coupled the fundamental character of
Marxist thinking with the ability to také a dia-
lectical approach to each phenomenon. ,,Philo-
sophical idealism", he emphasized in his Philo-
sophical Notebooks ,,is nonsense only from the
point of view of vulgär, simple, metaphysical
materialism. From the dialectic materialism point
of view, on the contrary, philosophical idealism
is a one-sided amplification (exaggeration) of one
characteristic, one aspect of the phenomenon,
of the frontiers of cognition, till it assumes an
absolute quality". If we survey from this position
of self-rehection the dialectic aspect of ail the
knowledge concerning aesthetics and the theory
of art available, we cannot fail to notice its
one-sided character and consequently its distorted
and dogmatic nature. This one-sidedness which,
however, daims fullness and general validity, and
even apodictic fullness and general validity is
simply a mistaken historical self-rehection, the
resuit of the fact that every historical, that is,
every relative truth appears to those who hold it
as absolute and universally valid knowledge.
Further development: the fact that a truth
originally proclaimed and held as an absolute is
seen in its relative validity does not make it
totally worthless in a dialectic concept.
Is it, for example, possible to assert that one of
the earliest European concepts, the définition of
beauty and harmony as ,,unification of the diverse
and the accord of the discorď' surviving from the
Graeco-Roman period and ascribed to Philolaus,
who was under the influence of Pythagoras, has
lost all its signihcance? Surely not. But let us pose
the question in a reverse mamier — is this truth
an absolute one, that is, can it explain always
and everywhere ail cases of a positive aesthetic
valuation? The answer is again, surely not.
And let us proceed in a similar manner further.
Is at present Democritus' genetical définition of
art, pointing out — in an anticipation of Darwin —
the connection of art with manifestations in the
animal world, completely without topical impli-
cations? Or the sophistic concept of art as a beauti-
ful déception and illusion, developed not only in
older and newer ingenious définitions of art but

also in the fundamental morphological structura-
liste concepts and in the analyses of art which
appear in the works of old Greeks, those of Pytha-
goras and Aristotle included, but also in the
works of modem authors: Wölfhin, Worringer,
Claude Lévi Strauss, — as well as in those of the
Russian, Czech and French structuralists. Only
a man absolutely indifferent and insensitive to
art (if such a man exists at ail) can reject the
theory of art as the product of the joy of création,
the définition of art as play, as developed by the
poet Schiller and the scientists Comte, Spencer
and others. Can ail the subséquent vulgarizations
obscure the indisputable fact that art is said
with M. Dvořák — an expression of the spirit and
the conditions of the period? Can the various
infelicitous and forced applications of économies,
law and sociology obscure the unquestionable
methodological contributions of Taine and his
school or destroy the value of the stimulating
disquisitions of Plekhanov, Hausenstein, Lukács
or, let us say, Hauser? Must a sociological approach
necessarily mean also an insensitivity towards the
specihc characteristics of art? The question is
obviously a rhetorical one and the answer must
be repeatedly no. And what are we to do with
Croce's concept of expression or with Bergson's
intuition? To continue, what about the approach
of Herder to the problém of the signihcance of
art, an approach accepted by our own Slovák
Štúr group with its romantic interprétation of art
not only as the gesture of a sovereign individual or
genius but also as a créative manifestation of the
latent characteristics of national or other ethic
groups, has this interprétation lost entirely its
validity? The énumération of théories could be
continued.
Each of these, and many other here not mentio-
ned théories, always are — and this is the crux of
the matter — both correct and incorrect. They are
correct in as far they point out some new aspect
which had so far escaped the notice of those who
study the problems of art. They are incorrect
where they regard this partial aspect as the only
and the general feature becoming thus intolerant
and insensitive to ail other possible views, to ail
the results of previous historical investigations of
the problém as it was formulated in the course of
centuries. This ,,one-sidedly exaggerated stressing
(blowing-up) of one feature, of one aspect of the