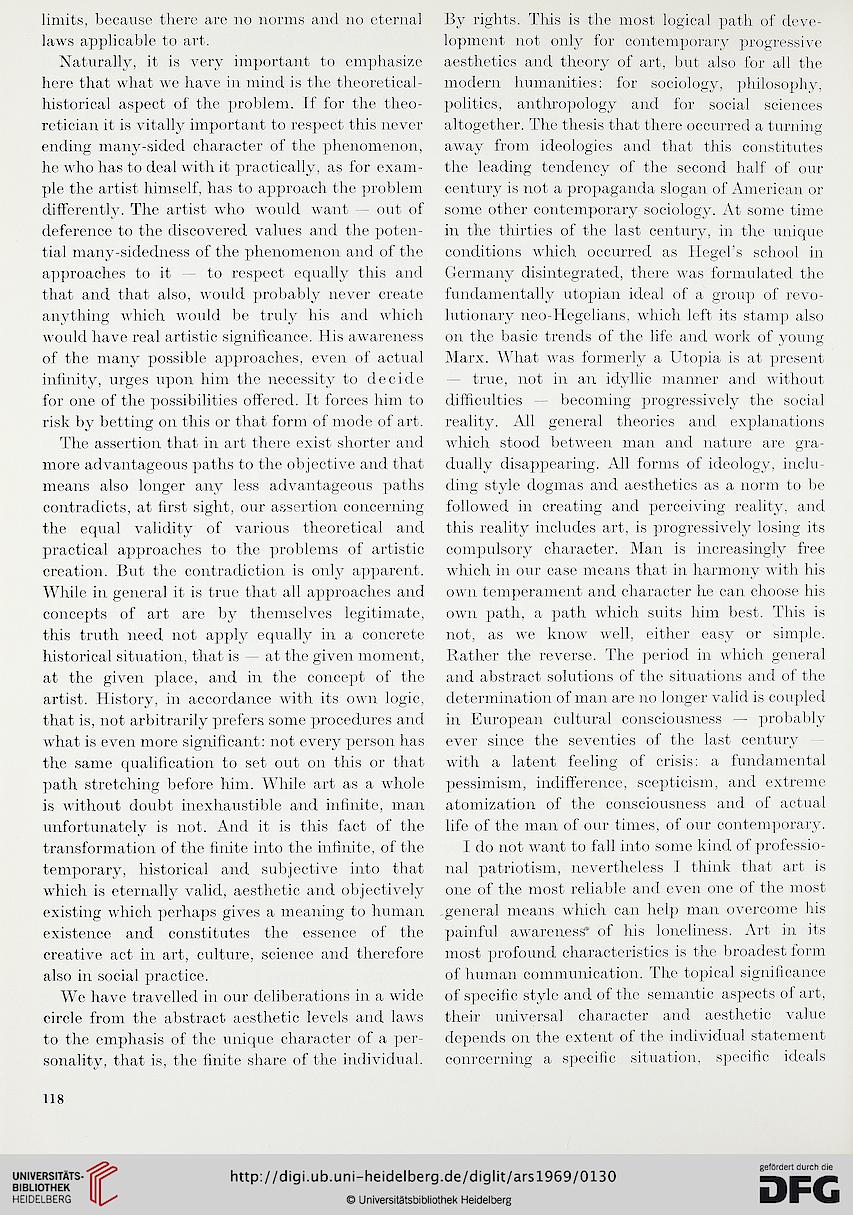 Information about OCR text
limits, because there are no norms and no eternal
laws applicable to art.
Natnrally, it is very important to emphasize
here that what we háve in mind is the theoretical-
historical aspect of the problém. If tor the theo-
retician it is vitally important to respect this never
ending many-sided character of the phenomenon,
he who has to deal with it practically, as for exam-
ple the artist himself, has to approach the problém
diíferently. The artist who would want — out of
deference to the discovered values and the poten-
tial many-sidedness of the phenomenon and of the
approaches to it — to respect equally this and
that and that also, would probably never create
anything which would be truly his and which
would háve real artistic signihcance. His awareness
of the many possible approaches, even of actual
inhnity, urges upon him the necessity to décidé
for one of the possibilités oífered. It forces him to
risk by betting on this or that form of mode of art.
The assertion that in art there exist shorter and
more advantageous paths to the objective and that
means also longer any less advantageous paths
contradicts, at hrst sight, our asseidion concerning
the equal validity of various theoretical and
practical approaches to the problems of artistic
création. But the contradiction is only apparent.
While in general it is trne that all approaches and
concepts of art are by themselves legitimate,
this truth need not apply equally in a concrète
historical situation, that is — at the given moment,
at the given place, and in the concept of the
artist. History, in accordance with its own logic,
that is, not arbitrarily prefers some procedures and
what is even more signihcant : not every person has
the same qualification to set out on this or that
path stretching before him. While art as a whole
is without doubt inexhaustiblc and inimité, man
unfortunately is not. And it is this fact of the
transformation of the hnité into the inimité, of the
temporary, historical and subjective into that
which is eternally valid, aesthetic and objectively
existing which perhaps gives a meaning to human
existence and constitutes the essence of the
créative act in art, culture, science and therefore
also in social practice.
We hâve travelled in our deliberations in a wide
circle from the abstract aesthetic levels and laws
to the emphasis of the unique character of a per-
sonality, that is, the hnite share of the individual.

By rights. This is the most logical path of deve-
lopment not only for Contemporary progressive
aesthetics and theory of art, but also for ail the
modem humanités: for sociology, philosophy,
politics, anthropology and for social sciences
altogether. The thesis that there occurred a turning
away from idéologies and that this constitutes
the leading tendency of the second half of our
Century is not a propaganda slogan of American or
some other Contemporary sociology. At some time
in the thirties of the last Century, in the unique
conditions which occurred as Hegehs school in
Germany disintegrated, there was formulated the
fundamentally utopian ideal of a group of revo-
lutionary neo-Hegelians, which left its starnp also
on the basic trends of the life and work of young
Marx. What was formerly a Utopia is at present
- true, not in an idyllic manner and without
difficultés — becoming progressively the social
reality. All general theories and explanations
which stood between man and nature are gra-
dually disappearing. Ail forms of ideology, inclu-
ding style dogmas and aesthetics as a norm to be
followed in creating and perceiving reality, and
tins reality includes art, is progressively losing its
compulsory character. Man is increasingly free
which in our case means that in harmony with his
own temperament and character he can choose his
own path, a path which suits him best. This is
not, as we know well, either easy or simple.
Rather the reverse. The period in which general
and abstract solutions of the situations and of the
détermination of man are no longer valid is coupled
in European cultural consciousness — probably
ever since the seventies of the last Century —
with a latent feeling of crisis: a fundamental
pessimism, indifférence, scepticism, and extreme
atomization of the consciousness and of actual
life of the man of our times, of our contemporary.
I do not want to fall into some kind of Professio-
nal patriotism, nevertheless I think that art is
one of the most reliable and even one of the most
general means which can help man overcome his
painful awareness' of Iris loneliness. Art in its
most profound characteristics is the broadest form
of human communication. The topical signihcance
of spécifie style and of the semantic aspects of art,
their universal character and aesthetic value
dépends on the extent of the individual statement
conrcerning a specific situation, specific ideals