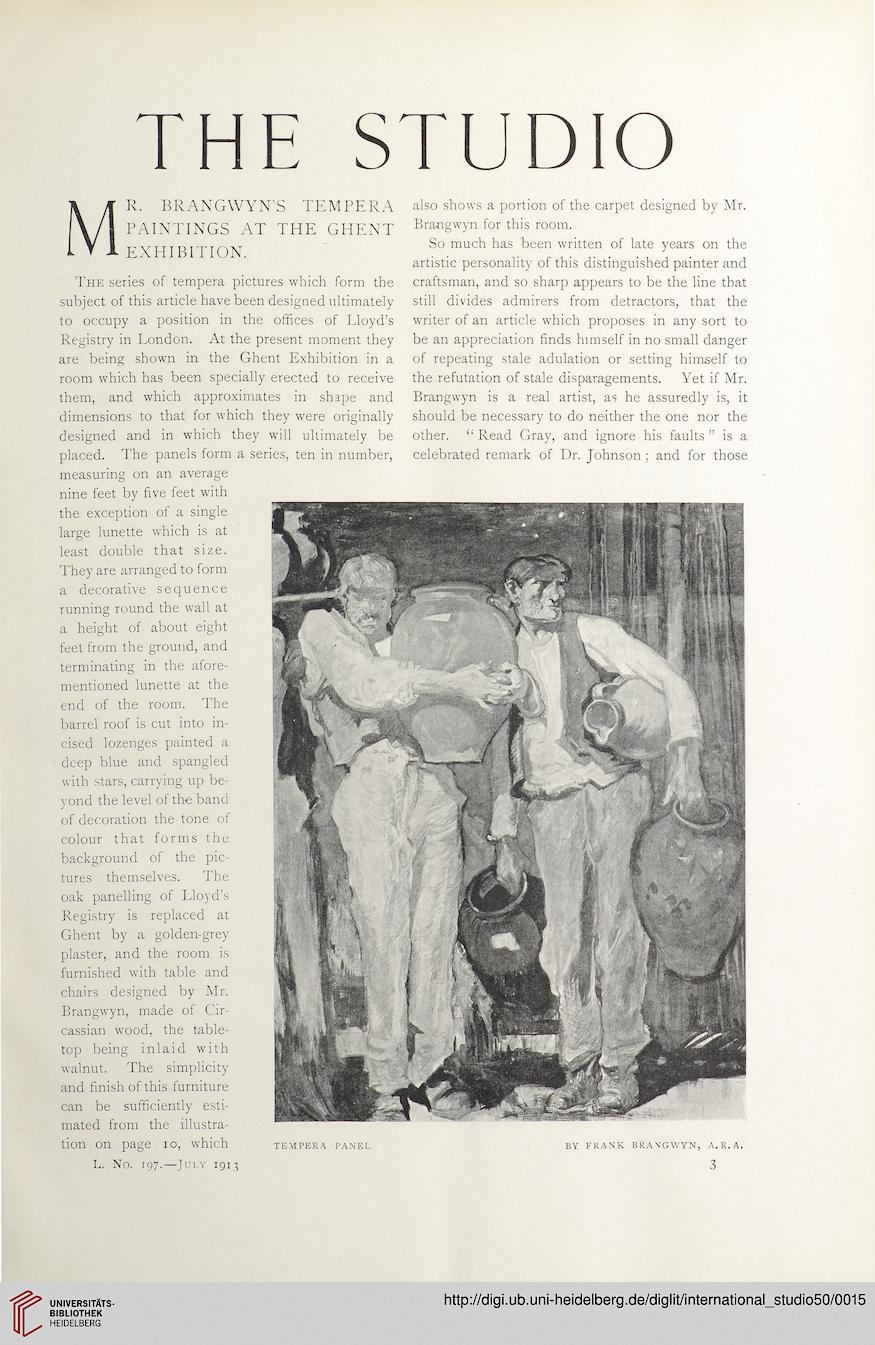 Mr. brangwyn’s tempera
PAINTINGS AT THE GHENT
EXHIBITION.
The series of tempera pictures which form the
subject of this article have been designed ultimately
to occupy a position in the offices of Lloyd’s
Registry in London. At the present moment they
are being shown in the Ghent Exhibition in a
room which has been specially erected to receive
them, and which approximates in shape and
dimensions to that for which they were originally
designed and in which they will ultimately be
placed. The panels form a series, ten in number,
measuring on an average
nine feet by five feet with
the exception of a single
large lunette which is at
least double that size.
They are arranged to form
a decorative sequence
running round the wall at
a height of about eight
feet from the ground, and
terminating in the afore¬
mentioned lunette at the
end of the room. The
barrel roof is cut into in¬
cised lozenges painted a
deep blue and spangled
with stars, carrying up be¬
yond the level of the band
of decoration the tone of
colour that forms the
background of the pic¬
tures themselves. The
oak panelling of Lloyd’s
Registry is replaced at
Ghent by a golden-grey
plaster, and the room is
furnished with table and
chairs designed by Mr.
Brangwyn, made of Cir¬
cassian wood, the table-
top being inlaid with
walnut. The simplicity
and finish of this furniture
can be sufficiently esti¬
mated from the illustra¬
tion on page i o, which
L. No. 197.—July 1913

also shows a portion of the carpet designed by Mr.
Brangwyn for this room.
So much has been written of late years on the
artistic personality of this distinguished painter and
craftsman, and so sharp appears to be the line that
still divides admirers from detractors, that the
writer of an article which proposes in any sort to
be an appreciation finds himself in no small danger
of repeating stale adulation or setting himself to
the refutation of stale disparagements. Yet if Mr.
Brangwyn is a real artist, as he assuredly is, it
should be necessary to do neither the one nor the
other. “Read Gray, and ignore his faults” is a
celebrated remark of Dr. Johnson; and for those