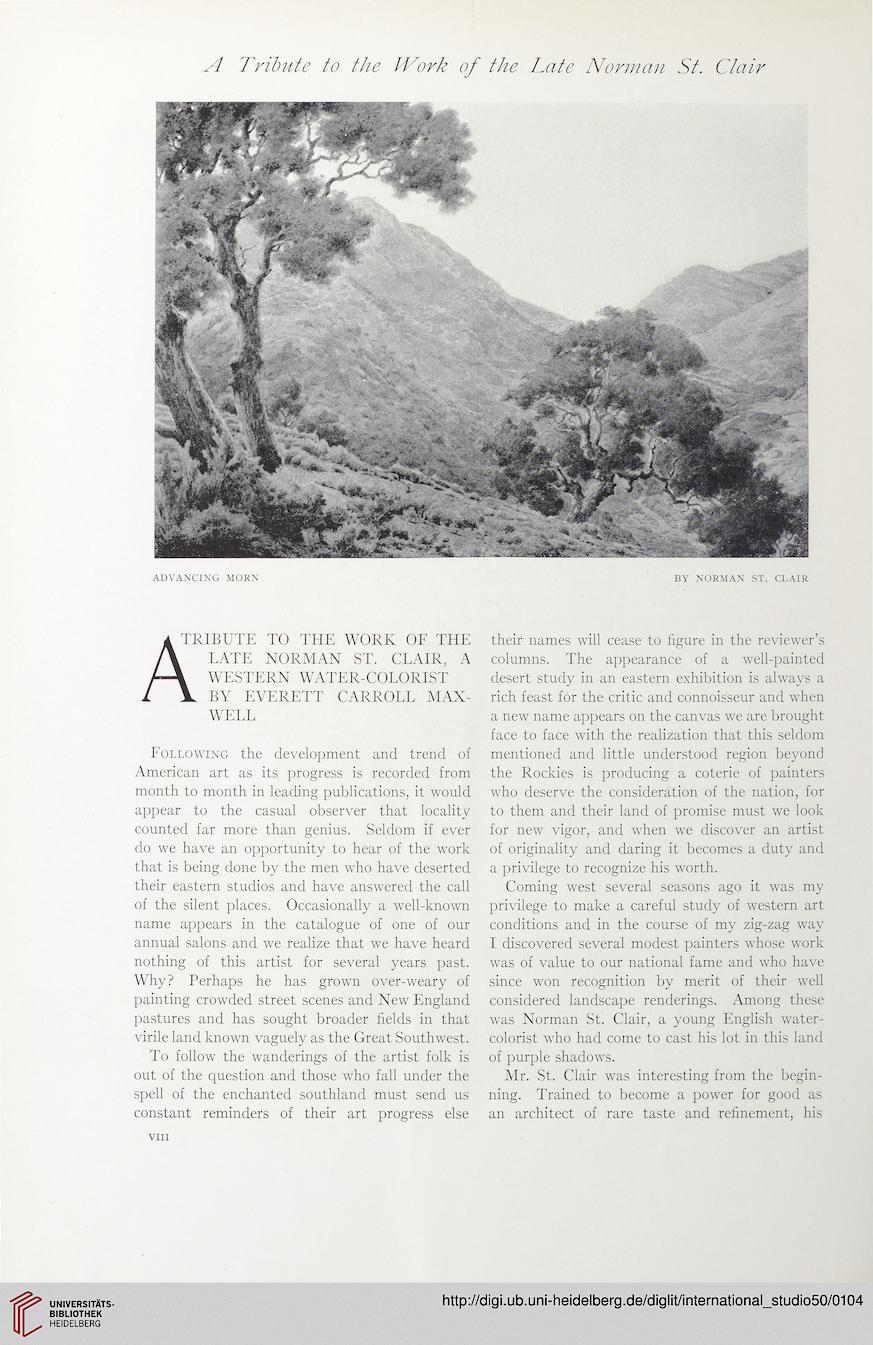 Information about OCR text
A Tribute to the Work of the Late Norman St. Ctair


A TRIBUTE TO THE WORK OF THE
/\ LATE NORMAN ST. CLAIR, A
Z-A WESTERN WATER-COLORIST
L V BY EVERETT CARROLL MAX-
WELL
Following the development and trend of
American art as its progress is recorded from
month to month in leading publications, it would
appear to the casual observer that locality
counted far more than genius. Seldom if ever
do we have an opportunity to hear of the work
that is being done by the men who have deserted
their eastern studios and have answered the call
of the silent places. Occasionally a well-known
name appears in the catalogue of one of our
annual salons and we realize that we have heard
nothing of this artist for several years past.
Why? Perhaps he has grown over-weary of
painting crowded street scenes and New England
pastures and has sought broader fields in that
virile land known vaguely as the Great Southwest.
To follow the wanderings of the artist folk is
out of the question and those who fall under the
spell of the enchanted southland must send us
constant reminders of their art progress else

their names will cease to figure in the reviewer’s
columns. The appearance of a well-painted
desert study in an eastern exhibition is always a
rich feast for the critic and connoisseur and when
a new name appears on the canvas we are brought
face to face with the realization that this seldom
mentioned and little understood region beyond
the Rockies is producing a coterie of painters
who deserve the consideration of the nation, for
to them and their land of promise must we look
for new vigor, and when we discover an artist
of originality and daring it becomes a duty and
a privilege to recognize his worth.
Coming west several seasons ago it was my
privilege to make a careful study of western art
conditions and in the course of my zig-zag way
I discovered several modest painters whose work
was of value to our national fame and who have
since won recognition by merit of their well
considered landscape renderings. Among these
was Norman St. Clair, a young English water-
colorist who had come to cast his lot in this land
of purple shadows.
Mr. St. Clair was interesting from the begin-
ning. Trained to become a power for good as
an architect of rare taste and refinement, his