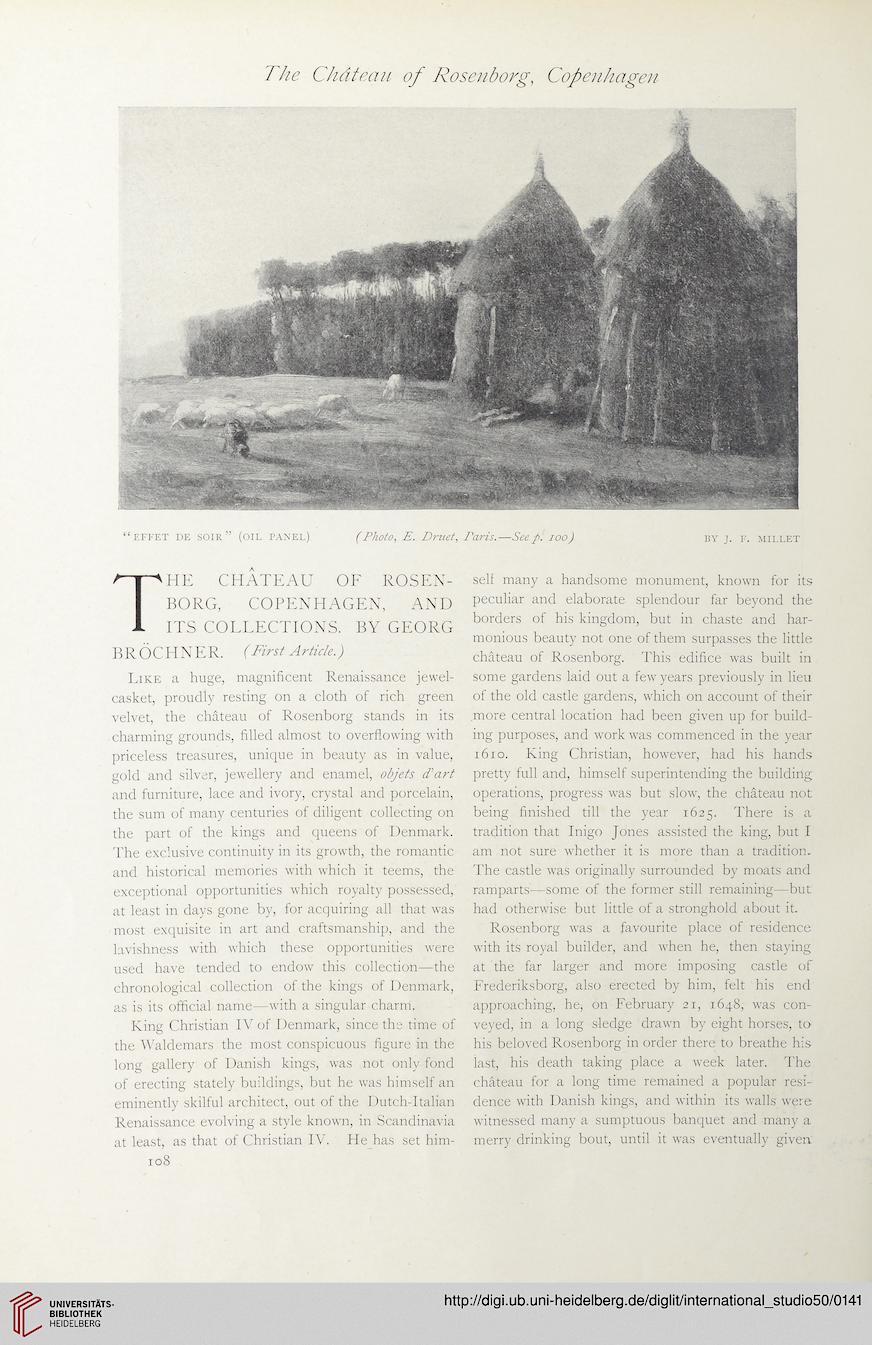 Information about OCR text
The Chateau of Rosenborg, Copenhagen

The chateau of rosen-
BORG, COPENHAGEN, AND
ITS COLLECTIONS. BY GEORG
BROCHNER. (First Article.)
Like a huge, magnificent Renaissance jewel-
casket, proudly resting on a cloth of rich green
velvet, the chateau of Rosenborg stands in its
charming grounds, filled almost to overflowing with
priceless treasures, unique in beauty as in value,
gold and silver, jewellery and enamel, objets d'art
and furniture, lace and ivory, crystal and porcelain,
the sum of many centuries of diligent collecting on
the part of the kings and queens of Denmark.
The exclusive continuity in its growth, the romantic
and historical memories with which it teems, the
exceptional opportunities which royalty possessed,
at least in days gone by, for acquiring all that was
most exquisite in art and craftsmanship, and the
lavishness with which these opportunities were
used have tended to endow this collection—the
chronological collection of the kings of Denmark,
as is its official name—with a singular charm.
King Christian IV of Denmark, since the time of
the Waldemars the most conspicuous figure in the
long gallery of Danish kings, was not only fond
of erecting stately buildings, but he was himself an
eminently skilful architect, out of the Dutch-Italian
Renaissance evolving a style known, in Scandinavia
at least, as that of Christian IV. He has set him-
108

self many a handsome monument, known for its
peculiar and elaborate splendour far beyond the
borders of his kingdom, but in chaste and har-
monious beauty not one of them surpasses the little
chateau of Rosenborg. This edifice was built in
some gardens laid out a few years previously in lieu
of the old castle gardens, which on account of their
more central location had been given up for build-
ing purposes, and work was commenced in the year
16io. King Christian, however, had his hands
pretty full and, himself superintending the building
operations, progress was but slow, the chateau not
being finished till the year 1625. There is a
tradition that Inigo Jones assisted the king, but I
am not sure whether it is more than a tradition.
The castle was originally surrounded by moats and
ramparts—some of the former still remaining—but
had otherwise but little of a stronghold about it.
Rosenborg was a favourite place of residence
with its royal builder, and when he, then staying
at the far larger and more imposing castle of
Frederiksborg, also erected by him, felt his end
approaching, he, on February 21, 1648, was con-
veyed, in a long sledge drawn by eight horses, to
his beloved Rosenborg in order there to breathe his
last, his death taking place a week later. The
chateau for a long time remained a popular resi-
dence with Danish kings, and within its walls were
witnessed many a sumptuous banquet and many a
merry drinking bout, until it was eventually given