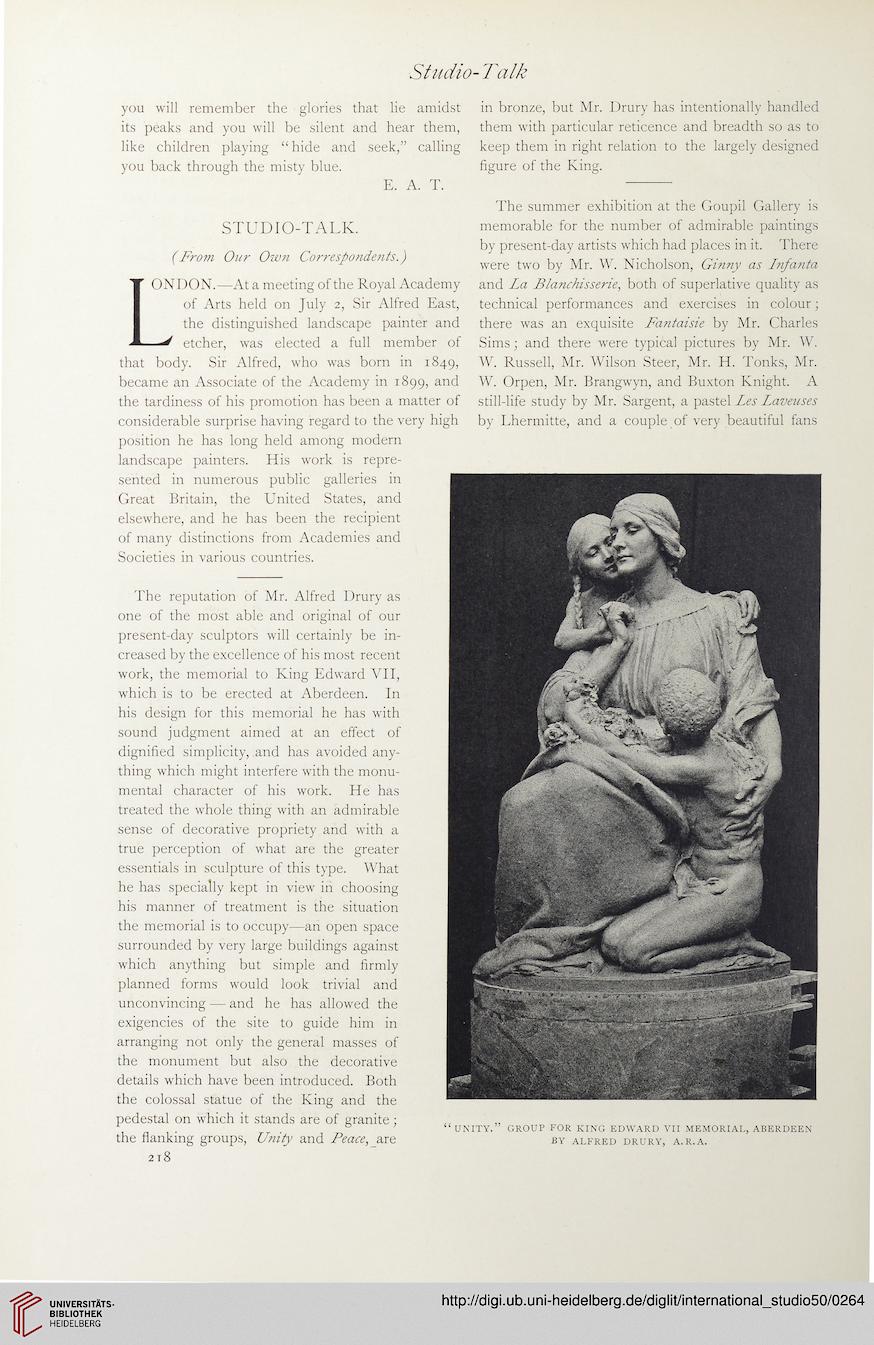 you will remember the glories that lie amidst
its peaks and you will be silent and hear them,
like children playing “ hide and seek,” calling
you back through the misty blue.
E. A. T.

in bronze, but Mr. Drury has intentionally handled
them with particular reticence and breadth so as to
keep them in right relation to the largely designed
figure of the King.

LONDON.—At a meeting of the Royal Academy
of Arts held on July 2, Sir Alfred East,
the distinguished landscape painter and
etcher, was elected a full member of
that body. Sir Alfred, who was born in 1849,
became an Associate of the Academy in 1899, and
the tardiness of his promotion has been a matter of
considerable surprise having regard to the very high

The summer exhibition at the Goupil Gallery is
memorable for the number of admirable paintings
by present-day artists which had places in it. There
were two by Mr. W. Nicholson, Ginny as Infanta
and La Blanchisserie, both of superlative quality as
technical performances and exercises in colour;
there was an exquisite Fantaisie by Mr. Charles
Sims; and there were typical pictures by Mr. W.
W. Russell, Mr. Wilson Steer, Mr. H. Tonks, Mr.
W. Orpen, Mr. Brangwyn, and Buxton Knight. A
still-life study by Mr. Sargent, a pastel Les Laveuses
by Lhermitte, and a couple of very beautiful fans

position he has long held among modern
landscape painters. His work is repre-
sented in numerous public galleries in
Great Britain, the United States, and
elsewhere, and he has been the recipient
of many distinctions from Academies and
Societies in various countries.

The reputation of Mr. Alfred Drury as
one of the most able and original of our
present-day sculptors will certainly be in-
creased by the excellence of his most recent
work, the memorial to King Edward VII,
which is to be erected at Aberdeen. In
his design for this memorial he has with
sound judgment aimed at an effect of
dignified simplicity, and has avoided any-
thing which might interfere with the monu-
mental character of his work. He has
treated the whole thing with an admirable
sense of decorative propriety and with a
true perception of what are the greater
essentials in sculpture of this type. What
he has specially kept in view in choosing
his manner of treatment is the situation
the memorial is to occupy—an open space
surrounded by very large buildings against
which anything but simple and firmly
planned forms would look trivial and
unconvincing —- and he has allowed the
exigencies of the site to guide him in
arranging not only the general masses of
the monument but also the decorative
details which have been introduced. Both
the colossal statue of the King and the
pedestal on which it stands are of granite;
the flanking groups, Unity and AW<?,_are
2 t8