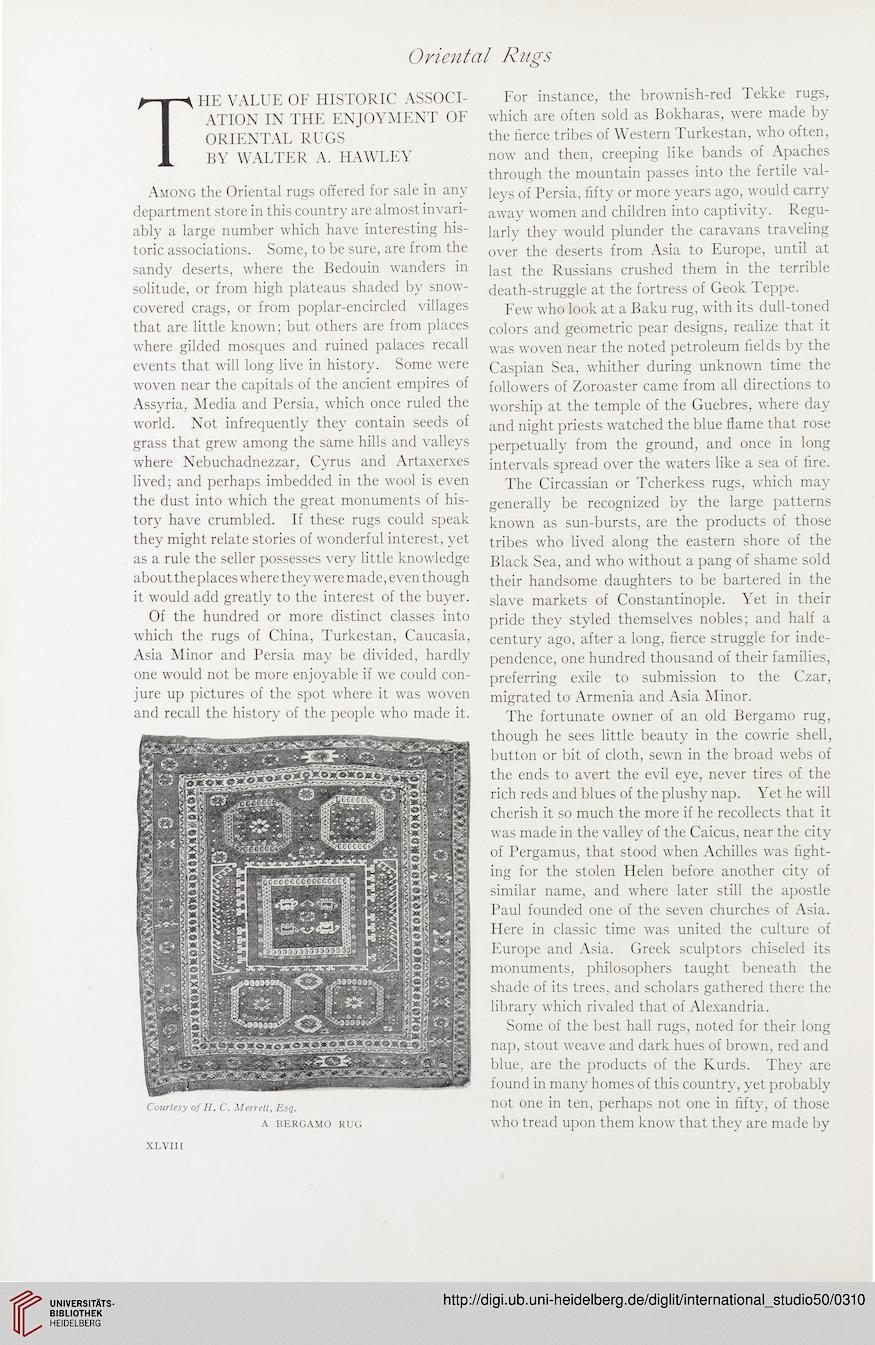 The value of historic associ-
ation IN THE ENJOYMENT OF
ORIENTAL RUGS
BY WALTER A. HAWLEY

Among the Oriental rugs offered for sale in any
department store in this country are almost invari-
ably a large number which have interesting his-
toric associations. Some, to be sure, are from the
sandy deserts, where the Bedouin wanders in
solitude, or from high plateaus shaded by snow-
covered crags, or from poplar-encircled villages
that are little known; but others are from places
where gilded mosques and ruined palaces recall
events that will long live in history. Some were
woven near the capitals of the ancient empires of
Assyria, Media and Persia, which once ruled the
world. Not infrequently they contain seeds of
grass that grew among the same hills and valleys
where Nebuchadnezzar, Cyrus and Artaxerxes
lived; and perhaps imbedded in the wool is even
the dust into which the great monuments of his-
tory have crumbled. If these rugs could speak
they might relate stories of wonderful interest, yet
as a rule the seller possesses very little knowledge
about theplaces where they were made, even though
it would add greatly to the interest of the buyer.
Of the hundred or more distinct classes into
which the rugs of China, Turkestan, Caucasia,
Asia Minor and Persia may be divided, hardly
one would not be more enjoyable if we could con-
jure up pictures of the spot where it was woven
and recall the history of the people who made it.


For instance, the brownish-red Tekke rugs,
which are often sold as Bokharas, were made by
the fierce tribes of Western Turkestan, who often,
now and then, creeping like bands of Apaches
through the mountain passes into the fertile val-
leys of Persia, fifty or more years ago, would carry
away women and children into captivity. Regu-
larly they would plunder the caravans traveling
over the deserts from Asia to Europe, until at
last the Russians crushed them in the terrible
death-struggle at the fortress of Geok Teppe.
Few who look at a Baku rug, with its dull-toned
colors and geometric pear designs, realize that it
was woven near the noted petroleum fields by the
Caspian Sea, whither during unknown time the
followers of Zoroaster came from all directions to
worship at the temple of the Guebres, where day
and night priests watched the blue flame that rose
perpetually from the ground, and once in long
intervals spread over the waters like a sea of fire.
The Circassian or Tcherkess rugs, which may
generally be recognized by the large patterns
known as sun-bursts, are the products of those
tribes who lived along the eastern shore of the
Black Sea, and who without a pang of shame sold
their handsome daughters to be bartered in the
slave markets of Constantinople. Yet in their
pride they styled themselves nobles; and half a
century ago, after a long, fierce struggle for inde-
pendence, one hundred thousand of their families,
preferring exile to submission to the Czar,
migrated to Armenia and Asia Minor.
The fortunate owner of an old Bergamo rug,
though he sees little beauty in the cowrie shell,
button or bit of cloth, sewn in the broad webs of
the ends to avert the evil eye, never tires of the
rich reds and blues of the plushy nap. Yet he will
cherish it so much the more if he recollects that it
was made in the valley of the Caicus, near the city
of Pergamus, that stood when Achilles was fight-
ing for the stolen Helen before another city of
similar name, and where later still the apostle
Paul founded one of the seven churches of Asia.
Here in classic time was united the culture of
Europe and Asia. Greek sculptors chiseled its
monuments, philosophers taught beneath the
shade of its trees, and scholars gathered there the
library which rivaled that of Alexandria.
Some of the best hall rugs, noted for their long
nap, stout weave and dark hues of brown, red and
blue, are the products of the Kurds. They are
found in many homes of this country, yet probably
not one in ten, perhaps not one in fifty, of those
who tread upon them know that they are made by