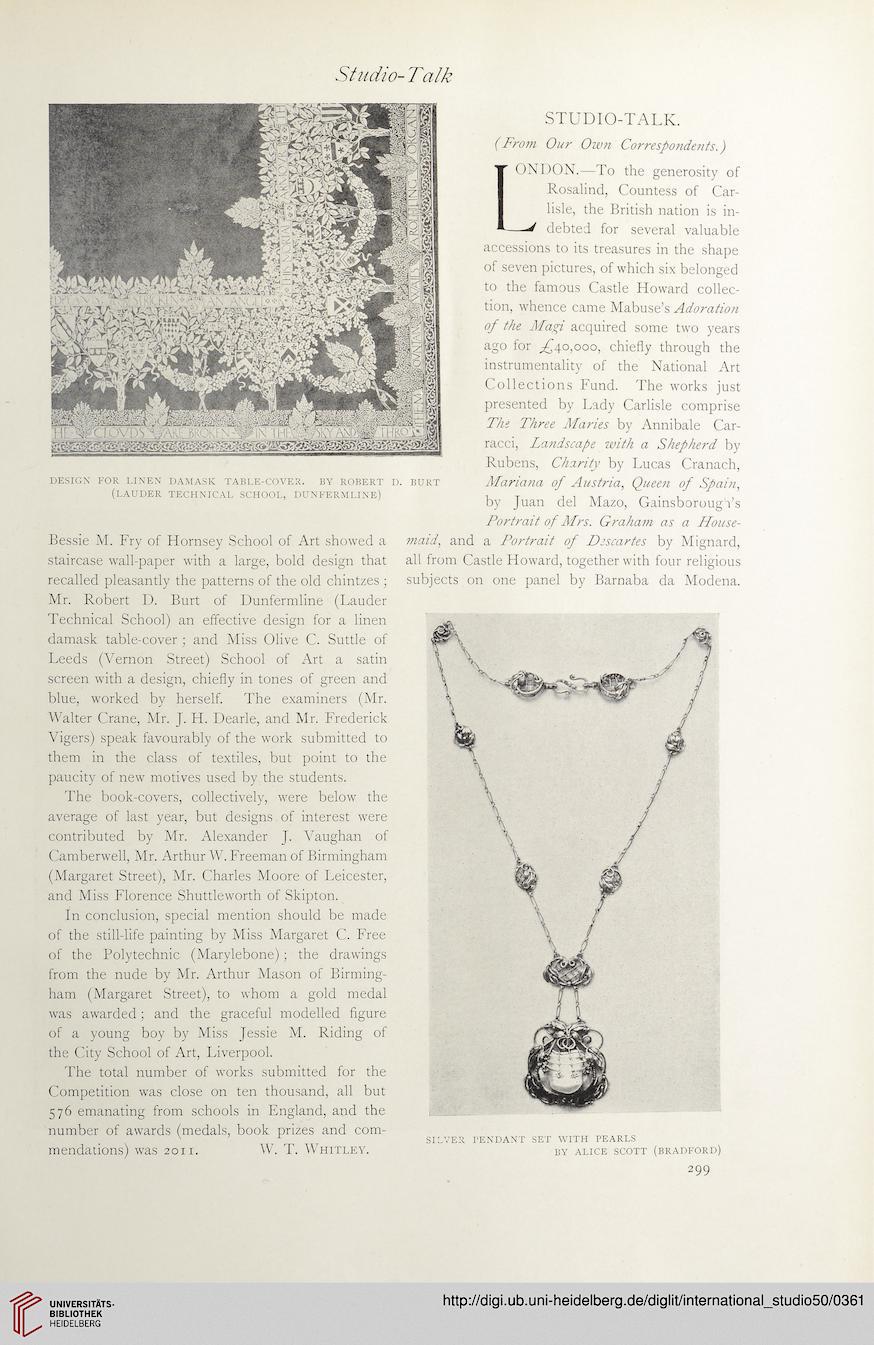 Bessie M. Fry of Hornsey School of Art showed a

T ON DON.—To the generosity of
Rosalind, Countess of Car-
lisle, the British nation is in-
*—-J debted for several valuable
accessions to its treasures in the shape
of seven pictures, of which six belonged
to the famous Castle Howard collec-
tion, whence came Mabuse’s Adoration
of the Magi acquired some two years
ago for Am°>ooo, chiefly through the
instrumentality of the National Art
Collections Fund. The works just
presented by Lady Carlisle comprise
The Three Maries by Annibale Car-
racci, Landscape with a Shepherd by
Rubens, Charity by Lucas Cranach,
Mariana of Austria, Queen of Spain,
by Juan del Mazo, Gainsborough’s
Portrait of Mrs. Graham as a House-
a Portrait of Descartes by Mignard,

staircase wall-paper with a large, bold design that
recalled pleasantly the patterns of the old chintzes ;

all from Castle Howard, together with four religious
subjects on one panel by Barnaba da Modena.

Mr. Robert D. Burt of Dunfermline (Lauder
Technical School) an effective design for a linen
damask table-cover ; and Miss Olive C. Suttle of
Leeds (Vernon Street) School of Art a satin
screen with a design, chiefly in tones of green and
blue, worked by herself. The examiners (Mr.
Walter Crane, Mr. J. H. Dearie, and Mr. Frederick
Vigers) speak favourably of the work submitted to
them in the class of textiles, but point to the
paucity of new motives used by the students.
The book-covers, collectively, were below the
average of last year, but designs of interest were
contributed by Mr. Alexander J. Vaughan of
Camberwell, Mr. Arthur W. Freeman of Birmingham
(Margaret Street), Mr. Charles Moore of Leicester,
and Miss Florence Shuttleworth of Skipton.
In conclusion, special mention should be made
of the still-life painting by Miss Margaret C. Free
of the Polytechnic (Marylebone); the drawings
from the nude by Mr. Arthur Mason of Birming-
ham (Margaret Street), to whom a gold medal
was awarded; and the graceful modelled figure
of a young boy by Miss Jessie M. Riding of
the City School of Art, Liverpool.
The total number of works submitted for the
Competition was close on ten thousand, all but
576 emanating from schools in England, and the
number of awards (medals, book prizes and com-
mendations) was 2011. W. T. Whitley.