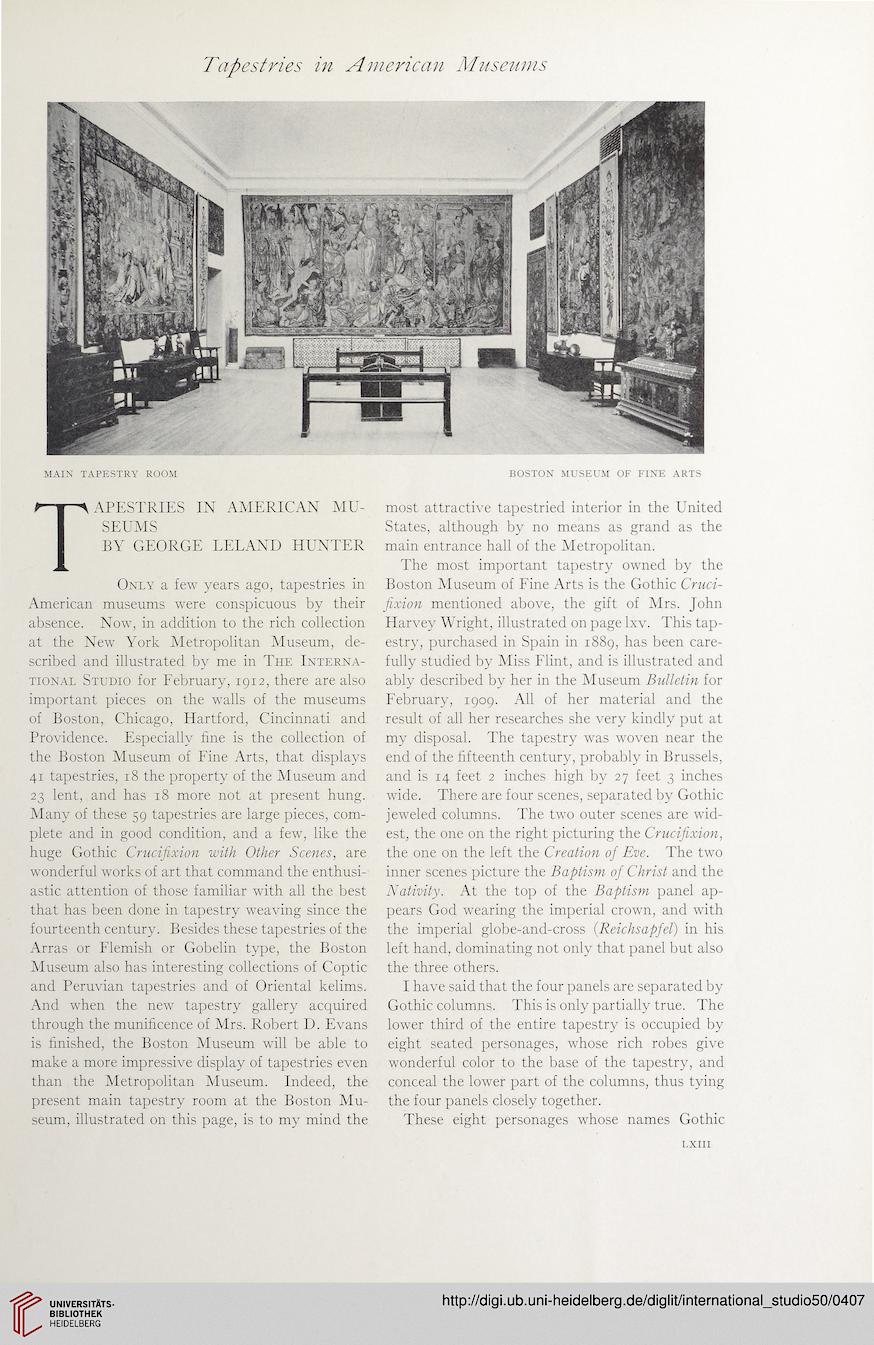 
Tapestries in American mu-
seums
BY GEORGE LELAND HUNTER
Only a few years ago, tapestries in
American museums were conspicuous by their
absence. Now, in addition to the rich collection
at the New York Metropolitan Museum, de-
scribed and illustrated by me in The Interna-
tional Studio for February, 1912, there are also
important pieces on the walls of the museums
of Boston, Chicago, Hartford, Cincinnati and
Providence. Especially fine is the collection of
the Boston Museum of Fine Arts, that displays
41 tapestries, 18 the property of the Museum and
23 lent, and has 18 more not at present hung.
Many of these 59 tapestries are large pieces, com-
plete and in good condition, and a few, like the
huge Gothic Crucifixion with Other Scenes, are
wonderful works of art that command the enthusi-
astic attention of those familiar with all the best
that has been done in tapestry weaving since the
fourteenth century. Besides these tapestries of the
Arras or Flemish or Gobelin type, the Boston
Museum also has interesting collections of Coptic
and Peruvian tapestries and of Oriental kelims.
And when the new tapestry gallery acquired
through the munificence of Mrs. Robert D. Evans
is finished, the Boston Museum will be able to
make a more impressive display of tapestries even
than the Metropolitan Museum. Indeed, the
present main tapestry room at the Boston Mu-
seum, illustrated on this page, is to my mind the

most attractive tapestried interior in the United
States, although by no means as grand as the
main entrance hall of the Metropolitan.
The most important tapestry owned by the
Boston Museum of Fine Arts is the Gothic Cruci-
fixion mentioned above, the gift of Mrs. John
Harvey Wright, illustrated on page lxv. This tap-
estry, purchased in Spain in 1889, has been care-
fully studied by Miss Flint, and is illustrated and
ably described by her in the Museum Bulletin for
February, 1909. All of her material and the
result of all her researches she very kindly put at
my disposal. The tapestry was woven near the
end of the fifteenth century, probably in Brussels,
and is 14 feet 2 inches high by 27 feet 3 inches
wide. There are four scenes, separated by Gothic
jeweled columns. The two outer scenes are wid-
est, the one on the right picturing the Crucifixion,
the one on the left the Creation of Eve. The two
inner scenes picture the Baptism of Christ and the
Nativity. At the top of the Baptism panel ap-
pears God wearing the imperial crown, and with
the imperial globe-and-cross (Reichsapfelf in his
left hand, dominating not only that panel but also
the three others.
I have said that the four panels are separated by
Gothic columns. This is only partially true. The
lower third of the entire tapestry is occupied by
eight seated personages, whose rich robes give
wonderful color to the base of the tapestry, and
conceal the lower part of the columns, thus tying
the four panels closely together.
These eight personages whose names Gothic