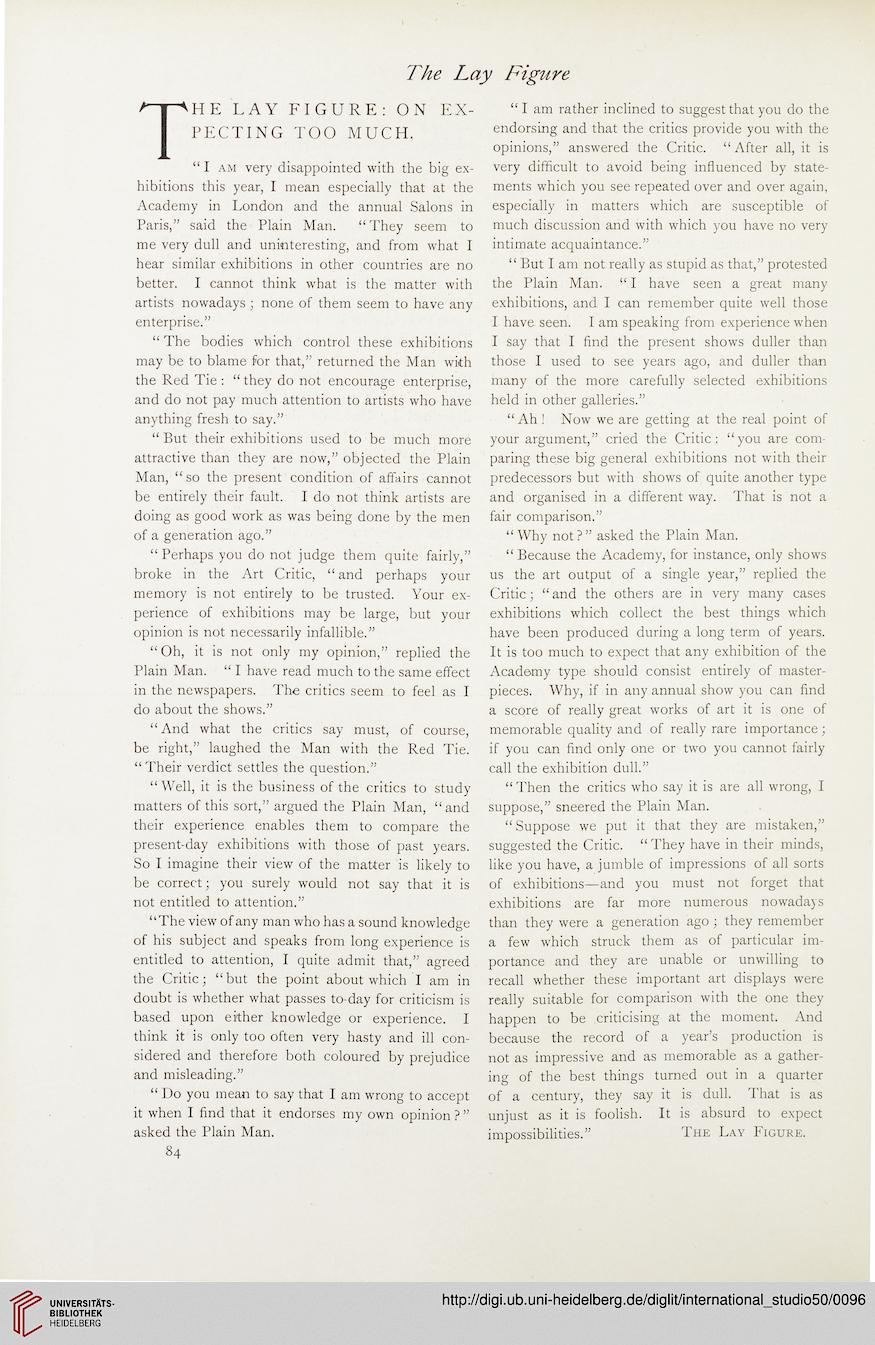 THE LAY FIGURE: ON EX¬
PECTING TOO MUCH.
“ I am very disappointed with the big ex-
hibitions this year, I mean especially that at the
Academy in London and the annual Salons in
Paris,” said the Plain Man. “They seem to
me very dull and uninteresting, and from what I
hear similar exhibitions in other countries are no
better. I cannot think what is the matter with
artists nowadays ; none of them seem to have any
enterprise.”
“ The bodies which control these exhibitions
may be to blame for that,” returned the Man with
the Red Tie : “ they do not encourage enterprise,
and do not pay much attention to artists who have
anything fresh to say.”
“ But their exhibitions used to be much more
attractive than they are now,” objected the Plain
Man, “so the present condition of affairs cannot
be entirely their fault. I do not think artists are
doing as good work as was being done by the men
of a generation ago.”
“ Perhaps you do not judge them quite fairly,”
broke in the Art Critic, “ and perhaps your
memory is not entirely to be trusted. Your ex-
perience of exhibitions may be large, but your
opinion is not necessarily infallible.”
“Oh, it is not only my opinion,” replied the
Plain Man. “ I have read much to the same effect
in the newspapers. The critics seem to feel as I
do about the shows.”
“And what the critics say must, of course,
be right,” laughed the Man with the Red Tie.
“ Their verdict settles the question.”
“Well, it is the business of the critics to study
matters of this sort,” argued the Plain Man, “and
their experience enables them to compare the
present-day exhibitions with those of past years.
So I imagine their view of the matter is likely to
be correct; you surely would not say that it is
not entitled to attention.”
“The view of any man who has a sound knowledge
of his subject and speaks from long experience is
entitled to attention, I quite admit that,” agreed
the Critic; “but the point about which I am in
doubt is whether what passes to-day for criticism is
based upon either knowledge or experience. I
think it is only too often very hasty and ill con-
sidered and therefore both coloured by prejudice
and misleading.”
“ Do you mean to say that I am wrong to accept
it when I find that it endorses my own opinion ? ”
asked the Plain Man.
84

“ I am rather inclined to suggest that you do the
endorsing and that the critics provide you with the
opinions,” answered the Critic. “ After all, it is
very difficult to avoid being influenced by state-
ments which you see repeated over and over again,
especially in matters which are susceptible of
much discussion and with which you have no very
intimate acquaintance.”
“ But I am not really as stupid as that,” protested
the Plain Man. “I have seen a great many
exhibitions, and I can remember quite well those
I have seen. I am speaking from experience when
I say that I find the present shows duller than
those I used to see years ago, and duller than
many of the more carefully selected exhibitions
held in other galleries.”
“Ah ! Now we are getting at the real point of
your argument,” cried the Critic: “you are com-
paring these big general exhibitions not with their
predecessors but with shows of quite another type
and organised in a different way. That is not a
fair comparison.”
“Why not?” asked the Plain Man.
“ Because the Academy, for instance, only shows
us the art output of a single year,” replied the
Critic; “ and the others are in very many cases
exhibitions which collect the best things which
have been produced during a long term of years.
It is too much to expect that any exhibition of the
Academy type should consist entirely of master-
pieces. Why, if in any annual show you can find
a score of really great works of art it is one of
memorable quality and of really rare importance;
if you can find only one or two you cannot fairly
call the exhibition dull.”
“Then the critics who say it is are all wrong, I
suppose,” sneered the Plain Man.
“ Suppose we put it that they are mistaken,”
suggested the Critic. “ They have in their minds,
like you have, a jumble of impressions of all sorts
of exhibitions—and you must not forget that
exhibitions are far more numerous nowadays
than they were a generation ago ; they remember
a few which struck them as of particular im-
portance and they are unable or unwilling to
recall whether these important art displays were
really suitable for comparison with the one they
happen to be criticising at the moment. And
because the record of a year’s production is
not as impressive and as memorable as a gather-
ing of the best things turned out in a quarter
of a century, they say it is dull. That is as
unjust as it is foolish. It is absurd to expect
impossibilities.” The Lay Figure.